INDIA: Hands off JNU, other campuses 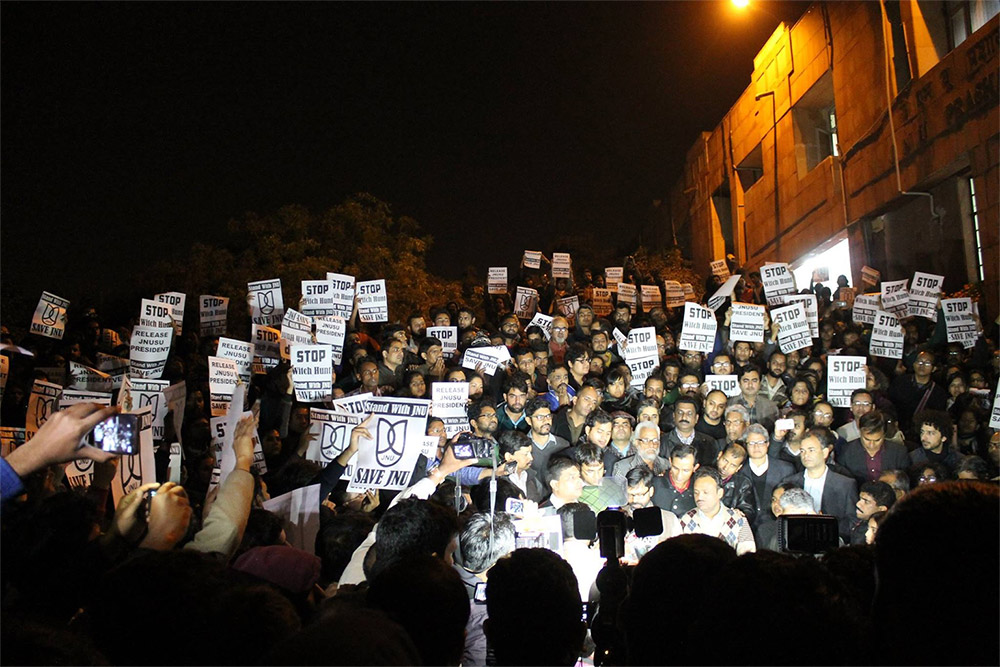 The trouble fomenting in Indian varsities ever since the new government came to power has now reached one of the most prestigious universities of the country, the Jawaharlal Nehru University (JNU). The stir ostensibly started after a group of students organized an event commemorating the death anniversary of Afzal Guru and called his hanging a judicial murder.

The Akhil Bhartiya Vidyarthi Parishad (ABVP), the student group affiliated with the ruling Bhartiya Janta Party took exception to that and accused them of indulging in sedition. The Union government lapped up the accusation and unleashed an unprecedented police action on the campus. The police arrested Mr. Kanhaiya Kumar, the President of JNU Students Union – who belongs to a political group at loggerheads with the organizers of the event – under sedition charges just for his presence at the event.

Unfortunately, a section of electronic media added fuel to fire and presented a rabble-rousing narrative of the events, aimed at inciting passions. They summarily called JNU a hotbed of seditious activities, against all the evidence present. They broadcasted videos whose authenticities they themselves called suspect – videos with anti-India slogans, with no faces identifiable.

They also refrained, inexplicably, from running the video of the speech made by Mr. Kanhaiya Kumar. The AHRC has access to both the video (here) and an English translation of the same (here), and has found that far from being seditious, Mr. Kumar repeatedly asserts his belief in the idea of India, its Constitution, and the rule of law.

The question, however, is not whether his speech was seditious or not. The Supreme Court of India has repeatedly held that mere membership of even a banned organization does not attract the charge of sedition, unless the person engages in violence, as it did when granting bail to Dr. Binayak Sen on 10 February 2011. Jurists like Mr. Fali S. Nariman and former Attorney General of India Mr. Soli Sorabjee have also concurred with this view and both have criticised the Union Government for arresting Kanhaiya Kumar under sedition charges.

It is in this context that the arrest of Mr. Kanhaiya Kumar becomes a dangerous marker of the times to come. His arrest signifies the increasing assault on the freedom of speech by the incumbent government. It also exposes the increasingly dangerous involvement of Union Ministers in the day-to-day affairs of varsities, at the behest of the ABVP, for stifling the voices of those who disagree with their politics.

The case has also seen the highly disturbing intervention of Union Home Minister Rajnath Singh. Mr. Singh has asserted that he has evidence against Mr. Kanhaiya Kumar. The Minister must explain under which law police can share evidence with him in an ongoing intervention into an alleged crime. He must also answer to whether he is not influencing the investigation by such claims and thereby threatening the security of an Indian citizen.

The deplorable crackdown has come high on the heels of intervention of Union Minster of State for Labour and Employment, Mr. Bandaru Dattatreya, and Union Minister for Human Resources Development (HRD), Ms. Smriti Irani, in the University of Hyderabad. Mr. Dattaterya had raised the similar bogey of ‘anti national’ activities against an Ambedkarite group of Dalit students at the behest of the ABVP and sought action from HRD Minister Irani action against them. His intervention led to the suspension of Dalit students and was followed by the suicide of one of them: Rohith Vemula. Vemula’s suicide has led to a great ferment against the government across India.

The police action also continues with the highhandedness of the government in dealing with student protests, as seen in the Film and Television Institute of India and the brutal assault on students in Delhi opposing the scrapping of fellowships by the University Grants Commission.

The crackdown on JNU exposes how there is a threat of India being turned into a police state under the current dispensation. A vicious attack on JNU students and faculty has succeeded the crackdown. This incident occurred inside Delhi’s Patiala House Court, by a group of lawyers shouting patriotic slogans under the watch of the police, which refused to intervene. The students and faculty had gone there to show solidarity with Mr. Kumar, who was to be produced in front of a magistrate after the end of his three days’ police remand.

The lawyers did not spare even the media, which was there to cover the hearing, and went on to the extent of molesting female reporters, something that many of the reporters have stated themselves. The attackers also included a Bhartiya Janta Party Member of Legislative Assembly, Mr. O. P. Sharma, who was caught in the act on camera. Delhi Police’s refusal to charge the identified lawyers and the MLA even a day after the attacks betrays the Union government’s support for the attacks.

On what evidence did the magistrate send Mr. Kumar to police remand first for 3 days? And, then under what grounds did he then extend the same by two more? What kind of prosecution is that relies almost entirely on custodial interrogation without producing any other evidence?

The rot is in the system that has been abused by all governments, the current one has only shown how much further such misuse can go. It is high time for all stakeholders in India’s future to get up and fix the system, while forcing the government to back off from its attempts to stifle voices of dissent and crack down on campuses.