Police excess is quiet a norm in Pakistan but on January 23 police transcend their authority and baton charged school children who were demanding that their school run by trust be reopened and administration not handed over to government. The students of Government Islamia High School near Bhati Gate Lahore along with their parents were protesting outside the school against the school’s takeover by the government. The school was being run by the Ghazi Education and Welfare Trust for nearly eight years, but recently the government took over the charge of running the school’s affairs. 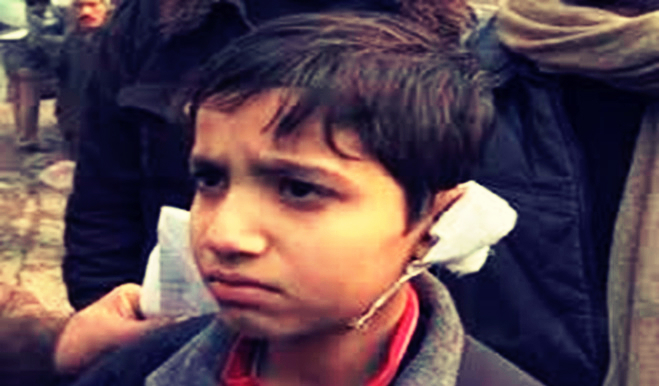 The parents and student of the school were demanding that the school reopens which closed abruptly in the midst of the exam and failed to resume classes. Parents were frustrated over the prolonged closure of the school. The school has been running efficiently for the past several years the sudden change of administration has raised many questions and has marred the academic future of the pupil. The peaceful protest by unarmed parents and school children were brutally baton charged when they didn’t disperse till the afternoon. According to one of the student “the police charged upon us unprovoked,” the police officer according to several eye witnesses baton charged without any discrimination resulting in injury to a student Fahad Ilyas whose father was later forced by the police to take back his statement that his child was injured due to police excess. Police officials later said that the child’s father had given Bhati police a written statement that his son had been injured in the melee that had ensued after police clashed with the protesters. He said that he did not want to pursue an inquiry against the policemen.

This violence against children where innocent children are baton charged for demanding what is essentially their basic right is unprecedented. The monstrosity unleashed upon children in Pakistan has become a norm where child labor, rape and murder of children shatter no soul anymore. The absence of rule of law coupled with unquestioned impunity to the law enforcement and rise of religious militancy has proved to be a devastating potpourri for the masses of Pakistan, who are denied their basic fundamental rights.

The common man is left to fend for himself against the law enforcement agencies and the terrorists. He must suffer in silence or face the wrath of mighty and powerful. Our children too are forced to face the injustice that their parents are trying to in vain to protect them from.

In a so called civilized society the incident was just another day in Pakistan, the Superintendent of Police (SP) Lahore City Asad Sarfraz adding injury to the wound told the parents that he was sorry for the ‘petty’ injury to the student, who needed five stitches. Thus a matter of grave concern was once again brushed under the carpet as a “petty” issue not worth the time of our state functionaries. A requite committee was formed to inquire into the matter while to date no report was filed against the incident.

Lahore police is most notorious for police excesses, on 3rd December 2014 Lahore police baton charged and injured many blind protestors who were staging a rally on Davis Road to advocate for their rights in view of World Disability Day.  In June too, at least 11 Pakistan Awami Tehreek (PAT) workers were killed and over 100 people were injured during a clash with police personnel in Lahore. The incidents of police brutality continue unabated as barbaric laws like PPO and military courts affords the law enforcement personnel more impunity and unbridled powers.

The deteriorating law and order situation demands expedient disposal of justice along with efficient policing, which given the circumstances of the state of police in the country, seems unprobable.Police reforms on the lines of the modern policing methods is the need of the hours. Several attempts at reforming the most corrupt institution have failed in the past due to lack of political will on the part of the legislatures as the police force has become a vendetta force to extract revenge from one’s political opponent.

« INDIA: Cuts in health budget will push millions into poverty