Home / News / NEPAL: Citizens’ Call to the Government to be Sensitive on Ganga Maya Adhikari’s Health

NEPAL: Citizens’ Call to the Government to be Sensitive on Ganga Maya Adhikari’s Health

When the main building of Bir Hospital has been designated as the dedicated hospital for the treatment of COVID-19 patients, it has come to our serious attention that Satyagrahi Ganga Maya Adhikari’s health is at high risk, as she has not been transferred to other safer place, and is still being kept at the hospital with a high risk of contracting the coronavirus from the infected patients. 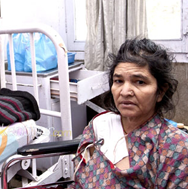 Ganga Maya Adhikari and her husband late Nanda Prasad Adhikari had been staging a hunger strike as a part of Satyagraha since 5 February 2002, demanding no amnesty to those who were involved in the ruthless murder of their innocent 16-year-old son Krishna Prasad Adhikari and bringing the guilty before the Court of law.

The Adhikari couple had been staging fast-unto-death time and again, demanding justice for their son. Unfortunately, on 22 September 2014, the 334th day of the hunger strike, Nanda Prasad Adhikari breathed his last waiting for justice. The fast-unto-death was postponed on the 359th day of the same hunger strike when the Government of Nepal promised to fulfill its commitments to address the demands of Ganga Maya Adhikari for justice and ensure health treatment and security throughout her life. However, her demands for justice have not been fulfilled by the Government, and she has been staging fast-unto-death on many occasions in the Bir Hospital itself, where the Government has kept her.

As Satyagrahi Ganga Maya Adhikari is being kept at the Bir Hospital under Government’s management, more recently the Government plans to designate the same hospital’s main building as the COVID-19 hospital has surfaced in public. There is a high chance that she might contract the virus anytime soon in such a setting and equally high possibility of greater health risk to her life. Hence, we humbly request the Nepal Government and the Bir Hospital’s management to immediately transfer Adhikari to a safer place with adequate health facilities, as per her consent, to save Adhikari’s life.

The State cannot obstruct to exercise the constitutionally guaranteed rights such as the right to live with dignity, the right to health, and the right to justice citing the COVID-19 crisis. As Satyagrahi Ganga Maya Adhikari’s persistent struggle for her right to justice, and the safety of her life is a subject of national and international human rights communities’ legitimate concern, we would like to draw our serious attention of the authorities and urge them to be sensitive to the issue and request them to take necessary measures immediately.