After keeping prominent Pakistan fisher folk leader and front line activist Saeed Baloch incommunicado in illegal and arbitrary detention for eight days, the Pakistan Rangers dramatically produced him in court on January 26. Earlier, the Rangers had denied that Saeed was in their custody. 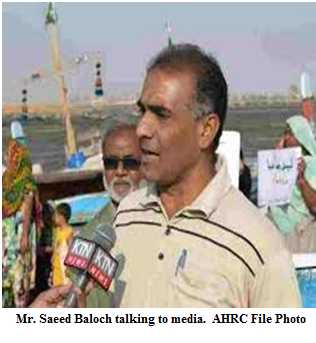 On 16 January 2016, Saeed Baloch was called by phone to the Rangers’ office, after which he disappeared and his phone was not reachable (see here). His wife immediately filed a petition for his recovery in the Sindh High Court single bench on January 17, but Judge Justice Ahmed Shiekh refused to listen to the petition, pointing out that the petition against Sindh Rangers cannot be heard by a single bench. The petition was then referred to the chief justice, who formed a divisional bench consisting of two judges. The bench heard the petition on January 25 and deferred the case to February 1, asking the Sindh Rangers to give comments on the said petition. Suddenly, on the afternoon of January 26, the Rangers produced Baloch in the Anti-Terrorism Court and pleaded that Saeed and three other officials of the Fisherman Cooperative Society (FCS) were arrested from their residence that same day.

According to the statement made by the paramilitary force’s spokesperson, the four suspects were arrested on January 26 within the jurisdiction of the Kalri police station, where during initial questioning they confessed to having funded outlawed Peoples Amn Committee leader Uzair Jan Baloch, Lyari gangster Noor Mohammad alias Baba Ladla and the proscribed Balochistan Liberation Army (BLA) for a long time. These funds were apparently used to purchase weapons for use in Karachi and Balochistan. The spokesman also said that the suspects gave employment to 150 alleged gangsters in the Fishermen Cooperative Society (FCS) at the behest of Uzair Baloch.

Surprisingly, the administrative judge of the Anti-Terrorism court, who is also a High Court judge, granted 90 days physical custody to the Rangers of the four suspects. It is no secret to the Sindh provincial judiciary that Saeed Baloch was illegally kept in Rangers’ custody after he was asked to come for an interview at the Rangers’ Kemari station on January 16. In fact, after Saeed’s disappearance, numerous national and international human rights organisations strongly condemned the paramilitary force’s actions, and called for his release. All sections of local media, together with some international media, gave tremendous coverage of his disappearance. Civil society held a huge protest against his disappearance on January 26, which was shown live by all media. Under these circumstances, how can a High Court judge believe the concocted story of the Rangers, without even referring to the petition pending at the Court?

Judicial ineptness and long undermining the judicial role of guaranteeing the fundamental rights of individuals has led to an acceptance of the primacy of law enforcement agencies. Keeping persons incommunicado is seen as their legal right, and their investigations and statements are the sole basis upon which judicial decisions are made. Pakistan’s judiciary thus plays a silent spectator to the human rights abuse meted out to citizens under the various guises of security, morality and national interest.

When the guardians of constitutional rights play the role of a fiddle in the hands of the military, who will question under what law the police and military are acting, and who allowed them to transgress their authority and extra judicially kill citizens? Why has Pakistan’s judiciary allowed its powers to be usurped by the security forces? It is high time that the judiciary steps forward and stops the evil nexus of the state and the law enforcement, where the latter helps the former in maintaining its writs and reaps monetary and social benefits thereof.

« SRI LANKA: A monk goes berserk in Court and disrupts the proceedings.