INDIA: Fighting Supremacist Majoritarianism a must to end racism 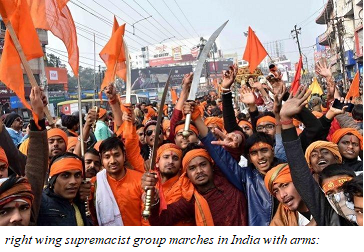 The world is celebrating the 53rd International Day for the Elimination of Racial Discrimination today, on March 21. Sadly, the day marks an ironic, melancholic moment in India. Often referred to as the largest democracy in the world, India is now witnessing apartheid style violence, from mob lynchings, vigilantism and so forth. This is particularly ironic given that India was one of the few countries leading the battle against apartheid in South Africa from the front. It did not relent until the apartheid regime fell, and South Africa joined the comity of nations as a democratic country with no place for discrimination on the basis of birth or descent.

Though the struggle against racial discrimination is as old as racism itself, the day marks a very important moment in the same, as an international solidarity to end racism grew very strong after the gruesome killing of 69 people peacefully demonstrating against apartheid pass laws in Sharpeville by South African police. The killings gave birth to a global outrage and, consequently, a global movement to end apartheid in South Africa in particular and racism in the world in general. Six years later, in 1966, the United Nations proclaimed the day commemorating the victims as of International Day for the Elimination of Racial Discrimination exhorting the international community to intensify its efforts to end all forms of racial discrimination.

It is sadder to see, India, once a leader in struggle against racial discrimination, despite its conservative stance of not accepting caste based discriminations as a form of racial discrimination, finding itself in the list of perpetrators. That it finds that in no less than the UN Special Rapporteur on contemporary forms of racism, racial discrimination, xenophobia and related intolerance in her recent report submitted to the Seventy Second session of the United Nations’ General Assembly only adds insult to injury. To quote from the report itself

“In India, the election of the Hindu nationalist Bharatiya Janata Party (BJP) has been linked to incidents of violence against members of Dalit, Muslim, tribal and Christian communities. Reports document the use of inflammatory remarks by BJP leaders against minority groups, and the rise of vigilantism targeting Muslims and Dalits.”

India has indeed seen an unprecedented surge in vigilante violence and mob lynchings targeting minorities and dalits mostly in the name beef, cow slaughter, and later child theft rumours often with tacit support and horribly, at times with explicit approval of the ruling government. For instance, at least two ministers of the union government of India has openly supported those convicted for mob violence- lynching the members of minorities or rioting against them. One of them, Jayatnt Sinha, a Union Minister of State for Civil Aviation garlanded 8 men convicted for mob lynching a meat trader at his residence in Jharkhand, an Indian state. The other, Giriraj Singh, went to a jail in neighbouring Bihar to meet and show solidarity with those arrested for rioting in neighbouring Bihar.

The report also reiterated the concerns that the Special Rapporteur had shared with the Government of India in a letter in May 2019 over the updating of the National Register of Citizens. The Special Rapporteur pointed out the fears of Bengali Muslim minority, who have historically been portrayed as foreigners despite having lived in India for generations, even preceding the colonial era, that the move was aimed at their disenfranchisement and the loss of entitlements to social protection as Indian citizens.

The Special Rapporteur noted that many affirmed that the updating process was “generally committed to retaining Indian citizens on the National Register of Citizens”. Yet the concerns regarding local authorities in Assam, often particularly hostile towards Muslims and people of Bengali descent, remained. Many fear that they might still manipulate the verification system in an attempt to exclude many genuine Indian citizens from the updated Register.

It is perhaps time for the government of India to reclaim its long-standing history of being a forerunner in the struggle against racial discrimination. It can only do that by reining in supremacist and populist nationalist masses, prosecuting and punishing those indulged in mob violence and ensure India remains that plural, diverse and secular country that it has always been.

« WORLD: Sympathies to the victims of the massacre in New Zealand