Home / News / BANGLADESH: Arbitrarily detained Journalist is at risk of infection with COVID-19 after returning from an enforced disappearance

BANGLADESH: Arbitrarily detained Journalist is at risk of infection with COVID-19 after returning from an enforced disappearance 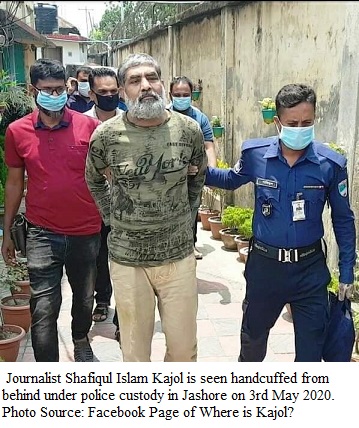 Arbitrarily detained Journalist, Shafiqul Islam Kajol, is at risk of infection by COVID-19 after a prison guard of the Jashore Central Jail is tested positive for the virus on 17 June 2020, as the Asian Human Rights Commission has learned from its sources. Such risk is apparent in Bangladesh where prisons are overcrowded with more than double inmates than their actual accommodation capacities with inhumane condition! The journalist had been detained originally on five separate charges, including three cases filed by ruling party politicians under the Digital Security Act-2018 (DSA). Prior to the ongoing arbitrary detention, Shafiqul remained disappeared for 53 days between March 10 and May 3, 2020. The State-sponsored infringement has caused serious socio-economic pains and embarrassment to the Journalist’s family.

The story of Shafiqul Islam Kajol’s disappearance, followed by arbitrary detention, had begun with a scandal revealed by the Rapid Action Battalion (RAB) in February 2020. A ruling party female wing-leader allegedly used to offer entertainment facilities to high profile elites including ministers, lawmakers, bureaucrats, businessmen, and other professionals. The host of the facility allegedly recorded video footage of the events secretly. This triggered panic amongst the recipients of the entertainment service. As the stories emerged in the media, quoting the officials of law-enforcement and intelligence agencies, many people shared the media reports in the social networking platforms. Shafiqul Islam Kajol, editor of the Daily Pokkhokal and a professional photographer, shared media reports involving the scandals on his Facebook profile.

A ruling party Member of Parliament (MP), Saifuzzaman Shikhor got himself offended by the publication of reports in the media, although his name was not mentioned in the report in a vernacular tabloid on 2 March. 2020. On 9 March, the lawmaker filed a case under Sections 25, 26, 29, and 31 of the DSA with the Sher-E-Bangla Nagar Police Station of the Dhaka Metropolitan Police (DMP) against 32 people, including a number of journalists. A Metropolitan Magistrate of Dhaka had reportedly on March 10 ordered the Police to submit a report on March 20. After the Court heard the case, on the same day, Shafiqul Islam Kajol went missing. He was last seen outside his newspaper office building at Hatirpul of Dhaka, as CCTIV footage was obtained from the scene. Subsequently, two more cases were filed by two female political leaders of the ruling party’s female wing with the Kamranghirchar (Case Number 20, dated: March 10, 2020, under Sections 25, 26, and 29 of the DSA) and Hazaribagh (Case Number 21, dated: March 11, 2020, under Sections 25, 26, and 29 of the DSA) Police stations of the DMP.

Shafiqul’s wife, Mrs. Julia Ferdousi Nayan, registered a General Diary Entry (Number: 772, dated 11 March 2020) with the Lalbagh Police, while her son Monorom Polok, registered a case (Number: 46, dated: 18 March 2020, under Sections 365 and 34 of the Penal Code of 1860) with the Chawkbazar Police of the DMP. Both the General Dairy Entry and the case sought the safe return of Shafiqul Islam Kajol and legal action from the Police.

Journalist colleagues, well-wishers of Shafiqul Islam Kajol, and rights activists staged a human chain to demand his return to his family since his disappearance on March 10. Activists consistently kept demanding to know the whereabouts of Shafiqul in the social media. International human rights organizations raised their voices echoing similar demands.

On May 3, the Bangladesh Police claimed that the Border Guards Bangladesh (BGB) had ‘found’ Shafiqul Islam Kajol trespassing from India at the Bangladesh-India border under the Benapole Police station in Jashore district around midnight. This location was about 300 kilometres from the scene where he was last seen. A BGB soldier registered a case (Number: 5, Dated: 3 May 2020), in the early hours on 3 May, under Section 11 (3) of The Bangladesh Passport Order-1973 with the Benapole Police Station in Jashore. The Judicial Magistrate’s Court of Jashore granted bail to Shafiqul in that trespass case.

The Police, then, registered a General Dairy Entry (Number: 96, Dated: 3 May 2010) under Section 54 of the Code of Criminal Procedure 1898 with the Kotwali Police Station of Jashore. This was, allegedly, for detaining Shafiqul for a prolonged period while the Court granted him bail in the trespass case. In the General Diary Entry the Police referred to the three cases filed under the DSA in three separate Police stations in Dhaka. In order to make the process of Shafiqul’s release from jail more complicated, the Police initially did not show him arrested under those three DSA cases. As a result, Shafiqul does not become legally eligible for seeking bail against those three cases. On 18 May, 15 days after the arbitrary detention, the Kotwali Police of Jashore submitted a petition to Chief Judicial Magistrate Court of Jashore seeking discharge Shafiqul from the General Dairy Entry number 772. In response, the Court discharged him.

The Asian Human Rights Commission has checked the certified copies of the decisions made by the Judicial Magistrate’s Court of Jashore in relation to the detention of Shafiqul Islam Kajol. The documents suggest that, on 20 May, the Kotwali Police claimed in the police report that the Chief Metropolitan Magistrate Court of Dhaka had issued three separate Production Warrants for arresting him in those three cases registered under the DSA with the three separate police stations of the DMP. However, the police report has not specified any date of the issuance of the Production Warrants against Shafiqul Islam Kajol.

Amid the COVID-19 pandemic, Bangladesh’s Judiciary virtually functions, essentially, to deal with a limited number of cases. Police, on one hand, take advantage of the absence of regular proceedings of the Courts and do not officially show Shafiqul ‘arrested’ to use the loopholes of criminal procedures, according to Shafiqul’s family. The Judiciary, on the other hand, keeps the bail hearings pending. The Detective Branch of the DMP has, reportedly, sought from the Court, on 14 May 2020, that Shafiqul be remanded in Police custody for 10 days. This is an excuse for recovering his Facebook account and arresting his accomplices. The Court has scheduled to hear the Police request to show that Shafiqul was arrested on 28 June 2020. The actions of the Police and the Courts indicate that the on-going detention of Shafiqul is going to be prolonged for a longer period.

Monorom Polok, Shafiqul’s son, in an interview, told the Asian Human Rights Commission about his family’s struggles for the past 100 days. “We have spent everything we had, as a middle class family, since my father went missing. The others may have no problem due to my father’s current situation. But, for me, it is my father without whom I cannot live my life.””Despite numerous challenges we have not given up!” The young university student of his early 20 years said, “We do not want my father to become infected with COVID-19 in the unhygienic prison conditions.” The family had to spend an enormous amount of money searching for Shafiqul and paying for his litigation costs due to logistic expenditures and corruption in the judicial administration in Bangladesh that often remain invisible.

The Asian Human Rights Commission is aware of Regulation 261 (c) of the Police Regulation of 1943, which reads: “Circle Inspectors shall see that investigating officer complete their investigations as required by section 173, Code of Criminal Procedure, and that the previsions of clause (b) are not abused. If the directions in clause (a) are strictly observed, it should rarely be necessary to prolong the investigation of even the most difficult case beyond 15 days.”Regrettably, the Investigation Officers of the three cases against Shafiqul Islam Kajol, and the superior police officers, have not performed their mandatory duties of completing the investigation of the individual cases as prescribed in the Police Regulations, as there is hardly any accountability on merits of the policing in Bangladesh.

Bangladesh’s justice mechanisms have long records of intra-complicity in maintaining impunity at the costs of people’s lives, livelihoods, liberties, and human dignity. The family of journalist Shafiqul Islam Kajol has been going through unspeakable grief, pain, and harassment for the last 100 days since his disappearance. Searching for a victim of enforced disappearance and five trumped-up cases is beyond anyone’s imagination. Only the sufferers know the financial, social, and psychological plights.

BANGLADESH: Government must end torture and fully implement recommendations made by the UN Committee against Torture »