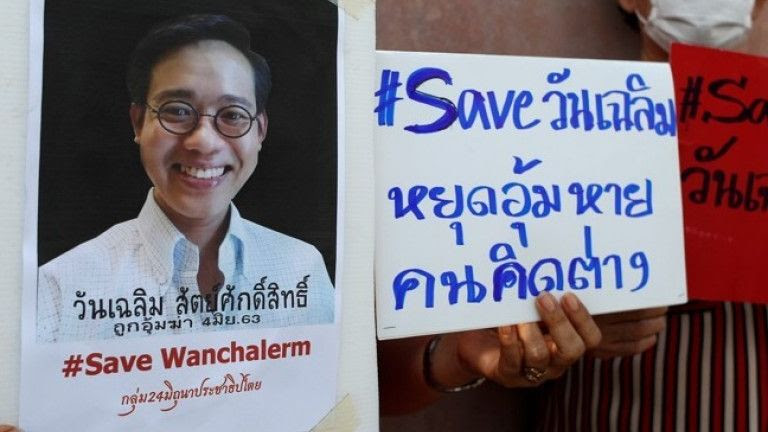 Unidentified assailants abducted Wanchalerm in front of his residence in Phnom Penh, Cambodia, on 4 June. Following the 2014 coup when the ruling Pheu Thai government was ousted by the military, Wanchalerm fled to Cambodia in fear of reprisals. Wanchalerm was affiliated with the Pheu Thai party. In 2018, he was issued with an arrest warrant for allegedly violating the Computer Crime Act over his role as an administrator of an anti-government Facebook page.

Wanchalerm’s disappearance prompted outrage on social media. Peaceful gatherings in Thailand calling for a thorough investigation were held, although authorities cracked down on them. Student activists were detained and charged for tying white bows at the Democracy Monument and several other government buildings over the past two weeks.[1] At least ten other demonstrators were summoned for allegedly carrying out an unlawful assembly and violating the Emergency Decree.[2]

‘Thailand’s actions towards Wanchalerm and other activists are the exact actions that human rights defenders are fighting against. The government should focus on finding Wanchalerm instead of targeting those who call for accountability,’ said Shamini Darshni Kaliemuthu, Executive Director of FORUM-ASIA.

Wanchalerm is not the first Thai activist to have been disappeared while in exile. Since 2016, at least eight other exiled Thai activists have been abducted under unknown circumstances. Two were found dead near the Thailand-Laos border in December 2018.[3]

These enforced disappearances demonstrate the precarious situation of Thai dissidents even after fleeing the country. In the first place, they should not have to feel the need to leave merely for exercising their fundamental rights.

‘If Thailand is to build public trust, they must commit towards ensuring the safe return of Wanchalerm and the other disappeared human rights defenders. The government should take genuine steps towards institutionalising better protection for all activists and human rights defenders,’ said Ichal Supriadi, Secretary General of the Asia Democracy Network.

Until the Thai government can demonstrate its commitment and proactive measures taken towards upholding the security and safety of all activists and human rights defenders, it will continue to face public doubt on any political will in resolving cases of disappearance, said the rights groups.

The Asian Forum for Human Rights and Development (FORUM-ASIA) is a regional network of 81 member organisations across 21 Asian countries, with consultative status with the United Nations Economic and Social Council, and consultative relationship with the ASEAN Intergovernmental Commission on Human Rights. Founded in 1991, FORUM-ASIA works to strengthen movements for human rights and sustainable development through research, advocacy, capacity-development and solidarity actions in Asia and beyond. It has sub-regional offices in Geneva, Jakarta, and Kathmandu. www.forum-asia.org

The Asia Democracy Network (ADN) works to promote and advance democratisation and democratic governance at all levels of society through effective solidarity and cooperation among civil society organisations and democracy advocates in Asia. ADN is committed to building a just, equitable and sustainable community of democratic societies in Asia, where all human rights of all individuals, groups and peoples are fully respected and realised. www.adnasia.org

BANGLADESH: Arbitrarily detained Journalist is at risk of infection with COVID-19 after returning from an enforced disappearance »