Children with sunken eyes and protruding bones, struggling to breathe; mothers watching haplessly as their children die in front of their eyes; this sad reality was not happening in Somalia or Ethiopia, but in a country that is the seventh atomic power of the world. The ongoing drought in Pakistan’s Tharparkar district, Sindh province has devoured at least 650 children during the last three years, with more than 562 dead in 2014 alone, according to media reports (http://www.pakistantoday.com.pk/2014/12/14/national/thar-death-toll-climbs-to-562-as-two-more-infants-die/). Tharparkar district covers over 22,000 square kilometers, with a population of around 1.5 million. The region is termed as “the only fertile desert in the world”, yet has the lowest Human Development Index in all of Sindh.

The first 14 days of 2016 saw some 55 children dying of malnutrition, pneumonia and an outbreak of water born diseases in Tharparkar and adjoining areas. Forty children are still under treatment in different towns of Islam Kot, Mithi, Chachro, Nagar Parker and other areas, but all hospitals lack adequate facilities for the nursery wards. 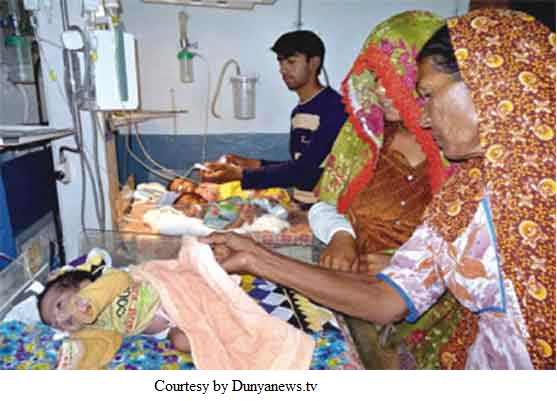 Two provincial ministers who visited the area blamed underage marriages and carelessness of mothers for the child deaths. Moreover, they noted that only 19 children died in Thar hospitals, while a few newborn babies died in remote villages while going to hospital. The ministers blamed the media for depicting a doomsday like situation in Thar.
Despite print, electronic and foreign media all reporting the same child death statistics, the government continues to deny the figures. The provincial food minister has also attributed the sudden rise in child deaths due to a lack of awareness about handling newborns, and mothers’ delayed arrival at medical facilities.

Yet, the government has not taken any serious action to provide adequate health and food access for pregnant women. According to a report submitted in Sindh High Court by the Chief Secretary in December 2014, the majority of people living in Thar are Hindu, who do not eat meat or fish, and rely on vegetables, chilies, dairy and other local products for their nutritional needs. Their intake of proteins/energy/fats and other requisite calorific values is thus relatively lesser. The report therefore concludes the weakness in women revolves around the non-consumption of a protein-rich diet, as well as their cultural patterns.

For many years the Tharparkar region has had persistently high rates of acute malnutrition exceeding emergency thresholds. Rates of severe acute malnutrition (SAM) are particularly high, with a national average of 5.8%. Pakistan is second only to India in contributing to the global burden of SAM. The majority of SAM cases are under 24 months old.

For the past two years, the Tharparkar district is facing serious drought. Low rainfall in 2013-14 and its impact on food stocks and livestock, together with poor sanitation and hygiene, limited availability of clean drinking water, limited access to health care services have all aggravated the nutritional situation further. The media is now reporting a rise in morbidity and mortality (http://www.hands.org.pk/2012).

Parents of sick children have complained that doctors at Thar’s main hospital, Civil Hospital Mithi, refused to admit their sick children and asked them to go to Hyderabad, 150 kilometers away, for treatment. Even parents of children who were admitted, were also forced by doctors and paramedics to go to other cities for proper treatment. According to the parents, it was an attempt by health officials to hide their incompetence and divert attention from the fact that children were again dying of malnutrition and other diseases.

People have no access to clean drinking water, food supplies, appropriate dwellings or shelter from heat. Despite high casualties—the death of more than 600 children and livestock losses over the last three years—the calamity that has engulfed many lives is yet to be effectively addressed by the government. People are forced to borrow money from moneylenders on 100 percent interest for staple food, fodder and medical treatment.

Moreover, the government has done little to improve health facilities. No efforts have been made to fill the 134 vacancies for doctors in Thar District. Only 298 doctors are available, which includes child specialists and female doctors. Over 215 dispensaries remain non-functional in Thar’s remote villages. According to inquiries by Dawn, of Tharparkar’s 26 posts of doctors, 25 are vacant.

The Sindh government must come out of its inertia and take concrete steps to address the problems facing Tharparkar district. Rather than blaming early marriages and careless mothers in a reactive manner to the crisis, it should take proactive responsibility to secure the life and dignity of its citizens and children. The government should immediately provide Thar with portable water and reinstate the reverse osmosis plants installed to provide water to rain-dependant inhabitants of Thar. It should increase funding to the Civil Hospital in Mithi and to the Basic Health Units in the villages and towns of Thar. The plans of Benazir Bhutto Dastarkhawan, Mithi Nursing Hospital, Thar Water Management Board and Thar Food Bank announced by the PPP-led Sindh government, should be urgently implemented. Health and nutrition education should also be provided to women.