Home / News / PAKISTAN: Has the country abandoned its children?

PAKISTAN: Has the country abandoned its children? 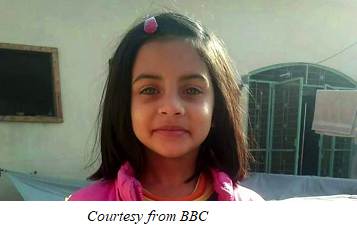 Seven-year-old Zainab from Punjab Province’s Kasur District could not have foreseen her life cut short, but the Punjab Government and law enforcement were aware of the statistics; 11 children abused every day. During the past 12 months, 12 girls between the ages of five and eight have been killed in the area where Zainab’s dead body was found. The suspect appears to be a single man involved in all the murders, yet he goes scot free. The law enforcement agencies are oblivious to the pattern of murder.

The uproar on mainstream and social media led to District Police Officer Zulfiqar Hameed’s suspension, suo motu notices were issued by the chief justices of the Supreme Court and the Lahore High Court, and there was condemnation from all corners, including civilian and military leaders. But it all ends here; jibes on the societal attitude to rape and sexual abuse result in a tweet or two, and then it is back to a blissful slumber.

Though Zainab’s murder hit the national chord, many other victims of rape and murder remained oblivious to media frenzy.Strangely all the incidents occurred in different parts of Pakistan’s most populated province Punjab.

Yet the disturbing incidents of child sexual abuse are increasing in frequency. On 31 October 31 2017, a 16-year-old girl was paraded naked on the orders of a Jirga in DI Khan Area of Khyber Pakhtunkhwa province. She was made to suffer this ‘punishment’ because of her brother’s relationship with a girl.

The rape and murder of Zainab and other children are a direct result of the society’s collective failure to protect its vulnerable groups. The state and judicial ineptness to take preventive measures to curb such horrendous incidents cannot be highlighted enough.

Kasur has become the hub of child sexual abuse in Pakistan, with over 700 cases of child sexual abuse being reported since 2015. In 2017, 129 child assault cases were reported from Kasur, yet hundreds more go unreported due to the shame and taboo associated with the issue, as well as victims’ reluctance to take the matter to the police. Pakistan’s worst child abuse scandal was unearthed in 2015, in Kasur District: more than 200 children were filmed while being sexually abused from 2009 onwards. The gang responsible for these pornographic videos is yet to be indicted; in fact, due to Pakistan’s weak prosecution and investigation system, the culprits were given the benefit of the doubt, and the anti-terrorism court acquitted four suspects in August 2017.

Pakistan’s ineffective and inept justice system has failed to give even minor punishments to sex offenders. It is the responsibility of the Courts to levy correct punishments on those accused. Compromises in cases of the murder of underage children should not be allowed. Though medical evidence is against the accused in almost all cases, these are overlooked by the lower courts. The sickening trend of bribes is so rampant, that not even the aggrieved family of the murdered child is spared. Zainab’s uncle for instance, was asked to pay Rs 10,000 to the police officer who found her dead body dumped in the garbage for successfully “locating” Zainab.

The failure to prosecute these crimes has encouraged their frequency and barbarity. Moreover, law enforcement agencies are found to have a stake in such crimes. In the Kasur child pornography case, police officers were involved in protecting and abetting the gang.

Leading policy and advocacy group, Children Advocacy Network- CAN Pakistan, has expressed disappointment over the delay in adopting policy measures to ensure the protection of children from all forms of abuse and exploitation. The Government of Punjab, one year after the Kasur child sexual exploitation scandal, is yet unable to come up with concrete policy reforms, legislative development and behavioral change programs, to reduce threats of violence against children.

According to the Children’s Right Index, Pakistan ranks 159 out of 196 countries in the world in terms of child mortality, health and education facilities and protection of child rights. This is largely due to the lack of seriousness from all quarters to improve the conditions faced by children in the country. It is incumbent upon the State, being the guardian of its citizens, under the doctrine of Parens Patriae, to protect the country’s children. The State’s omission to act is criminal,and against the provisions of Article 35 of the Constitution. Despite the ratification of the UN Convention on the Rights of the Child, Pakistan has remained off-track on various Millennium Development Goal indicators, including those related to education, maternal health and infant mortality.

Since the 18th Amendment in the constitution, child protection has become the sole purview of the Provinces. The Provincial Governments have failed however, to enact Provincial Laws to ensure the protection of children. The Provincial Governments should establish a Child Safety Cell in every district. There is a dire need for a Provincial Action Plan to protect children from torture, abuse andviolence. The provinces should also set up an effective awareness campaign for the protection of children, and introduce new legislation to protect children and other vulnerable groups.