Home / News / PHILIPPINES: The narrative of a torture victim: a quest to clear one’s name eleven years on

PHILIPPINES: The narrative of a torture victim: a quest to clear one’s name eleven years on 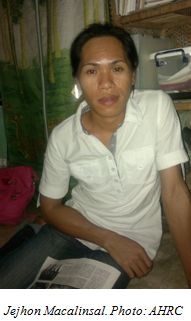 He is Jejhon Macalinsal. To those who know him he was a young activist, those that did not would fear him. In April 2002, he and two others were arrested, tortured and detained after the police illegally raided their home and planted explosives for which they were charged with possession. They were linked to a bombing at Fitmart, a mall in General Santos City, in which 16 people were killed and many others wounded.

It took eight years for a judge at the Regional Trial Court (RTC), where they were charged for possession of explosives, to conclude the evidence that the police produced in court had been planted. Though Jejhon and his co-accused were, in fact, never charged for deaths in connection with the bombing, the police and journalists have portrayed them as the ‘Fitmart mall bombers’.

Jejhon’s family and of his co-accused, Abubakar Amilhasan and Arsul Ginta, exhausted all means by seeking help here and there, begging help from friends who possessed land titles, to lend their property to them as deposits in court for their temporary liberty. A year following their arrest, they were released on bail using money they collected from pawning certificates of the land titles they borrowed. In detention, in the absence of any form of rehabilitation, treatment and counselling (because in jail there is nothing at all), Jejhon tried coping by doing it on his own.

Sharing his experience on how he recovered, Jejhon said: “I did it myself. I just helped myself. I told myself that no one could help me but myself.” But even outside the walls of the prison cell, Jejhon realised that no one could offer the help he needed but himself. In the Philippines, when laid with criminal charges, whether one is innocent or guilty, is automatically judged a criminal. The presumption of innocence only appears in law books, not in the hearts and mind of people.

Jejhon and his co-accused had to endure this difficulty–from reintegrating in society, coping with the trauma of torture, finding employment, and so on. But Jejhon, in his words, had his break when he was first employed as a clerk, then later as writer for a local tabloid in General Santos City. It made him human, again. However, he was only able to do it by not openly admitting that he was one of those ‘Fitmart mall bombers’. Some of his colleagues in his newspaper may know, but the public for whom he writes, would not.

Speaking to me, Jejhon said of this experience in getting employment: “I felt I was human again. You know, that feeling: before they write about me as a bomber; but now, I go to police camps. I write about what they ought to do. They knew full well that I was the one they tortured. I felt I was worthy, again.”

In November 2010, on the day the court rendered its judgement, Jejhon recalls, “I was so nervous. I didn’t know what to do, what will happen, and what the final judgement would be. The policemen who tortured me were just sitting in front of me.” For him, the delay in the trial of their case made him end up a person not only being tried in court, but now as a community journalist, he himself has to write about it. He was, literally, not only a journalist who writes a story, but the story itself.

While Jejhon is, to some extent, able to cope and get over his own suffering, and is integrating into the Filipino society in the absence of state-sponsored assistance, his co-accused hardly had any of these opportunities. For Abubakar and Arsul, the suffering they would have to endure as belonging to an ethnic minority Maguindanaon tribe, their lack of adequate education, and so on, was harder. It was difficult for them to either to integrate or get employment. Going back to a remote village to farm or do manual labour was the best they could do, even before they were arrested, torture and detained.

In the city where Jejhon, Abubakar and Arsul live discrimination against the ethnic minorities, notably the Moro people, is deeply rooted. It was not surprising they would be the easy target of arrest resulting from bomb attacks. The Moro people are often the usual suspects by the police and the military to be arrested. It is a public knowledge, in the past and in present, that should a bomb attack happen in a place, within a few hours the police will arrest a member of the Moro people. They would be tortured to confess, charged in court and the police would then declare the case ‘solved.’

In Jejhon’s case, while the police, notably Sr. Supt. Bartolome Baluyot, former regional director of the police, declared the cases of the Fitmart mall bombing solved in just few days following their arrest, it took eight years for the victims to clear their names. And, even though they have already been acquitted from the fabricated charges, they were cleared only as innocent persons in court documents, not in the eyes of the police, the journalists and people who still perceive them to be guilty, troublemakers.

In fact, the records of the ongoing and increasing numbers of arrest, detention and torture of persons, notably those who belongs from the Moro community, attest to the deeply rooted and held discriminatory practices by the police, prosecutors and court judges towards the Moro suspects. Thus, Jejhon, like many other torture victims, suffer manifold abuses of their rights and would have to cope, on their own, in absence of any help from the State.

I pay tribute to him, his co-accused and many other nameless Filipinos who continue to suffer and struggle to survive on their own, to tell themselves that, they too, like us are human beings. They deserved to be treated like us. If we accept as justifiable how they were treated for eight years and longer then we must ask ourselves: what are we?

SOUTH KOREA: How long will the government let Samsung have its own way in denial of the Constitution?  »