Home / News / PAKISTAN: The marvelous Malala – a real moment of joy for women

PAKISTAN: The marvelous Malala – a real moment of joy for women

A tribute by Bushra Khaliq

Well done, Malala! Every Pakistani is proud of you. Today you have made our head high. After Dr. Abdus Salam, Malala is second person who has shown other side of Pakistan and introduced terror-torn Pakistan’s soft face to the world and provided us a moment of real joy. For all women and specially women of Pakistan, it is a bright moment in dark times, when no respite in persistent repression against women. 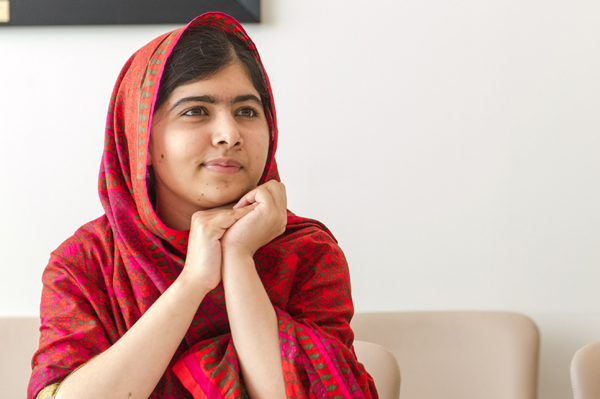 A candid photo of education advocate Malala Yousafzai prior to her meeting with Deputy Secretary-General Jan Eliasson. Ms. Yousafzai is at the United Nations today for a special event to mark 500 Days of Action for the Millennium Development Goals (MDGs). – UN Photo/Mark Garten

Malala Yousafzai-who survived murderous attack by Taliban in October 2012- was globally recognized as fighter for the girls’ right to education. Since then Malala has become the flag bearer of girls and women rights. Her sacrifice highlighted the cause of girls at global level and inspires those who were scared of terrorists and fundamentalists. She challenged the orthodoxy with unique courage, which many of us lack.

The Nobel Prize is beautiful endorsement to the marvelous courage of Malala. It is reminder to many of us that fighting for justice is a Nobel cause. Whosoever is doing this deserves respect and acknowledgment. This young girl is now a peerless symbol of resistance and defiance that few of us can even hope to aspire. She is someone who dared to stand up as a child, alone and defenseless, to the fundamentalists. She believed that one book, one pen and one girl can change the world. The fierce force of fanatics could not shatter her classical resolve.

In a region torn with terrorism, where women are oppressed since centuries, Malala dared to stand up declaring she was no longer willing to accept the oppression on girls by the patriarchal and fanatic forces. In a decadent society where girls’ education has long been criminally relegated, Malala refuse to accept the anti-women prevailing cultural, social and political norms through her resolute stance against forces of the darkness. In a patriarchal society where debilitating gender apartheid in all spheres of life is inhumanely tolerated, Malala’s clear voice is a reminder of prevailing patriarchy that continues to brutalize women in this country.

What should shame us is that dominant forces has pushed this society to the point where a girl demanding education her right, had to flee from this country for her life while millions of us could only mock her to feed our insatiable appetite for conspiracy and extreme proclivity for collective denial. It is sad that many Pakistanis still consider it as western conspiracy and mainstream media tends to present Malala as part of so-called anti-Pakistan campaign. Equally sad is persistent societal denial to Dr. Abdus Salam- the first Pakistani scientist acknowledged by the world.

The sharing of Nobel Peace Prize by Kailash and Malala is also a good message for the people of India and Pakistan. Let’s win together! Thanks Malala. You are true face of Pakistan. This is the best way to defeat extremism and Talibabanization. Keep it up.