The 2014 floods in Pakistan is the fifth in series of floods since 1973, 1988, 1992 and 2010. This time the late monsoon rains [in the early part of] September unleashed terrific floods in Central Punjab. Swollen rivers, particularly the Chenab breached floodwalls, sweeping away thousands of villages and the Government despite warnings from the Met office turned a deaf ear, [and exposed] the people [to] the mercy of the calamity. 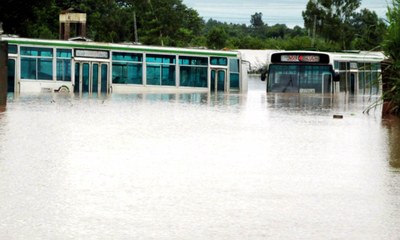 A view of buses drowned in flood water in River Chenab. — Photo credit: The Dawn

The untamed rivers have wreaked havoc on the lives of the people. So far, over 2 million people are affected and more than 300 more are killed and the livelihoods of several millions are at stake. According to [National Disaster Management Authority] Sic. NDMA, 45,000 houses were destroyed and 3,000 villages [have been] submerged. A total of 10 districts of Punjab are affected, of which Jhang, Chiniot and Hafizabad were severely hit.

Crops and orchards [spreading across] 200,000 acres of land including cotton, rice, sugarcane and other commodities have been damaged. The land under water is the prime source of agricultural produce of the country. In other words, the entire area are Pakistan’s breadbaskets, [are reeling] from these floods.

It is a colossal failure of the state authorities to protect people from predictable disasters like the recent floods. Apparently [the Government] Govt. has miserably failed to learn any lesson from the 2010 super floods. The missing links in policy and implementation plans are still missing after four years of the 2010 super flood. Not a single meeting of the NDMA has held after 2012. Reports by the flood commissions are gathering dust on the shelves and the government is giving lame excuses as to why the reports were not attended to.

Successive governments/regimes in Pakistan have failed to invest in construction of water reservoirs and other infrastructure needed to regulate water levels through wet and dry seasons and continued relying on the decades old irrigation and canal system built [during] the British era.  Every [Government]  puts the  blame on their predecessor for this failure. However, there is no doubt that [the] mass devastation caused by these floods was the result of [such government] inefficiencies.

However, interestingly jihadists and even some so-called flood experts have found it convenient to blame an Indian conspiracy to submerge Pakistan instead of emphasizing the poor levels of preparedness for flooding on this side of the border. Maulana Hafiz Saeed of Jamaatud Dawa has blamed India for the current devastating floods that have submerged swaths of Pakistani countryside and claimed hundreds of lives. “India irrigates its deserts and dumps extra water on Pakistan without any warning to destroy Pakistan agriculture”. In a similar vein, Jamaat-i-Islami Ameer Sirajul Haq did not miss the opportunity to castigate India for exacerbating the flooding in the Chenab.

These religious forces fully exploit the inability/inefficiency of the local authorities struggling to cope with floods and sustain the chronic tension with India. But the real question is even if there was a timely warning from India that this was about to happen, would the [Government] have heeded it? Would the Government have the institutional capacity to take the right steps?  Perhaps no; instead of blaming India, we must accept that authorities were not prepared for floods.

Institutional capacity of the NDMA and the Federal Flood Commission – the two main bodies to tackle floods, is a matter of grave concern. Both [these] institutions lag behind from their stated objectives and responsibilities. Despite the fact that the NDMA has better resources at hand, [conducts] some trainings and evolved contingency plans, but [does] little to implement those plans.

Like [the] previous floods in 2010, the impact of the recent floods on human rights is immense.  Media reports show miserable conditions of people in the flood-hit areas. There are reported gaps in provision/distribution of relief items. There is no organized system of distribution of relief goods. Through TV [footage] it is not difficult to guess the total ‘free-for-all situation’ at the distribution points. The poor and weaker have no chance to get their due share; you have to be stronger enough to get relief items. Thus floods have disproportionately affected women, children and persons with disabilities, particularly those living in rural areas.

Women, especially girls, already known [that they] have been denied access to basic rights in disasters; food, medicine and shelter, have become further vulnerable as result of current calamity. The situation may heighten the risk that women and girls be discriminated against, sexually abused and trafficked. They need special attention of relief and humanitarian assistance teams. This segment of society is particularly vulnerable and [there is a] strong possibility of [the lack of] access to relief aid, health, education and other essential services.

Although the immediate flood surge has now largely passed through Punjab, it was only the start of the emergency, which was likely to bring a range of additional hardships and further threats, particularly in rural areas. As the floodwaters begin to recede, the damage in many villages is acutely apparent among a sea of mud.  According to media, the situation was dismal and flood affectees particularly children were suffering from various diseases like diarrhoea, eye infections and skin diseases. At some places the villagers have little access to food, limited water and no access to medicine.

[However,] government activities tell another story. [The government] does not seem [to be] serious about tackling the issue on a permanent basis rather; it is taking the natural disaster as a photo-op and telling the people it was God-sent disaster. According to Metrological experts, the frequency of flash floods has increased in recent years and will continue to rise in the future in the wake of the shifting monsoon zone caused by climate changes in the region. If [the Government] cannot control flooding, it can at least control damage to life and property by being better prepared for it. For how long [do the] people of Pakistan continue to drown?

The writer is executive director of Women in Struggle for Empowerment (WISE), she can be reached at; bushra.khaliq1@gmail.com

« PAKISTAN: In Memory of the desecrated All Saint’s Church, Peshawar