The Asian Human Rights Commission wishes to inform you that The Right Livelihood Foundation has announced the laureates for 2014.

For further information about the award and this year’s laureates, please visit: 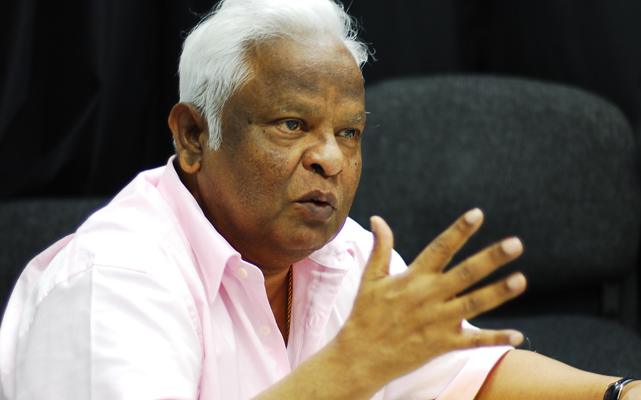 “… for his tireless and outstanding work to support and document the implementation of human rights in Asia.”

Basil Fernando is a leading Asian human rights defender. In a career spanning three decades, he has been pivotal in linking ordinary citizens striving for human rights principles at the grassroots to institutions working for structural reform at the policy level. Fernando, and the Asian Human Rights Commission (AHRC) that he led for nearly two decades, have developed one of the world’s most sophisticated “Urgent Appeals” systems. Through its Human Rights School and training initiatives, the AHRC has educated countless lawyers and activists on the principles of fair trial and the rule of law, thereby greatly advancing an Asian movement working towards the realisation of human rights for all.

Basil Fernando was born on 14 October 1944 and graduated in law from the (then) University of Ceylon in 1972. After graduation, he taught English as a second language at university level for 8 years, before becoming a practising criminal lawyer in 1980.

Fernando became concerned and began resisting the pernicious politicisation and corruption that was becoming common in the public justice system in Sri Lanka, undermining the legal profession. In 1989, when tens of thousands of people had already “disappeared”, his name was placed on a death list, forcing him to flee to Hong Kong. Fernando worked for a UNHCR sponsored project for three years as a Counsellor for Vietnamese refugees in Hong Kong.

Subsequently, between 1992-94, he worked for the Human Rights Component of the UN Transitional Authority of Cambodia and UN Human Rights Centre as a Senior Officer. These experiences helped shape the approach to human rights that Fernando adopted when he accepted Directorship of the Asian Human Rights Commission, and the associated Asian Legal Resources Centre, in 1994.

Basil Fernando was the Asian Human Rights Commission’s only full-time employee when he joined the organisation in 1994. His approach to human rights was a radical departure from most human rights work in the region at the time. He focused on assisting victims of human rights violations and activists from within the communities who were supporting the victims, rather than propagating human rights from urban centres. Moreover, he began analysing precisely why and how principles of human rights were not being incorporated in, and implemented through, national public justice systems. Also, he began engaging in lobbying and advocacy from outside the country where human rights abuses were taking place in ways that supported and protected victims and informants. To achieve this, Fernando began building up AHRC’s capacity and the capacities that would allow such work to be done in the countries in which AHRC became involved – by recruiting and training staff and empowering partner organisations.

The AHRC today works actively in 12 Asian countries: Bangladesh, Burma, Cambodia, China, Indonesia, India, Pakistan, Nepal, South Korea, Sri Lanka, Thailand, and the Philippines. Fernando stepped down from the position of Executive Director at AHRC in 2010 and today serves as its Director of Policy & Programmes.

Basil Fernando and his colleagues at the AHRC have painstakingly documented human rights violations in the countries in which they work, and published them in AHRC’s Annual Reports. Fernando and the AHRC team have produced several monumental works, which include the book Narrative of Justice in Sri Lanka told through stories of torture victims that documents 1,500 cases of police torture in Sri Lanka between 1998 and 2011, and article 2, a quarterly journal that analyses recent developments in the implementation of human rights standards in Asia. Torture – Asian And Global Perspectives and Ethics in Action are also regular publications. The AHRC, under Fernando’s guidance, has done extensive work in exposing and reducing the number of forced disappearances and in assisting victims. It has documented a number of disappearances in a “Cyberspace Graveyard”, available at www.disappearances.org

Given the absence of a governmental charter on human rights in Asia, and cognisant of the arguments against human rights on the basis of cultural relativism, the AHRC launched a series of consultations, which lasted several years, to develop consensus for a human rights charter. The Asian Human Rights Charter, a people’s charter representing the consensus of Asian civil society, which resulted, was adopted in South Korea in 1998. While subscribing to the universality of human rights, it demonstrates Asia’s particular approaches being used in framing human rights, and is available in several languages. Efforts towards drafting an Asian Charter on the rule of law are ongoing.

Initiating an Asia-wide campaign against torture and ill-treatment, as an answer to widespread use of torture in Asian countries, has become one of AHRC’s core activities. This has resulted in the formation of the Asian Alliance Against Torture and Ill-Treatment (AAATI), which also holds meetings for parliamentarians from Asian countries to encourage them to play an active part in eliminating the use of torture.

During Fernando’s leadership, the AHRC developed one of the most extensive urgent appeals programmes in the Asian region to assist persons who suffer human rights abuses. This programme is arranged so complaints can be received quickly, speedy interventions can be made at local, national, and UN levels, and the information can be disseminated to a large audience across the world. Over 350 urgent appeals from different Asian countries are received and acted upon by the AHRC annually. The appeals system has successfully led to the release of many ordinary people, saving them from suffering further human rights abuses.

The AHRC under Fernando’s watch has established a human rights school with a view to developing a new form of human rights education based on the application of human rights principles to current problems, adopting the Danish Style Folk School method of education through dialogue. The school holds live sessions in different countries in the region, and also by way of a correspondence school, disseminates lessons to local human rights organisations and also makes the same available on the Internet. The human rights school has been widely subscribed by the global human rights community, with over 200 persons accessing the modules every month.

In 1995, the AHRC also commenced a direct programme to train Chinese lawyers on the principles and proof of fair trial. This training programme has been ongoing annually, and the AHRC has managed to make a significant impact in promoting the rule of law in China, establishing partnerships with a remarkable number of lawyers, law teachers, academics, and activists.

On the basis of a large body of data gathered over many years, the AHRC has identified that archaic and extremely backward public justice systems, i.e. police, prosecution, judicial and prison institutions, are the major obstacle to the implementation of human rights in Asian countries. In order to overcome this major obstacle the AHRC has made advocacy for re-engineering of justice systems another key focus of its work.

Basil Fernando is a Senior Ashoka Fellow and a Sohmen Visitor of Law at the University of Hong Kong. He received the Gwangju Prize for Human Rights in South Korea in 2001. He is also a reputed poet and creative writer, who writes in his mother tongue Sinhala and in English.

The following is the Press Release from the Right Livelihood Award Foundation:

The 2014 Right Livelihood Honorary Award goes to EDWARD SNOWDEN (USA) “for his courage and skill in revealing the unprecedented extent of state surveillance violating basic democratic processes and constitutional rights”.

ALAN RUSBRIDGER (UK) “for building a global media organisation dedicated to responsible journalism in the public interest, undaunted by the challenges of exposing corporate and government malpractices”.

The Jury recognises ASMA JAHANGIR (Pakistan) “for defending, protecting and promoting human rights in Pakistan and more widely, often in very difficult and complex situations and at great personal risk”.

It is the first time that a Right Livelihood Award goes to Pakistan.

The Jury awards BASIL FERNANDO/ASIAN HUMAN RIGHTS COMMISSION (Hong Kong SAR/China) “for his tireless and outstanding work to support and document the implementation of human rights in Asia”.

The Jury recognises BILL McKIBBEN (USA) “for mobilising growing popular support in the USA and around the world for strong action to counter the threat of global climate change”.

The Foundation will fund legal support for Edward Snowden.

Further information and material supporting this press release can be accessed viawww.rightlivelihood.org

For high-resolution pictures and videos, please also refer to

“This year’s Right Livelihood Laureates are stemming the tide of the most dangerous global trends. With this year’s Awards, we want to send a message of urgent warning that these trends – illegal mass surveillance of ordinary citizens, the violation of human and civil rights, violent manifestations of religious fundamentalism, and the decline of the planet’s life-supporting systems – are very much upon us already. If they are allowed to continue, and reinforce each other, they have the power to undermine the basis of civilised societies.

But the Laureates also demonstrate that the choice is entirely in our hands: by courageous acts of civil disobedience in the public interest, through principled and undeterred journalism, by upholding the rule of law and documenting each violation of it, and by building social movements to resist the destruction of our natural environment, we can turn the tide and build our common future on the principles of freedom, justice, and respect for the Earth.”

ASIA: Wounds in the souls of the members of disappeared people’s families can never be cured »