(Hong Kong, June 28, 2012) The Asian Human Rights Commission wishes to inform that its new initiative, Torture: Asian and Global perspectives, was launched at an event that was jointly organized by the Asian Human Rights Commission and the Centre for Comparative and Public Law at the University of Hong Kong in the Foreign Correspondents’ Club, on Monday, 25th June 2012. 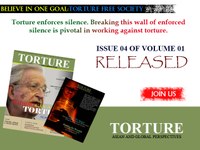 The bi-monthly magazine aims to extensively cover aspects of torture not only in Asia but other parts of the world as well. Its first issue was mainly focused on India, the largest democratic nation in the World. The issue presented how torture still exists in the country and how human rights activists and others who are committed to protecting human rights can campaign against these abuses with non-violence.

Torture’s ubiquity in Asia is such that it has become an integral part of the continent’s everyday landscape. Torture is so ‘normal’ that governments are rarely held to account for practicing it, judicial systems are often lackadaisical in dealing with it, national media ignore it, and the public is indifferent to it. This insidious normalisation of an abhorrent practice is a colossal bar to combating torture in Asia, Tisaranee Gunasekara, who is a Sri Lankan columnist based in Colombo pointed this out in her comment in the magazine.

Meanwhile in his essay, Bob Brecher, Professor of Moral Philosophy at the University of Brighton, and author of “Torture and the Ticking Bomb”, wrote an extensive analysis of torture in the present geopolitical situation. “Torture is the worst thing we do to each other. A torturous society — the sort of society increasingly legitimized since September 2001 – is the worst society we can create; Why?”

In his essay, Sheikh Showkat Hussain, a professor who teaches human rights and international law at Kashmir University, examined torture against children in Kashmir, stating that the, “Indian Constitution does not have any specific provision which explicitly provides protection against torture,” he observed.

Additionally, “It is not the duty of the citizen, nor is the citizen even able, to prevent torture or to create a genuine justice system. It is the singular responsibility of the state, which possesses the means and mandate to enforce the law” said Bijo Francies of the AHRC in an interview with the magazine.

In our second issue we focused on Sri Lanka and tried to deliver broader coverage on torture, which is part of daily life in the island nation. In this issue many scholars contributed with their specialized areas of expertise.  “The majority of torture doesn’t occur for political reasons. It more often takes place in order to conduct criminal investigations so in that process, instead of properly investigating a crime and using methods of investigations through the use of forensics and other methodologies, people are just beaten and forced to confess.” said Basil Fernando, an icon of human rights actives and a director of the AHRC said in an interview.

In our editorial we tried to understand the problem and its root causes. One question we had was, “Why is torture endemic to the country, even after passage of many laws and the acceptance of numerous conventions against torture?” The answer might appear to be a complicated one. However, we must remember that the occurrence of torture is neither accidental nor invisible to the public.

It is the result of a long and systematic process of social control, which uses old tactics of the powerful and unaccountable, without respect for past or present. Sri Lanka is unable to develop a system through which not only would torture be eliminated, but all forms of crimes would reduce, to reflect the kind of evolved civilization that we claim we are. The sad part is that these primitive practices of torture are being used as tools of social control.

Even the electoral process has become cynically manipulated by those who appear to have absolute power; i.e. a site of hollow democracy where authentic dissent has little space to make its presence felt. It is perhaps naiveté on the part of the citizens that accept this space as one through which justice can be achieved and violence reduced. This acceptance has created tremendous stress and darkness in Sri Lankan society.

Today we are in a situation where we must find a way to break down the system of absolute executives, as we have for absolute monarchs in the past, and hold every citizen as equal before the law. Unfortunately, today’s politics ignores the principles of a free and equitable society, in favor of popularity contests between special interest factions and the compromising of the rule of law. To find a way to achieve our goals is a long term process and an understanding of voluntarism is important.  “Making a path for victims to come forward and express their experiences while continuing rational discourse is crucial to any serious return to a society that respects the rule of law,” Nilantha Ilangamuwa, an editor of the magazine said. He added, “Generally, politics has more in common with culture than legality. Because of this an idea of “social change” came into discourse, where social movements originated.”

We believed that, despite of all these facts, elimination torture is a collective process which will take a long time and tremendous effort to achieve. Torture: Asian and Global perspectives, is only one point on that long road and we hope to join hands with victims of torture and opinion makers to make our presence known to policy makers. We hope people all around the world will joined us to eliminate torture and ensure that a torture free society is possible.

« BANGLADESH: Victims of custodial torture cry for justice in a public trial

SRI LANKA: The Supremacy of the national security apparatus  »