(Note: this article was first published in the August 16, 2015 issue of the Sunday Examiner)

Temogen (Cocoy) Tulawie, a rights advocate from Sulu, walked out of prison on July 20 after a court in Manila acquitted him of charges of murder and possessing explosives. 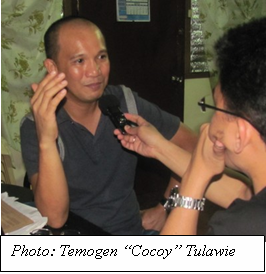 His acquittal ended nearly four years of imprisonment. But the remaining question is: Why was he charged, arrested, detained and prosecuted in the first place?

Tulawie’s acquittal from fabricated charges validates his and other human rights campaigners’ claims, including those of the Hong Kong-based Asian Human Rights Commission, that he was innocent in the first place.

However, as with innocent victims before him, prosecution on fabricated evidence comes as no surprise.

For any human rights advocate in the Philippines, suffering such ordeal is pretty much inevitable.

Tulawie was charged with masterminding and plotting the assassination of Abdusakur Tan, the former governor of Sulu, in a bomb attack on 13 May 2009. Tan and his convoy were ambushed and seven of his security escorts and four other people sustained injuries.

Since Tulawie was arrested on 13 January 2012, the Asian Human Rights Commission has consistently appealed to the Department of Justice, which is under the executive and has power over the affairs of prosecutors, to withdraw the charges against him to avoid the “accused being subjected to a trial in court over evidence that is completely fabricated.”

The Commission cited two grounds – the evidence was taken by forced confession; and to prosecute a case on evidence gained through a forced confession is a breach of the prosecutor’s duty to protect innocent persons.

The Department of Justice ignored the Commission’s appeals and proceeded to bring Tulawie and his co-accused, Abner Salahi and Juha Alihdin, to court.

In the Philippines, the power of prosecutor cannot be underestimated.

The decision to prosecute or not to prosecute is an executive privilege – which means public prosecutors are an extension of the president’s power and authority.

In fact, if the accused is not satisfied, or questions the prosecutor’s judgement, only the president can make a decision on any appeal.

This means that any person, whether they are Filipino or not, could be deprived of liberty as a result of the executive’s exercise of its power.

In Tulawie’s case, the Department of Justice, through its prosecutors, chose to exercise the power of the executive – not to protect it – by perpetuating his arbitrary detention and deprivation of liberty.

They did so because they knew full well that the evidence was fabricated in the first place.

But why do we call this arbitrary?

The United Nations Working Group on Arbitrary Detention defines the deprivation of liberty as arbitrary when the person is deprived of liberty as a result of their exercise of rights or freedoms.

This was the case with Tulawie.

To portray human rights defenders or advocates as terrorists, like Tan and the police did with Tulawie, is a common practice. The police, the military and public officials, who are critical of human rights and political activists or advocates, do this routinely.

The Asian Human Rights Commission observed this phenomenon emerging early in 2008 and the practice still thrives to this day.

In the past, human rights advocates were targeted for killing; at present, not only are they extra-judicially murdered, but they are also jailed on fabricated charges.

A question that needs to be answered is how a government, which is built on a long history of revolution and dissent, become not only intolerant of dissent and protest, but one that kills and detains those who cry for justice?

Tulawie is one of hundreds of innocent individuals who have suffered and still are suffering a similar ordeal in Philippine jails.

Even after Tulawie was cleared of the charges, the Department of Justice could not be held legally liable. Prosecutors are not accountable for their wrongdoing.

There must be a review, if not investigation, into the abuse of powers by our public prosecutors. Prosecutors put people in jail, but when they abuse their power or knowingly commit illegal acts, they themselves are not put in jail.

Holding them liable is a matter of immediate judicial urgency.