Home / News / PAKISTAN: Morality in the back burner as the LEA resorted to disappearing women and children

PAKISTAN: Morality in the back burner as the LEA resorted to disappearing women and children

Despite lacking legal framework on disappearances Pakistan’s constitution prohibits illegal and arbitrary detention and under article 10. Though the phenomenon of disappearance has been ongoing incessantly for two decade to make matters worse the LEA officials have now adopted the tactic of picking up and disappearing innocent women and children of wanted man as a mean of arm wrangling. 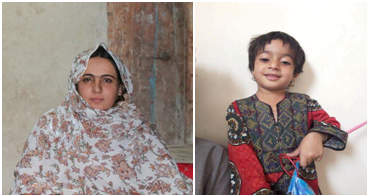 Recently the wife and 4 year old daughter of Dr. Allah Nazar Baloch- the Chairman of the Baloch Students Organization and the chief of the Balouch Liberation Front, were picked up by the agency to pressurize him to surrender.

Upon immense pressure from commune of nation as well as civil society, the state had to buckle and release Fazila along with her daughter and other women.

Ms Fazila wife of Dr Allah Nazar was abducted along with three other women and their children. Bibi Salma and her one and a half year old son Irfan, Ayal Amin and her 2 year old daughter Zehrug and Ragwar Jan were picked up by the officials of intelligence agency ISI.

Fazila who was injured due to the military operation in her area was visiting Quetta for her medical treatment along with the women. Fazila was suffering from a fractured back bone and was under severe depression which was diagnosed as Post Traumatic Stress Disorder (PTSD).

The Baloch women have taken up a more pro active role in the protest against the Enforced disappearances of their father, brothers, husband and sons. Resultantly the LEA agencies have now started disappearing the women and their children to silence protest against the barbarity. Though Ms Fazila was released many other Baloch women are not as fortunate as their whereabouts remain unknown despite a lapse of several years.

The ethnic cleansing of Baloch has solicited no response from the state, as thousands of innocent man, women and children bite the dust. The Baloch separatist movement has been outlawed and the state coming down hard on all separatist and their family sparing neither the old nor the feeble the all out war against the indigenous people is to drive them out of their ancestral land and pave way for the multimillion dollar mammoth- the CPEC.

The 62 billion dollar white elephant that is imposed on the people of Pakistan was termed a political gimmick by the former federal secretary and analyst Fazalullah Qureshi. And rightly so! Though the project is touted as the greatest gift to the people of Pakistan, the gift is shrouded in mystery and opaqueness and eyed with suspicion by many.

The indigenous people of southern Pakistan i.e. Balochistan and Sindh are fighting for the preservation of their cultural and traditional identities. The state instead of fulfilling its constitutional obligation of protecting the distinct identities of ethnic minority has gone all out to subdue and eradicate the entire population for the sake of CPEC.

Earlier it was only the Baloch nationalist that were picked up on suspicion as their dead bodies turned up in hordes while the collective conscious of Pakistani judiciary and society remained in hibernation mode.

Fast forward to year 2016 the menace of disappearances has morphed into a monster engulfing all dissenters from all four provinces. Given draconian laws such as PECA, PPO among plethora of others the agencies have been fortified legally and given blanket cover to deal with the citizen as they deem fit.

The civil leadership has been weakened so much so that even the interior minister dare not defy Rangers officials. Despite a lapse of 70 years half of those under military dictatorship the curse of deep state has not been broken by civil leadership boasting of popular mandate.

To date Pakistan has been evading international pressure to ratify convention on enforced disappearances such as international Convention for the Protection of All Persons from Enforced Disappearance (ICPPED). Draft legislation has been lying pending in the national assembly for the past two years as the contravention to article 10 and 10 A of the constitution of Pakistan continues with no respite or end in sight.

Earlier those at risk of being disappeared had a clear profile – Baloch, nationalist and political activists. However at present any one who dares speaks his mind even on social media is at risk of making it to the ever expanding, long list of disappeared.

Since the beginning of the year the state has its guns pointed at the bloggers. Since January 2017 Samar Abbas a shia blogger has been disappeared. Samar’s 92 year old father has been going from pillar to post to seek recovery of his son. The frail father has courted his arrest is protest since 7 October and has vowed to continue till the recovery of his son. Samar’s only crime was that he dared to speak against the religious extremists who declare members of other sect infidels.

The practice of enforced disappearances, which results in the custodial torture and extra judicial killings, has become a norm in Pakistan and hardly elicits any response from any state functionary who are fearful of the powerful security establishment. The military and other law enforcement agencies indulge in the practice with complete impunity. It is ironic and a failure of the government that until today, not a single perpetrator of the crime of enforced disappearances has been made accountable due to the absence of a law. The role of the Judiciary is also dismal as it has stopped taking cognizance of the cases of disappearances.

Even those fortunate enough to make it alive from the custody are left scarred for life. They are threatened with dire consequences if they dared reveal the name of their captors. Physical and emotional turmoil that they are made to go through causes long lasting effects on the missing person for several years subsequently. Even After their release they are not able to speak or express themselves even to their loved ones.

The statistics about the disappeared persons are not available however; the civil society groups working on the disappearances gathered the information from the family members of disappeared persons claim thousands of persons are missing after the war on terrorism started. The Voice of Baloch Missing Persons (VBMP) claims that in Balochistan province during the past 15 years more than 16000 persons are missing since the military government started operation, which still continues.

A recent trend in disappearances is that involving minors. The AHRC has reported and documented two cases of enforced disappearances of minors in 2017. According to the list of missing persons, prepared by Voice of Baloch Missing Persons (VBMP), among those documented as missing 170 were children and women. In one instance, a schoolteacher, the mother of a one-year-old son, was picked up.

The international community must condemns the state inaction against the perpetrators of disapprences of innocent women and children and urge the authorities to take stern action against those involved in the disappearances. it is incumbent upon the state to ensure immediate and safe recovery of all the disappeared persons. The right to fair trial must be respected for all individual unequivocally and equitably. The principal of rule of law must be upheld if the state wants to hold its head up high in the commune of nations.

« INDIA: Do Not Endanger The Life Of Chandrashekhar Ravan, Revoke NSA and release him NOW