Wolfgang Kaleck is a German civil rights attorney and the General Secretary for the European Centre for Constitutional and Human Rights. Against huge odds he has sought prosecution charges against a number of US officials and personnel in connected with the alleged human rights abuses at Abu Ghraib and Guantanamo Bay. He has lectured extensively throughout the world and is US whistleblower Edward Snowden’s legal support in Europe.

John Clancey, Chairperson of the Asian Human Rights Commission and Asian Legal Resource Centre, caught up with Kaleck  for the Torture: Asian and Global Perspectives (Torture magazine) in Stockholm, Sweden. 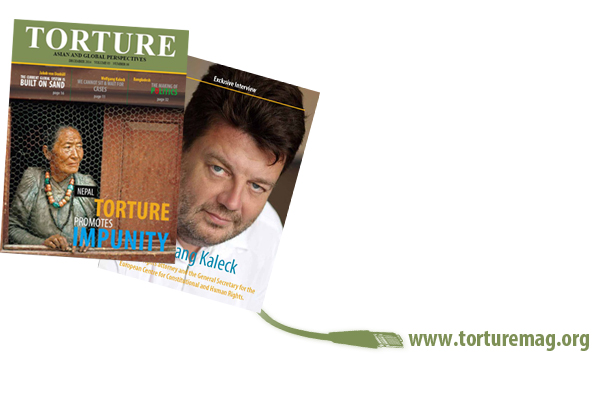 John Clancey ( JC) : Your organisation has an impressive history and does not shy away from the most contentious issues. How did this come about?

Wolfgang Kaleck ( WK): The European Centre for Constitutional and Human Rights (ECHR) was founded in 2008 and is based in Berlin. Basically we followed the line of the Pinochet precedent of October 1998 — largely seen as the first time that legal human rights work conducted by NGOs showed its strength on a transnational level. So now when domestic venues are exhausted or are blocked, mainly for political reasons, we have an additional ability to act on a transnational level with regional human rights courts, like the European Court of Human Rights, or through universal jurisdiction.

WK: Yes, we fired a number of complaints against those who bear most responsibility for the US torture system after 9/11, for example against Donald Rumsfeld, the former Secretary of Defence. Though Rumsfeld did not go on trial there has been this great side effect in that people like former President George W. Bush, former Secretary of Defense Rumsfeld almost 500 CIA agents do not travel any more to Western Europe because they fear getting prosecuted for war crimes, for their involvement in extraordinary renditions.

So we still think that international criminal law against the torturers can fulfil its role and can have an impact. Our latest success was the filing of a complaint against high British politicians for the little Abu Grahib, as in the systematic torture and abuse carried out in Iraq by British forces after the occupation of Iraq 2003. We were very happy that the ICC did reopen the preliminary examination due to our complaint.

That is one line of our work – accountability for war criminals and torturers. And another where we are maybe different from other organisations is that we want to challenge double standards so we also go into cases where Western actors are involved and we specifically try to research Western complicit cases.

JC: Besides your work challenging Western complicity in abuses what else do you focus on?

WK: Corporate actors who are involved in crime. My first case was for German disappeared persons during the dictatorship so I represented the German mothers of Plaza de Mayo and the other thing was that we looked into the complicity of companies and came up with cases of disappeared trade unionists at the Mercy de Spence plant in the province of Buenos Aires in Argentina. The political aim of the military dictatorship was to destroy very strong workers and trade unions and to establish a new neoliberal political and economic model. So it is not only an abstract human rights violation what happened in Argentina or what happened in Chile, it was the brutal and repressive enforcement of a new model of societies – neoliberal models of societies – so these kind of legal cases are important to establish alternative narratives about what happened.

But that was only the start, we also looked into companies who are in someway involved in these kind of massive atrocities which is important because the attitude of Western countries is still to point to the global south who kill each other but not analyse their own role maintaining a completely unjust world economic system which leads to hunger and deprivation of many fundamental rights. We think it is also important to problematise the role of other actors, that is mainly companies. There is now a political window since the proposal of the Ruggie Principles on Business and Human Rights in 2011. This initiated an important worldwide discussion on corporate social responsibility but it is not enough to encourage the voluntary involvement of corporate actors, we need strong regulations to define red lines, where they are crossed and accountability mechanisms in international criminal law and compensation law. As a small organisation we are trying to work for this.

JC: What legal vehicles are open to you in terms of bringing a case against a company when it goes beyond your red line?

WK: We are not focused on one specific legal tool like universal jurisdiction. That was kind of the past. We have to sit together with local groups, regional groups, and discuss what kind of legal tool can bring added value to the specific political and social struggles. Sometimes cases are domestic, but sometimes there is an overlap between domestic and transnational law: we are always looking to lead to some kind of accountability. We can use competition law for example, in cases of the textile industry in Bangladesh. We say that the false advertisement by companies claiming to guarantee fair working conditions is a violation of competition law, because they do not. So it is about the strategic cooperation between transnational organisations; like ours and domestic organisations. It is about bringing progress to a movement as well as the situation on the ground.

JC: How do cases come to your attention? Is it through NGOs or your network in Europe?

WK: At the beginning our network was very centred on Europe and the Americas. But now we are working closely with organisations from the Philippines, from India, Pakistan, Bangladesh and even some African countries. We organise proactive discussions and regional workshops on how to build cases and how to use them. It is important to create an understanding of under what circumstances it makes sense to bring a legal case, because it is not always appropriate. When legal interventions make sense they enable you to enlighten, to scandalise and to empower local communities to strengthen themselves.

We cannot sit and wait for cases. We are very small with few resources so we think everything out fully. Yet we can react much faster than governments and corporations, so we always look for the optimal place, moment and tool. We want a continuous conversation because the problems we are facing are global problems. 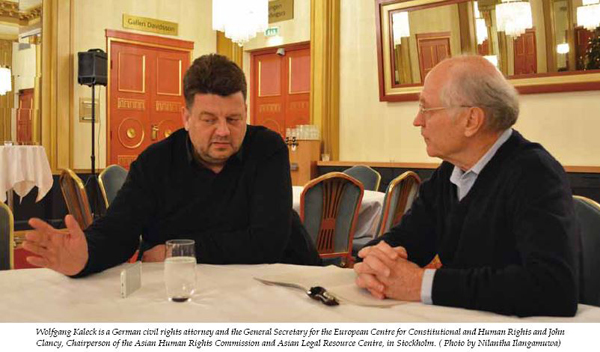 JC: How do you find working with local courts?

WK: Difficult. There is this attempt to outsource responsibility and a lack of accountability. They are not very open to considering what is happening in other countries. For example a German local court will not want to take a case about crimes in Pakistan by German companies. We are trying to construct legal bridges to connect these crimes in Pakistan to actors in Germany. We think it is necessary to hold the headquarters accountable and one legal tool to do that is due diligence. It is difficult to prove that they are actively involved in crimes but if we say if they profit from doing business then they have the obligation to guarantee their business is not harmful. So if you get the notice that it is a dangerous environment you have the obligation to protect your workers and if you don’t we can hold you accountable in a Swiss court. That is a n example from a recent series of cases we started.

JC: So even though you have a separate legal entity in another country the repatriation of profits from that country to a home country should imply accountability.

WK: It is about control. Lifting the corporate veil. We are testing this and even if we are not successful in our court cases it fires up the debate because people in Germany now get that there is a certain responsibility of German textile buyers for companies in Bangladesh or Pakistan. That was not true 5 years ago. I think this is important grounding work.

WK: I think that the solution is maybe not coming from Europe. Maybe it is coming from Latin America or Africa or Asia. Because many more people are realising that they have a right to rights. There are many more high skilled lawyers in India than in Germany. Yet still those in Germany have to play a certain role. It is about international solidarity, or you might call it globalisation from below. First of all it is about exchanging experiences and knowledge and a transfer of resources and that has to be organised.

But I think that is on the way and that even Western human rights organisations who initially only worked on political and civil rights are getting it. So even the big ones like Amnesty International or Human Rights Watch are more and more alarmed about economic and social rights. So we, the smaller organisations and those who are connected have to play this role to inform our Western European societies.

JC: How does the younger generation of lawyers fit into all of this?

WK: There is actually much going on in the younger generation of lawyers because many of the young lawyers are studying in countries other than their own and learning several languages. They see a future field of work in human rights. That is new and for me it is a source of hope. We often hear from older lawyers that the young are not political enough and lack long term political vision. Yet they do want to challenge human rights violations! We should construct transnational and transgenerational networks where we organise the transfer of experience and knowledge.

Similarly with academics and scholars there are many more universities and academics interested in transnational criminal law and transnational human rights law than 15 years ago. They are willing to support the work of organisations such as ours. This is a big field and we have a lot to work on.

Click here to read the latest issue of the magazine.

Torture: Asian and Global Perspectives is a bi-monthly magazine which focuses on torture and its related issues globally. Writers interested in having their research on this subject published may submit their articles to torturemag@ahrc.asia

About AHRC:The Asian Human Rights Commission is a regional non-governmental organisation that monitors human rights in Asia, documents violations and advocates for justice and institutional reform to ensure the protection and promotion of these rights. The Hong Kong-based group was founded in 1984.