Home / News / WORLD: Picked up, killed and dumped in Balochistan

WORLD: Picked up, killed and dumped in Balochistan 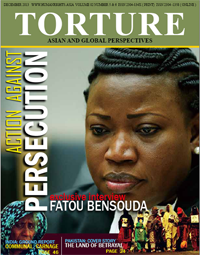 The following article appeared as the editorial of the latest issue of ‘Torture: Asian and Global Perspectives’, a bi-monthly magazine published by the Asian Human Rights Commission (AHRC), based in Hong Kong and the Danish Institute Against Torture (DIGNITY) based in Denmark.

The long march has clocked a hundred days. The brave marchers have walked continuously from the place of their birth to the places where they have hoped to effect change. They have been searching for their loved ones, who were picked up, by security forces in uniform and armed intelligence agents in civilian clothes. ‘Responsible’ guardians, deployed in the area to control the ‘resistance’ have shown themselves to be devils in disguise. The bodies of some of the disappeared have been found dumped, their lives taken after horrendous and inhuman torture. But others are still hanging on to the iron bars of their cells somewhere, being interrogated by captors protected by draconian laws and impunity. That the military have the power to manipulate personal liberties while cocking a snook at justice and freedom in Balochistan is a fact.

The people of Balochistan have decided to walk thousands of miles on foot to seek justice, ignoring the tremendous disruption to their lives and the threats and attempts by security forces and other politically motivated groups to sap their resolve. The organisers have called this attempt the Long March.

This is how they have named this unbelievable, energetic, and heartwarming attempt to pressure a society that has crossed the line in the name of ‘the war on terror’. The Long March is the symbol of activism. It hails the strength of unity while giving energy to those who fight for a genuine cause. Activism is based on awareness. One’s role as an activist relies on the strength to make others aware of the cause that one is engaged in. The innocent people of Balochistan, by walking thousands of miles, day in and day out, are facing that challenge and in doing so have received the adoration and blessings of the people in other regions of Pakistan. As well placed activists have said, this is more than what Gandhism did in the colonial Bharat.

Our cover story features a detailed account on Balochistan. It is a province where justice has been buried, where thousands of civilians and those who fought against authoritarianism and militarism have been tricked, betrayed, and eliminated. The Inter Service Intelligence (ISI), one of most horrific, strategic, well-managed, and dangerous state intelligence agencies in the world is the prime accused in most of the crimes reported in the area. And, a corrupt government has approved its actions in the name of counter-insurgency. The government of Pakistan is yet to understand that the insurgency is not the disease but the symptoms of the disease. If the government really needs to cure the crisis in the area, then it must engage in genuine treatment procedure rather than engage in ad hoc solutions that go under the motto: picked up, killed, and dumped. Kidnapping the target and dumping his or her bullet riddled and tortured corpse in a public place to scare the people in the area is a military strategy which aims to provide a lesson to those who still retain seeds of resistance. If this is the only solution that the government is capable of then it will have to commit genocide against the people of Balochistan so that it can continue to steal their natural resources and have total control of the province.

However, the government of Pakistan is still stage-managing the crisis and the international community has very limited access to the area. On one hand Pakistan is the gateway to the Middle East, on the other hand the deep rooted internal crisis and cultural diversity has given a chance for the power brokers to cynically manipulate the country. The games have been played since well before the origins of Pakistan in October 1947, in the name of the Partition of India, where thousands of people starved to death and millions perished. Though there is the recorded history which says communal and religious disputes had been ongoing for hundreds of years in the area, the border between two countries was determined by a colonial government-commissioned report prepared under the chairmanship of, Sir Cyril Radcliffe who was then a barrister in London. It resulted in around 20 million refugees, according to reported statistics.

It is well documented that Gandhi finally agreed to appoint Jinnah as the Prime Minister of India if he could annul the plan of separatism. But the time and climate led Jinnah’s Muslim league to take advantage, like other politicians who have run with and manipulated the emotions of the public. He denied the gift and proceeded with his political mission that ultimately created the state of Pakistan. Since the day the country was delivered from the womb of religious based separatism, it has been an area of conflict, an area of mass killings, of fundamentalism and communal carnage, and is now the gateway to a black hole of terrorism and counter-terrorism heavily funded by various allied western interests.

In the case of Balochistan the people have believed that they have had sovereignty over the land despite the creation of Pakistan. This history of Balochistan goes as far back as when the Nadir Shah Afshar came to power in 1736 in Iran and his military intervention in Afghanistan and Balochistan from 1738 to 1740, after defeating the Mughal Empire in India. However, Balochis soon experienced the bitterness of hypocrisy and betrayal. The story of about Mir Ehltaz Khan, who was later killed by his younger brother Mir Naseer Khan is one of numerous examples. However, the true history in Balochistan is still debatable, especially the conflict between Qandhar (a.k.a Kandahar) and Kalat that has led us to understand the historical bond between Afghanistan and Balochistan.

What unified the Balochis in their quest to regain self-determination, which resulted in the ‘existing state’? On the one hand, authoritarianism, militarization, and conquest has robbed them of their history and put them into the do or die situation. On the other hand, natural resources which would allow the citizens at large to achieve a respectable existence have been controlled by the military or political elites, well connected to feudal political elites in Pakistan.

There is very little responsible political understanding at the heart of government in Pakistan. It is no exaggeration to say that Balochistan is a place where the death of thousands is imminent. Social destruction and poverty has constantly increased due to great ignorance shown by the central government and its corrupted political agents. In this sense, to some extent, this can be compared to the Papuan struggle for freedom from Indonesia. However, the crisis cannot be overcome without an understanding about the ground realities in the area. The crisis in Balochistan and its cry for freedom prevails in the unique dynamic socio-economic paradigm in that geopolitical arena. The challenge is becoming ever more so for the Baloch people.

It has been reported by the independent media, as in the past, that hundreds of Baloch people, including students have been kidnapped and extrajudicially killed by state intelligence agencies. According to well-placed sources in the area, over 510 people have recently been picked up by intelligence agencies from different areas of the province and 161 of them extrajudicially killed. Most of them were tortured to death. At least one man is kidnapped by the security forces in Balochistan every day.

However, the government of Pakistan denies the facts and continues its cannibalistic policy against the province, undermining the basic rights of its people. Under these circumstances, there is no possibility of a long term solution. Conflict-resolution and reconciliation can play the genuine role only when each party has come to a mutual understanding while respecting each other. Only this can eradicate the idea of revenge or political vendetta. The people engaged in finding a peaceful solution or in other words a win-win solution, need to consider the long term process rather than aim at short term achievements.

The most important factor is the establishment and proper implementation of an efficient and impartial criminal justice system, something virtually absent at present. It has been widely reported by the media that even during the Long March, which is a peaceful and historic protest, some of the relatives of the activists have been picked up by security forces and threatened. It is nothing less than shameful that the government of Pakistan has directly ordered such acts while claiming to be interested in engaging in the peace process in the province.

No one needs an expanded explanation to understand the situation, when the fact is that the Balochis do not have access to their natural resources. Imagine living in an area where natural drinking water is controlled by militant gangs or military regiments, who take that water and supply it to another area. As far as natural resources are concerned, the case in Balochistan is just so. In this light, there no need to discuss health, education and other responsibilities of the government. Under such circumstances of expropriation, social anxiety, frustration, and psychological trauma develop. Eventually the people who suffer will look for alternatives and history shows us that this is how most arm struggles begin. The Baloch people have also taken up arms based on this core reason. They do not find justice in the legal framework and are denied legitimacy in the cultural and economic context. That is the result of social denial and the spreading of social fear. It is time for the Pakistani government to understand these causes and look for the solution. Too much blood has been and continues to be shed.

History has passed, the future is yet to come, but the present is where we have to live. The importance of the Long March is in the march itself, which is addressing the present situation and a hope towards a peaceful solution. Thousands of innocents who are in the custody of the Pakistan military are facing the same needs of the hour. We as human beings need freedom, and justice, and a true cause to engage in to make life meaningful. This basic and comprehensive dream cannot be allowed to be shattered under any circumstances; if it starts shattering then the resistance will arise. The elimination of torture and other practiced cruelty needs to be effected for there to be freedom and justice. It will guide us in our search for a secure place to enjoy personal liberties. The reflection that the Long march has left in its wake is on these basic needs of humanity. 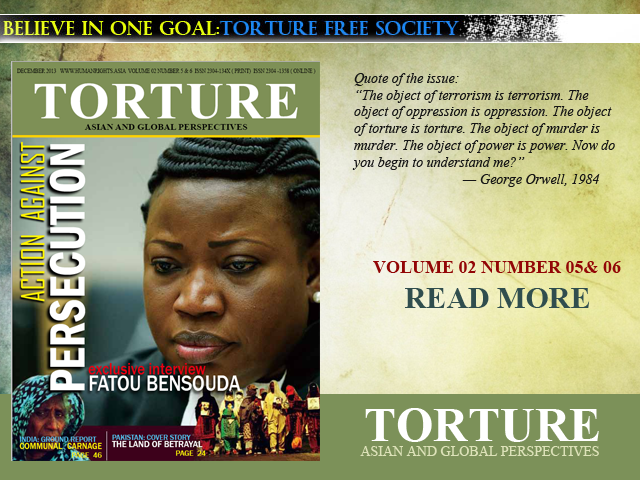 « SRI LANKA: Human rights defenders Ruki Fernando, Rev Fr.Praveen Mahesan arrested in Kilinochchi and detained in Vavuniya to be brought to Colombo for further interrogation under PTA by TID Police