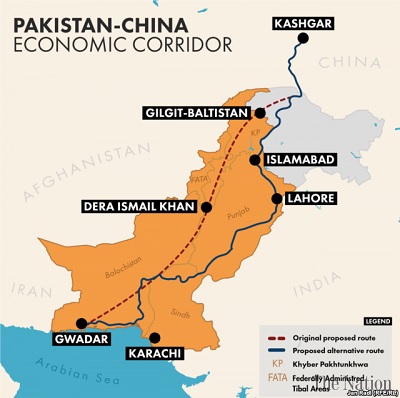 There are numerous dimensions to CPEC, economic, geo-political and geo-strategic, environmental, sustainability, human rights, and regional and global security and peace. However, I will focus on its implication for the Sindhi people and why we oppose it.

According to information available in the public domain, China Pakistan Economic Corridor (CPEC) comprises thousands of kilometers  of roads, railway networks, tunnels, deep sea developments, terminals, pipelines and industrial zones. CPEC  started out with a budget of $46 billion but has increased to $54 billion in the last four months. An increase of about $2 billion per month! Is that all? The answer is we do not know. For example, when questions are asked in the Pakistani Senate about further details of CPEC, the answer comes back that they are confidential.  Details of the project covering dimensions, implications and proportions is shrouded in secrecy. It is like some sort of war exercise rather a development project. There is a complete lack of transparency. Strangely enough, many developments are being carried out without much publicity or secrecy. It is not part of anything else but the CPEC design of rapid port expansion and construction of additional terminals at Karachi, increasing capacity in terms of number and size of ships.

The matters to be noted in terms of Sindh in the context of CPEC include:

Other related issues include:

Let me provide you with a brief historical overview of our experience of development in Sindh. Officially, Sindh produces more than 70% of the wealth in Pakistan. Sindh produces 72% of the gas and 55% of the oil. Sindh has the 6th largest coal deposits in the world that constitutes over 95% of the coal in Pakistan. It is currently the only operational seaport, generating almost twice more electricity and 50% more grains and cotton than is required. More than 70% of government taxes are collected from Sindh. And what does Sindh get in return?

In brief, due to systematic exclusion of Sindhis from development, plans for converting Sindhis into a minority plus ruthless exploitation of their resources has wrought havoc on the Sindhi people. Instead of improvement, all indicators for social development have gradually and systematically deteriorated during the past 70 years of Pakistani history.

With this backdrop, the Sindhi nation believes that CPEC will bring further misery and destruction rather any real social development. The following consequences are anticipated.

Sindhi people have not been consulted in the CPEC process at all. Sindhis believe it is a project that will further ruthlessly exploit their people’s resources. It will marginalise them, destroy them, push them further into poverty, disease, disempowerment and possibly into a minority status. The international community already understands that this is not only an economic corridor. CPEC is a tool for geo-strategic control which will destabilise regional and global security for decades. If they want to stop this havoc from happening, they need to help Sindhis and other oppressed peoples in Pakistan to face the onslaught and fight back.

ABOUT THE WRITER; Mr. Lakhumal Lohano, is a lawyer based in the UK and the general secretary of Sindhi Baloch Forum. He is a regular writer for a variety of magazines. He can be reached at; lakhuluhana@yahoo.co.uk