A Statement from Unrepresented Nations and Peoples Organization (UNPO). forwarded by the Asian Human Rights Commission

On 14 March 2017, the Unrepresented Nations and Peoples Organization (UNPO) joined forces with the Asian Legal Resource Centre, the Right Livelihood Award Foundation and the World Sindhi Congress in a side-event to the 34th Regular Session of the UN Human Rights Council, at the Palais des Nations, in Geneva. The event brought together representatives from Pakistan’s oppressed regions and occupied territories and experts on the topic, with the aim of raising awareness for the deteriorating human rights situation in Pakistan, including a special focus on the disastrous impact of the implementation of the China-Pakistan Economic Corridor (CPEC) on Pakistan’s ethnic minorities.

Moderated by Mr Baseer Naweed of the Asian Legal Resource Centre, the event brought together speakers including the Unrepresented Nations and Peoples Organization (UNPO) and representatives of the Sindhi and Baloch communities, as well as of Pakistan-occupied Kashmir. Ms Nicoletta Enria delivered a statement on behalf of Mr Marino Busdachin, General Secretary of UNPO, shedding a light on how Pakistan’s vaguely worded definition of “terrorism” enshrined in its Anti-Terrorism laws gives the military the authority to persecute and arbitrarily arrest and kill minorities in Sindh, Balochistan, Pakistan-occupied Kashmir and Gilgit-Baltistan. UNPO reinstated its support for its members in Gilgit-Baltistan, Balochistan and Sindh in their struggle for the respect of their human rights and of their identities and languages.

Moreover, Dr Rubina Greenwood of the World Sindhi Congress stressed how approximately 70% of Sindhi people are living in poverty, and how this points to the systemic and institutionalised marginalisation of the indigenous peoples of Sindh in their own ancestral land. This was then complemented by her colleague Mr Lakhumal Luhana’s powerful speech on the devastating repercussions of CPEC on the indigenous peoples of Sindh. He went on to urge the international community to stand up with the ethnic minorities that are suffering at the hands of the Pakistani authorities, underlining how activists on the ground and diaspora organisations cannot fight this fight alone and urgently need support. 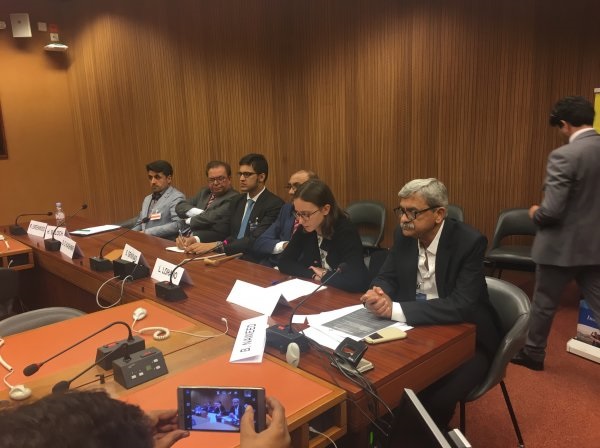 The event concluded with a declaration calling on the international community to put pressure on Pakistan to ratify all international human rights treaties and to ensure justice and rule of law. It also called for the unconditional release of all political prisoners, from respective regions. After the event, representatives and supporters of Sindh, Balochistan,Gilgit-Baltistan, PoK, also joined by a representative of East Turkestan – Mr Dolkun Isa, General Secretary of the World Uyghur Congress – gathered at Place des Nations in front of the UN to demonstrate against the gross human rights violations perpetrated in the respective regions, focusing on Pakistan’s and China’s bloody campaigns to impose CPEC without the consent of the indigenous populations directly affected by it.