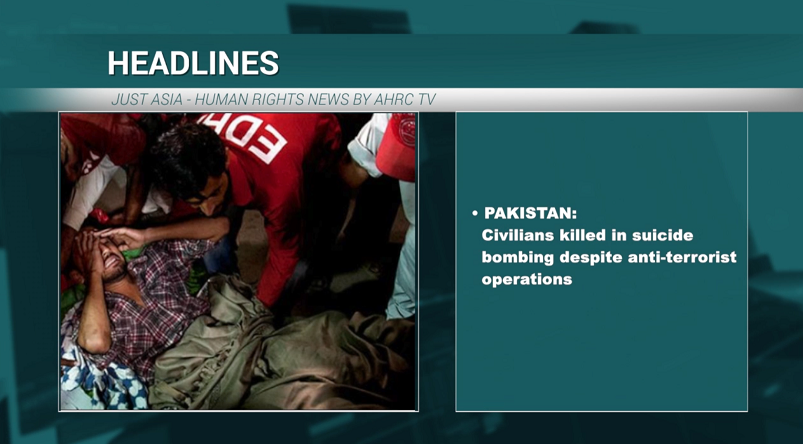 This week Just Asia begins with Pakistan, where terrorist attacks continue despite the Pakistan army’s various anti-terror operations. In the latest attack, a suicide bomber blew himself up at the crowded courtyard of Sufi Saint Shah Noorani’s shrine on November 12, killing some 60 persons and injuring 156. The Shah Noorani shrine in Balochistan’s Hub district attracts a lot of people at this time of the year from all over Pakistan. The terrorist Islamic State has claimed responsibility for the attack, as well as two other attacks in Balochistan’s capital city of Quetta.

In Nepal, police officers from Mahottari district tortured an individual for several hours on November 8, resulting in severe bleeding from his anus. Although the victim, Mr. Ganga Mahato, has been treated in hospitals for several days, his bleeding is not stopping, posing a grave risk to his life. He is now being asked to seek treatment at another hospital in India.

Next, in Thailand, 20 red shirts have been indicted by a military prosecutor in the northeastern Udon Thani province, for violating the junta’s ban on political gatherings. They were indicted after participating in a red-shirt referendum watch campaign on 19 June 2016. However, Thai Lawyers for Human Rights reported that the event was cancelled before it even began due to the presence of soldiers, and so the villagers did not really participate in the event. The preliminary hearing will be held on 9 January 2017.

Moving to Indonesia, where current President Joko Widodo campaigned on the protection of human rights and resolving past rights abuses, two years under his administration has shown no progress in improving human rights protection or the rule of law. Local activist Chris Biantoro reflects on the situation of human rights in the country, with high rates of police torture, land grabbing and a total lack of protection for minority rights.

PAKISTAN: Stop madness at LoC that crippling life on both sides »