Home / News / AHRC TV: Protests in Hong Kong over sentencing of democracy activists and other stories in JUST ASIA, Episode 185

AHRC TV: Protests in Hong Kong over sentencing of democracy activists and other stories in JUST ASIA, Episode 185 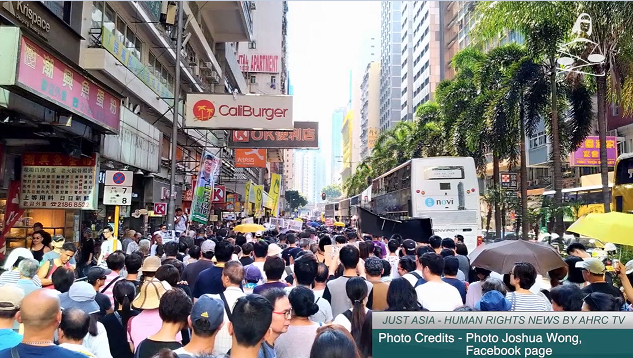 This week Just Asia begins with Hong Kong, where there is much protest and outrage against the jailing of three democracy activists for their role in the 2014 Umbrella Movement. Hong Kong’s High Court sentenced Joshua Wong, Nathan Law and Alex Chow to six-eight months imprisonment for the non-violent protest related crime of unlawful assembly last Thursday.

Thousands of supporters took to the streets on Sunday to protest the sentences, which are seen as ‘Political Persecution’, and a way to deter others from calling for democracy.

Next, Philippines President Rodrigo Duterte has called for police to shoot rights activists who get in the way of his bloody drug war. Duterte told officers that if human rights activists ‘are obstructing justice, shoot them’. He also threatened to investigate human rights defenders for criticizing him. Just Asia speaks to Basil Fernando, Director of Policy and Development at the AHRC, for his views.

India’s Supreme Court ruled on Tuesday that the practice of triple talaq is illegal and violates women’s fundamental rights. A multi-faith bench considered the matter, and finally decided that it is illegal for Muslim men to divorce their wives by simply repeating the word ‘talaq’, which means divorce, three times. There is no mention in the Quran of the ‘triple talaq’ practice, which is outlawed in 22 Islamic countries, including Pakistan and Bangladesh.

Police in the Philippines killed at least 25 more drug suspects from late Thursday to early Friday last week across Manila. In the bloodiest week of President Duterte’s drug war, the total number killed was 85. These latest killings have sparked outrage, even among Mr. Duterte’s allies in Congress, as one of the victims was a 17-year-old boy, Kian Loyd de los Santos. While police insisted he shot at them, footage from a security camera, which was confirmed by eyewitnesses, showed him being dragged along a street. He was beaten, then forced to take a gun and told to run.

Moving to Indonesia, the country’s Supreme Court has refused an appeal submitted by Mrs. Suciwati, the widow of prominent activist Munir, about access to the fact finding report regarding his assassination. Munir Said Thalib was poisoned to death by Intelligence Officer Mr. Pollycarpus Budihari Priyanto. However, the masterminds behind the poisoning remain unknown.

« SRI LANKA: Lawyers, prosecutors and judges should face the mirror