AHRC TV: Involvement of Indonesian officials in drug trade and other stories in JUST ASIA Episode 133

This week Just Asia begins with Indonesia, where the debate on the death sentence is heating up after executed Freddy Budiman’s message shocked the country. Before his July 29 execution, the drug kingpin broadcasted a message that he had cooperation from the police and the National Narcotic Board for smuggling drugs to Indonesia. Calls are being made for Freddy’s story to be investigated, as well as for the government to review its death penalty policy. For further details, Just Asia speaks to Ricky Gunawan, lawyer for one convicted death row inmate. 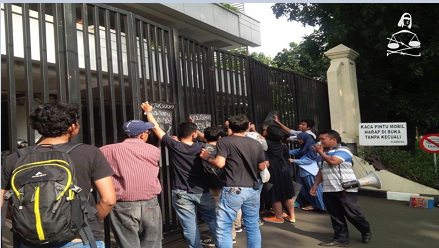 Next, India saw the gang rape of a mother and daughter in Uttar Pradesh. On July 29, late at night, a family was on their way from Noida to Shahjahanpur when their car was waylaid by a notorious gang on the national highway. Although the family kept calling the police on 100, their calls remained unanswered and the police finally arrived at the crime scene only at 5 a.m. Another case of rape and police inaction emerged on August 3, when a 22-year-old woman surfaced 10 years after disappearing. The woman has alleged that she was kidnapped and raped over the 10 years.

Next, various Thai universities are complying with the junta’s censorship measure by prohibiting their students and lecturers from discussing the junta-sponsored draft charter and the August referendum. Ubon Ratchani University and Chiang Mai University cancelled talks on the Constitution, while students at Khon Kaen University were urged to cancel their public discussion. To learn more, Just Asia interviews Jatuphat Boonpataraksa, a student activist from Khon Kaen University.

China is continuing its trials of detained human rights activists. Activist Zhai Yamin was given a suspended three-year sentence after he reportedly confessed to colluding to subvert the state. Prominent lawyer Wang Yu appeared in a videotaped interview on Monday, denouncing the head of Fengrui law firm, and blaming “foreign forces” for the firm’s activities.

In Nepal, the Asian Human Rights Commission, in partnership with the REDEF Nepal, organized a regional workshop with police officers on the Caste Discrimination Act 2011. The two days’ workshop was well attended by police officers from 11 districts of the eastern region, as well as civil society members, Dalit advocates, and media personnel.

Moving to Pakistan, the country has gone from a non-executing state to an executing state in the last 19 months. At present, every month 22 persons are hanged. Starting from December 2014, when the moratorium on hanging was lifted, 413 persons have so far been executed. Only a few of these were terrorists.

« INDONESIA: Death penalty and criminal defamation is not a solution, Mr. President

NEPAL: Playing political musical-chairs for the peace of the graveyard prolongs transition »