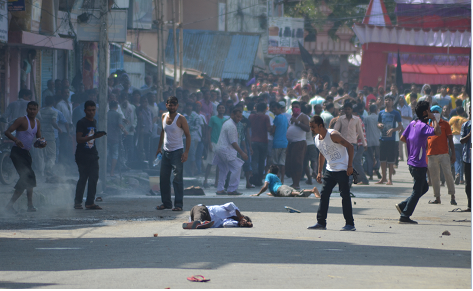 Just Asia begins this week with a ground breaking report on Nepal’s anti-Constitution protests, in which over 40 persons died. Published jointly by the Asian Human Rights Commission and the Terai Human Rights Defenders Alliance, the report concludes that security forces consistently engaged in excessive use of force against protestors and bystanders from August 2015 to February 2016. Just Asia caught up with freelance writer and political analyst Tula Narayan Shah to learn his views on the report.

In Indonesia, there is a controversial proposal to nominate former dictator Soeharto as a national hero by the Golkar Party, which supported Soeharto’s regime for 32 years. Soeharto was allegedly involved in various human rights abuses and military operations. None of these cases have been investigated or addressed by successive governments. To learn more Just Asia interviews AHRC’s Programme Officer Chris Biantoro.

Pakistan’s transgender community faces terrible discrimination and a lack of protection. On Sunday, transgender rights defender and President of TransAction Alliance Peshawar, Alesha was shot eight times by a group after she refused to make pornographic movies for them. She died in a hospital on Wednesday, after she was refused a bed in both the female and male wards, and the medical staff were more interested in her rates for dancing rather than providing medical treatment. There are an estimated 500,000 ‘third-gender’ citizens in Pakistan, all of whom have no rights.

Meanwhile, enforced disappearances have become a major human rights reality in Bangladesh. Since 2009, more than 300 people have disappeared, largely by the Bangladesh Police and the Rapid Action Battalion. Families of the disappeared are usually denied any remedies, leaving them to endlessly wait for their loved ones.

« INDONESIA: President must fulfill promise to solve the Paniai case, and investigating team must commence work