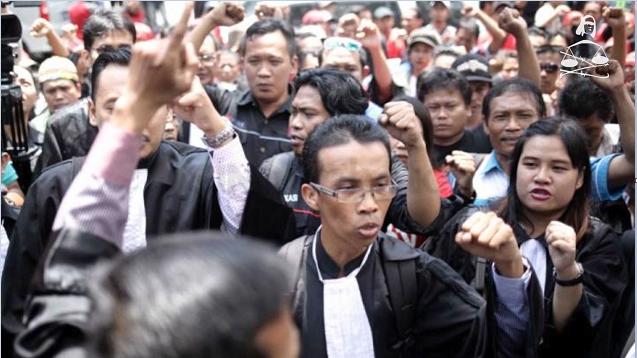 This week, Just Asia continues its report on the prosecution of Indonesian activists for crimes against public authorities. Hundreds of labor activists have been demonstrating peacefully outside the court, calling for an end to their unfair trial and criminalization. For more details, Just Asia presents the speech of Michael, one labor activist, and a short interview with Chris Biantoro, Programme Officer of the Asian Legal Resource Centre.

Next, Nepali journalist Kanak Mani Dixit has been arrested by the police on corruption charges. The Commission for Investigation of Abuse of Authority (CIAA) has accused Dixit of using his public position to illegally amass wealth. It appears however, that there is a ‘personal vendetta’ against Dixit for opposing Lokman Karki’s appointment as the CIAA Chief around three years ago. Just Asia speaks to civil society leader Charan Prasai, to learn more.

Moving to Pakistan, human rights defender and fisher folk leader Mr. Saeed Baloch was tortured and manhandled for 90 days by the Pakistan Rangers. The paramilitary group was seeking revenge against the fisher community, who have been resisting extortion and the abduction of catch from their fishing launches. Mr. Baloch has now been handed over to the Karachi police, who have been forced to fabricate cases against him.

In India, Chief Justice TS Thakur spoke on Sunday at a meeting of Judges and Chief Ministers, attended by Prime Minister Narendra Modi. He made an impassioned and emotional plea to Mr. Modi to urgently fill the vacant posts of Judges and create more courts. Just Asia caught up with Executive Director of the Asian Human Rights Commission, Bijo Francis, to hear his thoughts on this.

Hong Kong’s missing bookseller case poses the “most serious challenge” to Hong Kong’s Basic Law and the One Country, Two Systems principle since the 1997 handover, said the European Union in its annual report on Monday. No credible explanation has been provided in the case of Lee Bo, a British national who disappeared from Hong Kong. This raises concerns about Chinese authorities’ application of Chinese laws to acts carried out by Hong Kong residents on Hong Kong soil, says the report.

« INDIA:Chief Justice Thakur’s anguished focus is only the tip of the iceberg

INDONESIA: Freedom of opinion and expression under serious threat »