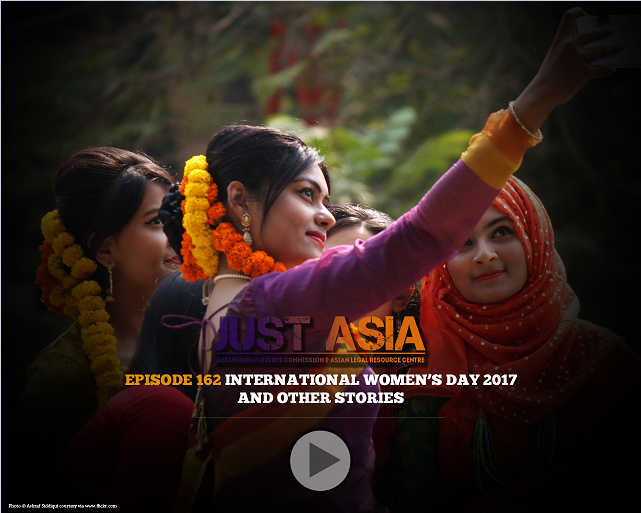 This week Just Asia begins with International Women’s Day, annually celebrated on March 8. The theme for 2017 is ‘Women in the Changing World of Work: Planet 50-50 by 2030’. The idea is to work towards the 2030 Agenda, which includes ending discrimination and violence against girls and women, and ensuring free quality education for all children. The biggest obstacle to promoting and protecting women’s rights in Asia is the lack of effective policies addressing entrenched prejudice and discrimination. Prominent Hong Kong journalist and politician Emily Lau, shares her message on International Women’s Day regarding the situation and challenges facing women in Asia.

In Indonesia, despite 17 years of political reform after Suharto, women are still frequently subjected to violence, discrimination, sexual harassment and human trafficking. Indonesia also has various discriminatory laws detrimental to women, such as Sharia Law in Aceh province and the Law on Anti-Pornography.

Moving to Pakistan, the situation faced by women throughout the country is dire, as evidenced by its 143rd ranking in the Global Gender Gap report out of 144 countries. Violence and discrimination against women is extreme, with honor killings prevalent. The recent killing of Hina Shah Nawaz, an educated young woman who was the sole breadwinner in her family, for refusing to marry her male cousin, is indicative of the societal attitudes towards the roles of women.

In Bangladesh, a new law allows girls to be married before the age of 18 in special circumstances. Human Rights Watch has called the Child Marriage Restraint Bill 2017 a “devastating step backward for the fight against child marriage”. Bangladesh has the highest rate of child marriage in Asia, with 52% of girls married by 18. With no definition of ‘special circumstances’ or ‘best interests’, rights groups are concerned the law could lead to rape victims or pregnant minors being married off to their abusers.

In Kerala, India, a Christian priest was arrested on February 27, accused of raping a 16-year old girl. The girl became pregnant from the rape and delivered a baby in January. The priest allegedly tried to cover up the incident. On March 5, the Kerala police booked 8 persons, including 5 nuns for covering up the rape, and it was reported that all the accused will be charged under the POCSO (Protection of Children from Sexual Offences) Act, 2012.

In Indonesia, a Shia community from Sampang, Madura Island have been living in public flats since they were forcibly evicted and their homes burnt by vigilante groups in 2012. They live without jobs, relying on a meager government allowance for their food and daily needs. Neither the East Java nor the central government have shown a willingness to resolve the case, or to prosecute the vigilante groups and negligent police officers. Just Asia speaks to Shia leader Tajul Muluk for details.