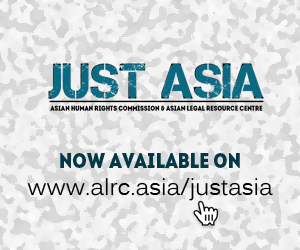 Just Asia is pleased to announce its new website www.alrc.asia/justasia. All episodes of the news programme can now be viewed there.

This week, Burma’s Parliament elected Htin Kyaw as the country’s civilian President after decades of military government. Prevented from becoming president by a constitutional clause, Aung San Suu Kyi has said she will be “above the President”.

The outcome of Nepal’s second Universal Periodic Review cycle was discussed on Wednesday, at the 31st session of the Human Rights Council. According to the Asian Legal Resource Centre, Nepal’s mass rejection of 29 recommendations made during the Review shows its commitment to human rights protection to be a lie.

In Thailand, one year after the assassination of human rights defender Mr. Chai Boontonglek, the Wiangsra Provincial Court acquitted the motorcyclist involved in his murder. Mr. Boontonglek was the fourth rights defender to be killed in the community since 2010. No one has been prosecuted for any of these killings, reportedly due to insufficient evidence.

Moving to Pakistan, more than 220 children have died in Thar district, Sindh province, over the past two and a half months, and dozens more are in hospital. While the government has done little to fill vacant medical posts in the district or ensure functioning facilities, provincial ministers are blaming underage marriages and the carelessness of mothers for the deaths.

« SRI LANKA : A Clear Indictment On Sri Lanka Police – 752 complaints against the police in three months

INDONESIA: Minority religion and belief yet to be protected by government »