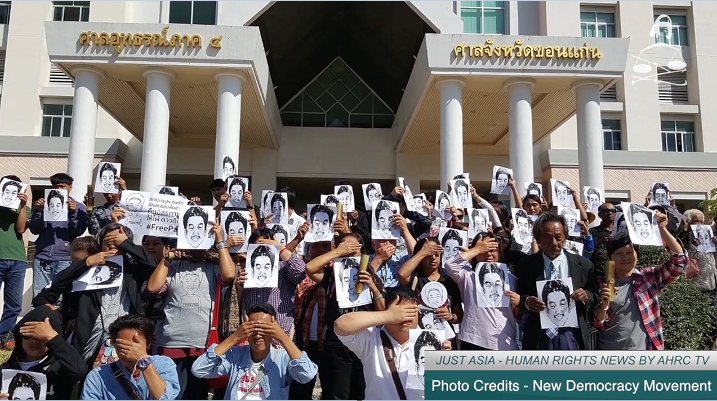 This week’s episode of Just Asia begins with Thailand, where the Khon Kaen Provincial Court on Monday, during an in-camera hearing, granted permission for police to extend the detention of Jatuphat ‘Pai’ Boonpattaraksa. A law student and key member of the New Democracy Movement (NDM), Jatuphat was arrested on lese majeste charges for sharing a BBC Thai article on King Vajiralongkorn on Facebook. He has already been in custody for 41 days and will be detained in Khon Kaen Prison for 10 more days, with the possibility of a further renewal.

In Burma, prominent lawyer, constitutional expert and advisor to Daw Aung San Suu Kyi, U Ko Ni was shot dead on the evening of January 29th. He was shot at the Yangon airport while returning from a trip to Indonesia along with other government and civic leaders. Ko Ni was one of the few Muslim professionals with close connections to senior government officials, and an outspoken opponent of the 2015 “race and religion” laws. Ko Ni was also advocating the drafting of a new constitution. The Asian Human Rights Commission urges that his assassination be investigated openly and sincerely, and at the highest levels, so that not only the shooter but also the masterminds are identified and brought to justice.

Meanwhile, in Bangladesh, the government is looking to relocate tens of thousands of Rohingya refugees to a vulnerable island in the Bay of Bengal. According to a government directive, the refugees would be transferred to ThengarChar before being repatriated to Burma. Thengar Char is engulfed by several feet of water at high tide, and has no roads or flood defences. The island can only be accessed in winter, and is a haven for pirates. Rights groups have raised strong objections, saying it amounts to a forced relocation.

In Pakistan, two nine-year-old girls have been attacked for ‘honour’. One nine-year-old girl was set on fire to settle a family land dispute in Abbottabad, KPK province. She received 50 per cent burns on her body, while her face is completely burnt. Another nine-year old girl in Jacobabad, Sindh province, was ordered to be killed under the mistaken assumption that she was pregnant. Even after it was found that she has cysts in her womb, resulting in a swollen belly, a case has been filed against her for having an illegitimate child.

Next, in Nepal, police illegally assaulted and arrested 24-year-old Arbind Kewat (Sahani) on January 15 while he was eating at a local snack shop with two friends in Dhakdhai, Rupandehi district of Nepal. Arbind is an Indian citizen, residing and working in Nepal for the past 15 years. A group of uniformed and plain clothed police officers stormed the eatery and started hitting Arbind Sahani. He was then taken to the Rupandehi District Police Office.

In Indonesia, the government is planning to resolve past human rights abuses through a ‘national council’. Under Minister of Politics, Law and Security, Mr. Wiranto, the proposed council aims to settle differences between victims and perpetrators, rather than bringing the cases to the human rights court. This is being touted as the ‘Indonesian way’ to resolve abuses, while going through the judicial process is ‘against the Indonesian culture’, and would ‘endanger unity of the nation’.