Home / INDIA: The State working against Rule of law has forced this Jal Satyagraha on us

INDIA: The State working against Rule of law has forced this Jal Satyagraha on us

Why the Jal Satyagraha?

Alok Agrawal: The Jal Satyagraha, that is going on here, is being done by the thousands of families that would be displaced by the Omkareshwar dam. The Satyagraha (standing submerged in neck-deep water until death, adopted by Gandhian fast unto death) is the culmination of the struggle they launched in 2007. The demand is simple that the displaced should be given land for land and all other rights as per the rehabilitation policy. This is what even the High Court of Madhya Pradesh has ordered way back in 2008. 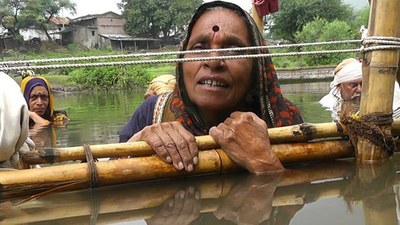 Therefore, the Supreme Court reaffirmed in 2011 that the rehabilitation policy has not been followed and people have not gotten land for their land. However, the state government did not follow the order and kept on trying to deny the people their rights.

The Grievance Redressal Authority’s order has made it clear again that the rehabilitation policy has not been followed and allocation of lands for land is mandatory. When the orders came, the government started to fill the dam instead of distributing the land. So one thing is very clear, see, the rehabilitation policy is that of government itself, and the promises made under that are the promises made by the government.

In fact, the state government has even sought and got money from the central government and other agencies in the name of costs that would be incurred by it to fulfill these promises for building the dam, but they do not want to deliver on their own promise. Moreover, when they realized that all agencies are ordering them to follow the rehabilitation policy, they decided to evict the people by drowning the lands so that they do not have to do follow that policy. The idea is simple: after evicting the people they can easily claim to the Courts that they did not find any people.

This strategy makes it a very serious issue, not merely for those being displaced here but for the very idea of democracy in India. Think of a government that is constitutionally duty bound to rehabilitate those displaced from such projects completely, and which, instead, is making all efforts to snatch their rights.
This government, clearly, is not following the rule of law, but in fact is acting against it. It is working against the rule of law and destroying it. The affected people have not taken such an extreme step just like that; they have done it only after realizing and identifying the real intent of this government. This is, therefore, not about the current Satyagraha. The government has been following the same pattern to dispossess the people from ntheir lands and livelihood. This is going on for 5 years in Omkareshwar, 8 in Indira Sagar, 16 in Maheshwar and more than 25 years in Sardar Sarovar. Why? It is because of the simple fact that the displaced have understood that the governments are not going to operate in their interest. They have understood that their governments are not working for them but against them.

They have learnt in the process that they will have to organize and fight for those rights which are legitimately theirs’. Now, this fight that the displaced of Omkareshwar are fighting for last 5 years has included so many fasts, sit ins. They have even gone to jail many times. There have been big fasts unto death and all this has culminated into this.

They have not chosen to go for the Jal Satyagraha. They have been forced into it, forced by the government itself. They are standing in the same ‘Doob’ (drowning that occurs because of filling the reservoir), before which all of them should have been rehabilitated not by choice, but because of the fact that government has plainly refused to carry out its constitutional obligations of rehabilitating them before inundating their villages. This is why they have taken to this Jal Satyagraha that is having such disastrous consequences on their health and well-being. No one would want to get his or her body rot like this. If they are still ready to sacrifice their lives for Jal Satyagraha, the cause is worth the battle.

The second experience of ours is that in the last few years, wherever the displaced did not struggle, the government just wrote them off. Remember the Indira Sagar Project before 2004, when NBA (Narmada Bachao Andolan) was yet not formed, 130 villages were demolished with no one even getting to know about that. Contrary to this, they have not been able to evacuate even one village since the organization has been formed. This is the experience we have had across Narmada valley. This is the experience of Omkareshwar, where 5 villages were demolished before the formation of NBA in the area, and no one had gotten to even know about them.

After the organization started the struggle, however, they could not demolish even one in the 5 years between 2007 and 2012. Therefore, when people fight united, they can stop the government’s oppression, at least in the most direct ones such as the demolitions of the villages through police and bulldozers after giving a little money as compensation.

The second step is that we fight for every single right of ours, and no doubt that takes a long and strenuous struggle. So the first thing is that people have successfully stopped one kind of oppression, and they are fighting with all their might for every single right of theirs, including total rehabilitation. This is why they have taken to such a hard step like Jal Satyagraha.

The impact of the Satyagraha on protesters health must be rather bad. Please tell us more about that.

Alok Agrawal Yes, being in water does harm the body, especially the skin begins to peel; off almost immediately after going underwater. In addition, they are bleeding as living under water is exposing them to attacks by insects that live in water, so all this is there. This is bound to happen, as it happens even if someone is under water for just two hours. These people are there for 9 [five more days have passed since this interview was conducted making it 14] days now. But the people have resolved that they will not stop this struggle for their rights even if it means dying and losing their bodies.

I want to add that this is not limited to a struggle for rights; this is a fight to save the democracy. If the democratically elected governments go against their own people even in a democracy like ours, then that would mean the end of everything. No one will have any rights intact; therefore, it is a struggle not only of those being displaced and denied of their rights due to the dam but one affected and their rights. It is one for safeguarding the very idea of democracy in India. The people are ready to lay even their lives, if that is the price it takes.

« INDONESIA: Let the voices of Papua be heard

CAMBODIA: The Citizens must help themselves »