Home / INDONESIA: Let the voices of Papua be heard

INDONESIA: Let the voices of Papua be heard 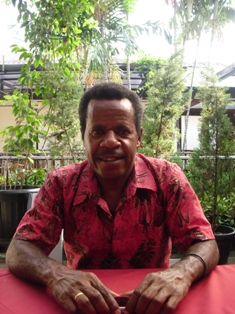 An interview with Theo Hesegem, a Papuan activist working for Jaringan Advokasi Penegakan Hukum dan HAM (Law Enforcement and Human Rights Advocacy Network, JAPHAM) based in Wamena, Papua. The focus of his and his organisation’s work is human rights issues that take place in the central mountain area of Papua.

It has been said that there has been an escalated violence in Papua recently. What is actually happening there?
In my view, violence in Papua has been happening since 1961 when it became a part of Indonesia. Human rights violations are nothing new for us, Papuans. We have been killed, tortured, the women have been raped, and we have always been labelled as separatists. Activists have been killed: Theys Eluay, Yawan Wayeni, Opius Tabuni, Kelly Walik and just recently Mako Tabuni. Whereas it was obvious that it was Komando Pasukan Khusus (Indonesian Army Special Forces, Kopassus) who killed Theys, the murderers of the others remain a mystery. A German national was also shot last month and it is still unclear who actually did it. The police, however, accused the activists of Komite Nasional Papua Barat (West Papua National Committee, KNPB) for the shooting. For this reason, Mako Tabuni was shot. This, however, is actually absurd. If the police really think Mako Tabuni was involved in the shooting should he not have been arrested so the police can obtain more information on the case? If he died then the police have actually failed because they will not get further information. And then there was also an attack directed against civilians in Wamena.

Could you please tell us more about the attack against civilians in Wamena last month?
What happened in Wamena was actually purely criminal and has nothing to do with politics at all. Two members of a battalion hit a 10-year old boy with a motorbike and the local residents got angry because of this so they later stabbed the battalion members. The military did not accept this so they conducted an ‘operation’. This ‘operation’, however, was excessive because it was performed up to 2 kilometres away from the location of the stabbing. The houses burnt during the attack were not owned by those who stabbed the battalion members and 14 people who were stabbed on the street had nothing to do with the incident whatsoever. The attack was brutish, houses were burnt, their windows were smashed, shops owned by non-Papuans were also set to the fire, and cars as well as motorbikes were burnt. At that time, there were actually police coming to the location but they later decided to pull out just because the military was there.

I met the Komandan Kodim (Commander of the Military District Command, Dandim) later and told him that I just did not understand this. The stabbing happened in Sinakma but the ‘operation’ was performed up to the town and many government facilities were destroyed. I asked him to give some explanation on this but he was not able to do so. I told him as well that the guns you were given are to protect us, not to kill us.

Considering that the shooting of the German national took place only days after the UN UPR Session where Indonesian government was heavily criticised for its human rights record in Papua, do you think the escalated violence has anything to do with the UN UPR session?
I think many countries have expressed strong concern on what is happening in Papua and this has caused some worries amongst certain people. They think, “The support is really strong, we should not let any human rights intervention to Papua.” For this reason, problems were deliberately designed in Papua so people from outside will not come to Papua and just stop by in Jakarta. Problems were created so people would think, “there are too many problems in Papua so we should not go there”, “Papua is not safe”, “it is inconvenient to go to Papua” etc. I have heard that actually there was a team formed by the German parliamentarians who would come to Papua but due to security reasons, they could not come.

What do you think of law enforcement in Papua?
Ideally, who you are and what your background is should not be relevant when it comes to law enforcement. Everybody should be equal before the law — whether you are a President, a minister or a commander, you should not be above the law. However, this is not the case in Papua. When a case involves a Papuan or some Papuans, for instance, a Papuan stole something or stabbed somebody else then it is likely that he or she would be brought before the court. Yet when it comes to cases of shootings against civilians conducted by security officers, the perpetrators would never be questioned and they would never be brought before the court. Or if they were, the punishments they receive would be very light, although the Penal Code explicitly prohibits killings. So, in Papua, the law is applicable only for civilians. Law enforcement is really weak and it takes sides. Law enforcement takes the side of those with power.

What have you done to deal with the recent escalated violence in Papua?
I would only be able to talk about what I have done to human rights violations took place in Wamena and the central mountain area. I came to Jakarta specifically to raise the issue concerning the attack against civilians in Wamena sometime ago. I met with the Chairman of the First Commission of the Indonesian parliament and he promised he would form a team who will conduct a visit to Papua. This, however, is still not happening. The Chairman also asked me to keep him posted with any problems in Papua and he gave me his personal number. I then visited Komisi Nasional Hak Asasi Manusia (National Human Rights Commission, Komnas HAM) who also promised to form a team to visit Wamena. However, since the commissioners of Komnas HAM are still not definitive, they said Komnas HAM would be able to send a team to Wamena later when the new commissioners have been selected.

I was hoping to be able to meet with the Military Chief Commander but he was heading to Australia. With the help of KontraS, I also met with the media but to be honest I do not really believe the media in Jakarta. I also held a diplomat briefing which was attended by the representatives of Japan, Britain, Netherlands, and Germany. I had a personal meeting with the representatives of the Switzerland government as well.

You mentioned you do not really believe the media in Jakarta. Why?
Sometime ago I made a phone call from Jayapura to SCTV (one of TV stations in Indonesia) and complained to them because they said Mako was going to shoot the police officers, that was why he was shot. However, this is not what happened. I told SCTV to check first what actually has happened in the field and not just broadcast whatever information they received. I also complained to Kompas (one of the national newspapers) because they put my picture on the paper but did not include any single thing I mentioned about human rights situation and law enforcement in Papua. I just think the media in Jakarta does not make enough effort to dig the real information, they simply broadcast or publish whatever information they got. But it might be the case that there were pressures against them — probably somebody told them what to publish. Yet I am aware that the media should be independent, the press should be free.

The views shared in this article do not necessarily reflect those of the AHRC, and the AHRC takes no responsibility for them

INDIA: The State working against Rule of law has forced this Jal Satyagraha on us »