The authorities in Thailand continue to detain persons without charge under emergency regulations imposed in response to anti-government demonstrations in Bangkok during April and May. In this appeal we bring you the case of one person, Sombat Boonngamanong, who was detained for holding a memorial for victims of the violence on 26 June 2010. We are calling for his immediate release along with the release of all other persons held under the emergency regulations, and for the non-renewal of the regulations today, on 6 July 2010. 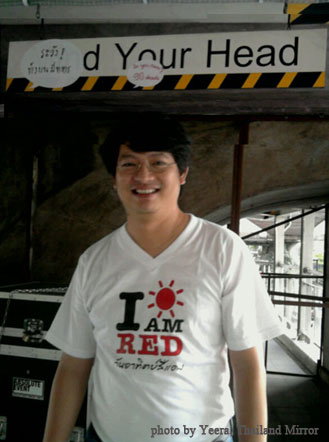 On 26 June 2010, Sombat Boonngamanong (pictured) held a peaceful memorial at the site of killings that took place during the crackdown on anti-government protestors in Bangkok in May. It involved the tying of ribbons to a signpost in remembrance. Photographs and details of his act are on the website of independent news group Prachatai: http://www.prachatai.com/english/node/1910.

In response to the act, a court issued an order for his immediate detention under the Emergency Decree currently in force in Bangkok and 23 other provinces of central, north and northeastern Thailand. Because he cannot be detained at an ordinary detention facility under the decree, he was taken to the Border Patrol Police 1st Region Command Office in Pathumthani province.

The AHRC has previously issued an appeal on hundreds of other persons detained under the decree (UAC-089-2010).

On 29 June 2010 human rights lawyers helped Sombat to file a motion against his detention, requesting his release on the grounds that his detention was in violation of his rights to freedom of expression and peaceful gathering, as provided for in the constitution and international law. Although the court allowed the motion, on July 2 it ordered that Sombat be kept in custody for another week, stating that he had violated the terms of the decree — which are so ambiguous that virtually anything can be construed as constituting a violation — and that he may do so again.

Under the decree the court can order detention in seven-day increments for up to 30 days before charges need to be brought. Therefore Sombat is due to come before the court again on 9 July.

Please see the sample letter below to call for Sombat’s release and for the lifting of emergency regulations in Thailand.

Sombat Boonngamanong is the founder and former chairperson of the Mirror Foundation, based in Chiang Rai, which works with ethnic minority groups in northern Thailand to help people improve their lives while retaining their cultural identities. For this and other work to support local communities and protect human rights, Sombat was nominated and selected to join the international Ashoka Fellowship of social entrepreneurs.

Since the 19 September 2006 coup Sombat has been an outspoken critic of successive military-backed governments, advocating non-violent dissent. He has led the Red Sunday Group to engage in symbolic actions against the constriction of political space in Thailand. The group’s activities include mobile political performance art and, as its name suggests, wearing red on Sundays.

From the moment that the Emergency Decree was introduced in Thailand the AHRC has strongly opposed it as a law that would inevitably result in gross abuses of human rights. For many years it has been applied in the far south of the country, with disastrous results. In recent days and weeks the AHRC has also issued a series of statements and open letters calling for it to be lifted from the other parts of the country where it is now in effect. See among them: STM-143-2010; STM-139-2010; OLT-007-2010; OLT-005-2010.

For further information on Thailand visit the AHRC Thailand website or go to the AHRC homepage and type Thailand into the search box on the top left hand side. See also the End Emergency Decree page: http://thailand.ahrchk.net/edecree

Please write to the persons listed below to call for the release of Sombat and other detainees, and for the non-renewal of the Emergency Decree.

Please be informed that the AHRC is writing separate letters to the UN Working Group on Arbitrary Detention, the Special Rapporteur on the independence of judges and lawyers, and the regional human rights office for Southeast Asia concerning the case of Sombat and other detainees in Thaila

I am writing to call for the immediate release of Sombat Boonngamanong from custody, for the release of all other persons detained under the terms of the Emergency Decree on Government Administration in States of Emergency B.E. 2548 (2005), and for the non-renewal of the decree.

I know that on 26 June 2010 the Criminal Court in Bangkok issued an emergency arrest and detention warrant for social entrepreneur Sombat Boonngamanong because of a peaceful political protest against state repression of demonstrators in Bangkok. Upon his arrest, Sombat was taken for detention at the Border Patrol Police 1st Region Command Office in Pathumthani province.

On 29 June 2010, with assistance from lawyers from the Human Rights and Legal Assistance Center for Those Affected from Political Turmoil, Sombat filed a motion against his detention and requesting his release, on the grounds that it is an illegal detention which is in violation of his rights to freedom of expression and peaceful gathering as provided for in the constitution and International Covenant on Civil and Political Rights.

On 2 July 2010 the Criminal Court heard and denied the motion to release Sombat, on the grounds that he had on 21 May 2010 participated in a political gathering in violation of the Emergency Decree, and on 26 June 2010 had again engaged in a political act. It was concluded that he could commit further violations if released and that state officers must be given more time for their interrogation. His detention was extended for an additional seven days.

I am aware that hundreds of other persons are currently being detained in a similar fashion and are subject only to cursory judicial inquiries on spurious pretexts for their continued detention. I believe that the case of Sombat–whose “offence” was to peacefully tie some ribbons to a sign at the site of killings during the crackdown on protests in Bangkok–vividly illustrates the extent to which the Emergency Decree is being misused by the authorities in Thailand in violation of international human rights standards.

I call for the immediate release of Sombat Boonngamanong and all persons in custody under the Emergency Decree, and for the non-renewal of the decree, which is in breach of Thailand’s obligations under the International Covenant on Civil and Political Rights.

I also urge the government to arrange for the International Committee of the Red Cross to have access to all places of detention and all detainees–whether under the Emergency Decree or among those already charged with offences–in accordance with its globally recognized mandate.

BANGLADESH: Detective branch police illegally arrest a man and fabricate an arms case against him after his family fail to pay a bribe »