PAKISTAN/USA: A lady doctor remains missing with her three children five years after her arrest

[NOTICE: The AHRC has developed this automatic letter-sending system using the “button” below. However, in this appeal, we could not include e-mail addresses of some of the Pakistan authorities. We encourage you to send your appeal letters via fax or post to those people. Fax numbers and postal addresses of the Pakistan authorities are attached below with this appeal. Thank you.]

The Asian Human Rights Commission (AHRC) has received information that Dr. Afia Siddiqui, was arrested along with her three children by a Pakistani intelligence agency in early 2003 and has been missing since then. American and Pakistani intelligence agencies confirmed that she had been arrested in connection with Al-Qaeda, the terrorist organisation run by Osama Bin Laden. However, later both agencies denied that she had been arrested. Dr. Afia’s whereabouts remain unknown but it is suspected that she is being held in an American detention centre. 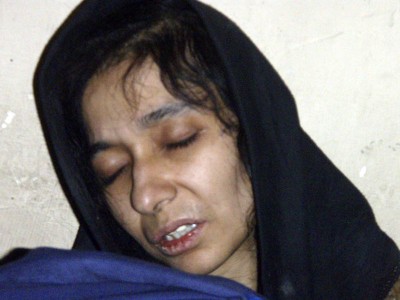 Dr. Afia Siddiqui [Photo] left her mother’s house in Gulshan-e-Iqbal, Karachi, Sindh province, along with her three children, in a Metro-cab on March 30, 2003 to catch a flight for Rawalpindi, Punjab province, but never reached the airport. The press reports claimed that Dr. Afia had been picked-up by Pakistani intelligence agencies while on her way to the airport and initial reports suggested that she was handed over to the American Federal Bureau of Investigation (FBI). At the time of her arrest she was 30 years and the mother of three sons the oldest of which was four and the youngest only one month.

A few days later an American news channel, NBC, reported that Afia had been arrested in Pakistan on suspicion of facilitating money transfers for terror networks of Osama Bin Laden. The mother of the victim, Mrs. Ismat (who has since passed away) termed the NBC report absurd. She went on to say that Dr. Afia is a neurological scientist and has been living with her husband, Amjad, in the USA for several years.

On April 1, 2003, a small news item was published in an Urdu daily with reference to a press conference of the then Interior Minister Faisal Saleh Hayat. When questioned with regard to Dr. Afia’s arrest he denied that she had been arrested. This was followed by another Urdu daily article on April 2 regarding another press conference in which the same minister said Dr. Afia was connected to Al Qaeda and that she had not been arrested as she was absconding. He added: “You will be astonished to know about the activities of Dr. Afia” A Monthly English magazine of Karachi in a special coverage on Dr. Afia reported that one week after her disappearance, a plain clothed intelligence went to her mother’s house and warned her, “We know that you are connected to higher-ups but do not make an issue out of your daughter’s disappearance.” According to the report the mother was threatened her with ‘dire consequences’ if she made a fuss.

Whilst Dr. Afia’s whereabouts remain unknown, there are reports of a woman called ‘Prisoner 650’ is being detained in Afghanistan’s Bagram prison and that she has been tortured to the point where she has lost her mind. Britain’s Lord Nazeer Ahmed, (of the House of Lords), asked questions in the House about the condition of Prisoner 650 who, according to him is physically tortured and continuously raped by the officers at prison. Lord Nazeer has also submitted that Prisoner 650 has no separate toilet facilities and has to attend to her bathing and movements in full view of the other prisoners.

Also, on July 6, 2008 a British journalist, Yvonne Ridley, called for help for a Pakistani woman she believes has been held in isolation by the Americans in their Bagram detention centre in Afghanistan, for over four years. “I call her the ‘grey lady’ because she is almost a ghost, a spectre whose cries and screams continues to haunt those who heard her,” Ms Ridley said at a press conference.

Ms Ridley, who went to Pakistan to appeal for help, said the case came to her attention when she read the book, The Enemy Combatant, by a former Guantanamo detainee, Moazzam Begg. After being seized in February 2002 in Islamabad, Mr Begg was held in detention centres in Kandahar and Bagram for about a year before he was transferred to Guantanamo Bay. He recounted his experiences in the book after his release in 2005. Mr. Imran Khan, leader of Justice Party (T.I) suspects that prisoner 650 is the Dr. Afia Siddiqui and USA and Pakistani authorities are hiding facts of ‘Prisoner 650’.

To date, neither the American nor the Pakistani government have come out about the arrest and detention of Dr. Afia in either Bagram or Guantanamo Bay where suspected terrorists are held. On December 30, 2003 Dr. Fawzia Siddiqui, Dr. Afias elder sister met with Mr Faisal Saleh Hayat at Islamabad with Mr Ejazul Haq, MNA, regarding the whereabouts of Dr. Afiai. Mr Faisal told Dr. Fawzia and Mr Ejazul Haq that according to his information Dr. Afia Siddiqui had already been released and that she (Dr. Fawzia) should go home and wait for a phone call from her sister.

Dr. Afia Siddiqui, who studied at the Massachusetts Institute of Technology, US, for about 10 years and did her PhD in genetics, returned to Pakistan in 2002. Having failed to get a suitable job, she again visited the US on a valid visa in February 2003 to search for a job and to submit an application to the US immigration authorities. She moved there freely and came back to Karachi by the end of February 2003 after renting a post office box in her name in Maryland for the receipt of her mail. It has been claimed by the FBI (Newsweek International, June 23, 2003, issue) that the box was hired for one Mr Majid Khan, an alleged member of Al Qaeda residing in Baltimore.

Throughout March 2003 flashes of the particulars of Dr. Afia were telecast with her photo on American TV channels and radios painting her as a dangerous Al Qaeda person needed by the FBI for interrogation. On learning of the FBI campaign against her she went underground in Karachi and remained so till her kidnapping. The June 23, 2003, issue of Newsweek International was exclusively devoted to Al Qaeda. The core of the issue was an article “Al Qaeda’s Network in America”. The article has three photographs of so-called Al Qaeda members – Khalid Sheikh Mohammad, Dr. Afia Siddiqui and Ali S. Al Marri of Qatar who has studied in the US like Dr. Siddiqui and had long since returned to his homeland. In this article, which has been authored by eight journalists who had access to FBI records, the only charge leveled against Dr. Afia is that “she rented a post-office box to help a former resident of Baltimore named Majid Khan (alleged Al Qaeda suspect) to help establish his US identity.

SUGGESTED ACTION:
Please write to the relevant authorities listed below and request them to investigate immediately. Dr. Afias whereabouts must be confirmed and the safety of her children assured. Regardless of whether Dr. Afia is Prisoner 650 or not the fact is that she has been missing, along with her children for five years. The governments of the USA and Pakistan at first confirmed her arrest and then denied it. Both governments have a duty to report any information they might have on the matter.

Please be informed that the AHRC has also written separate letter to the Special Rapporteurs on the Question of Torture, Violence against Women and the UN Working Groups on Enforced or Involuntary Disappearances and on arbitrary detention calling for their intervention in this case.

PAKISTAN/USA: A lady doctor is missing with her three children since five years after her arrest

Name of victim: Ms. Dr. Afia Siddiqui and her three children
Block 7, Gulshan-e-Iqbal, Karachi, Sindh province
The units of the alleged perpetrators: Intelligence agencies of Pakistan and the Federal Bureau of Investigation (FBI-US)

I am shocked to know that Dr. Afia Siddiqui, a Pakistani citizen has been missing with her three children since April 2003, after her arrest by intelligence agencies of Pakistan. The whereabouts of children is also unknown, which is a serious act of negligence on the part of the government with regard to its responsibility to protect the citizen of the Pakistan.

According to the information I have received Dr. Afia was picked-up by Pakistani intelligence agencies while on her way to the airport and initial reports suggested that she was handed over to the American FBI. A few days later an American news channel, NBC, reported that Afia had been arrested in Pakistan on suspicion of facilitating money transfers for terror networks of Osama Bin Laden.

On April 1, 2003, a small news item was published in an Urdu daily with reference to a press conference of then Interior Minister Faisal Saleh Hayat when, in reply to a question regarding the arrest of Dr. Siddiqui, he said she has not been arrested. But in another report the minister for interior said,”You will be astonished to know about the activities of Dr. Afia.” A weekly English magazine in its special coverage on Dr. Afia reported that after one week of the incident, an intelligence agency official, a motor cyclist in plain clothes, came to the house of her mother and warned “We know that you are connected to higher-ups but do not make an issue out of her daughter’s disappearance” and threatened her with dire consequences. After this development the whereabouts of Dr. Afia and her children are yet unknown.

What is also of grave concern to me is that when she was arrested by Pakistani intelligence authorities she was handed over to American intelligence agencies without being tried in Pakistan, I do not find any rationale in sending her along with her children to other country when there are Pakistani laws to deal with the suspected terrorists. It is known that President Musharraf handed over 600 suspected terrorists to America.

There are reports that in Afghanistan’s prison of Bagram there is a woman prison known as Prisoner 650 and that she has been severely tortured. It is also widely suspected that Prisoner 650 is Dr. Afia Siddiqui. This prisoner has reportedly lost her mind due to constant rape and ill treatment.

I remind you that this is the duty of coalition government under Prime Minister Mr. Yousaf Raza Gillani to probe cases of those Pakistani suspected terrorists who have been handed over to foreign forces in the name of war on terror. The government should also inform Pakistani citizens about the whereabouts of Dr. Afia Siddiqui and her children. I also demand that government should also ensure the safety of her children.