Home / News / BANGLADESH: Police pressure the victim of an acid attack to withdraw her case and marry her attacker

BANGLADESH: Police pressure the victim of an acid attack to withdraw her case and marry her attacker

The Asian Human Rights Commission (AHRC) has discovered that Koyra police are working to support a man who threw acid at a teenage girl, and have pressured her to marry him. The police investigator allegedly used intimidation to try and get the case withdrawn, following bribes from the accused, and the attacker appears to have the backing of ruling party members. The latest investigation report cleared and discharged him despite strong evidence linking him to the crime, and no action has been taken against the officer responsible. 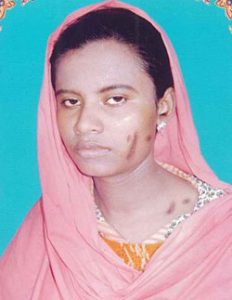 After having his marriage proposal refused a number of times, Mr. Ayub Mollah (20) reportedly took to teasing and harassing Ms. Reshma (18), whose parents work out of the country. After she complained to the man’s family he threatened her with an acid attack which, on 7 May, he carried out. Reshma had already moved away to her maternal uncle’s village to escape the threat, but on a trip back to pick up some belongings she reports that Ayub entered the house, sexually propositioned her and, when she said no, threw acid at her face. Neighbours intervened after hearing her cries, and Ayub fled the scene. The acid had burned her face, ear and left shoulder and Reshma was admitted to the Khulna Medical College Hospital (KMCH).

The One-Stop Crisis Centre (OCC) at the KMCH drafted a complaint, which they sent to the Koyra police on the 13 Oct, to be used in a First Information Report (FIR). Police did not record the complaint and various sources have reported that this is because a bribe had changed hands. A month of pressure from civilians meant that an FIR was lodged on 12 June (FIR No. 10/09) under Section 5 (B) of the Acid Crime Prevention Act-2002, though officers illegally changed the date of Reshma’s complaint, which she had signed and dated.

Eyewitnesses then report that the Investigating Officer (IO), Sub Inspector (SI) Mr. Md. Abdul Hashem, went to the area of the crime-scene and accepted refreshment from Ayub, along with various other members of the ruling political party, the Bangladesh Awami League. He then visited Reshma’s house to insist that she withdraw her case. He reportedly told her that she had no chance of winning the case because she was too poor, and her attacker’s supporters too powerful. The SI then suggested that she settle for a cash payment and consider marrying Ayub, for her own safety.

Ayub and his political associates then started to harass Reshma, threatening her life, and other witnesses have also allegedly been warned not to testify. At just 18, Reshma is extremely vulnerable, and is losing her will to fight the case in court. She recently told local human rights defenders: ‘I don’t trust the police now; I can’t be hopeful about the fate of my case because of the role of the IO. The witnesses of my case are also very afraid. Will it be possible to get justice from the court if the police conduct investigations in this way?’

She has lodged a General Diary (a legal communication) with the Koyra police seeking physical and legal protection from the police but has been given none, however SI Hashem’s final report, given in September, discharges Ayub despite the evidence against him.

According to Section 13 of the Acid Crime Prevention Act-2002, any kind of negligence, misconduct and procedural inefficiency during the investigation of the case can be met with legal action. Along with the misconduct already mentioned above, SI Hashem (working under Mr. Kazi Daud Hossain, Inspector of Police and Officer-in-Charge at Koyra) was legally obliged to submit his investigation report to the court within thirty working days of the investigation beginning; in this case on June 12.

If there is an acceptable explanation from the officer investigating an acid attack, the court can extend this twice by 15 days (Section 11 of the Acid Crime Prevention Act-2002). The SI’s report in September was long overdue.

Please write to the officials listed below calling for their investigation into the negligence and alleged corruption at Koyra police station, for a reopening of the investigation into Ms Reshma’s attack, and for the protection of the victim.

The Asian Human Rights Commission has already written a separate letter to the UN Special Rapporteur on Violence against Women, urging her intervention into this case.

BANGLADESH: Police pressure the victim of an acid attack to withdraw her case and marry her attacker

I am writing to express my deepest concern over the acid attack of a teenage girl, who has since been repeatedly intimidated by the alleged attacker and police while fighting her case. I am appalled to hear that Koyra police are reportedly working to support the attacker rather than the vulnerable victim, and have pressured her to marry him. The final investigation report cleared and discharged the accused despite strong evidence linking him to the crime, and I demand to know why no action has been taken against the officer responsible.

According to the case information I have received, Mr. Ayub Mollah took to harassing and threatening Ms. Reshma (whose parents work out of the country) after a marriage refusal. The victim moved away to escape the threat, but on a brief trip back home she reports that Mr. Mollah entered the house, sexually propositioned her and threw acid at her face. She suffered burns to her face, ear and left shoulder; neighbours admitted her to the Khulna Medical College Hospital (KMCH).

However I am disturbed to hear that the complaint  drafted by the One-Stop Crisis Centre (OCC) at the KMCH on 13 Oct  was not recorded. I hear that it was only lodged after a full month of pressure from civilians (FIR No. 10/09), and that officers illegally changed the date of the signed complaint.

Eyewitnesses then report that the Investigating Officer (IO), Sub Inspector (SI) Mr. Md. Abdul Hashem, went to the area of the crime-scene and accepted refreshment from Mr. Mollah, along with various other members of the ruling political party, the Bangladesh Awami League, before visiting the victim at home to insist that she withdraw her case. The SI suggested that she settle for a cash payment and, I am outraged to hear, marry Mr. Mollah for her own safety and benefit.

I hear that Mr. Mollah and his political associates have given death threats to Reshma and warned other witnesses not to testify. While she has lodged a General Diary with the Koyra police seeking protection and has been given none, the perpetrator has been granted his own form of police protection: despite strong evidence to the contrary, SI Hashem’s overdue final report in September discharged him.

I strongly urge the Bangladeshi authorities to rescue the reputation of law enforcement in this area, and give the crime the investigation it is due by law; taking particular note of the age and vulnerability of the victim. Such acid attacks against women must only be met with strong criminal sanctions if they are to be discouraged. The alleged illegal actions of the Koyra police, particularly SI Md. Abdul Hashem, must be probed and those proved guilty brought before the law and removed from their positions. As is evident from this case, the Bangladesh police require thorough reforms for the sake of the rule of law in the country.

I trust you will take stern and prompt action into this case.