Home / News / INDONESIA: A tortured inmate and his family in West Sumatra are under threat for seeking justice

INDONESIA: A tortured inmate and his family in West Sumatra are under threat for seeking justice

The Asian Human Rights Commission (AHRC) has received information from the Padang Legal Aid Institute (LBH Padang) regarding the torture of an inmate by two prison guards in Solok, West Sumatra. Following the abuse, the inmate and his family complained to the relevant authorities. The inmate and his family’s eagerness to seek justice, however, resulted in threats and intimidation. 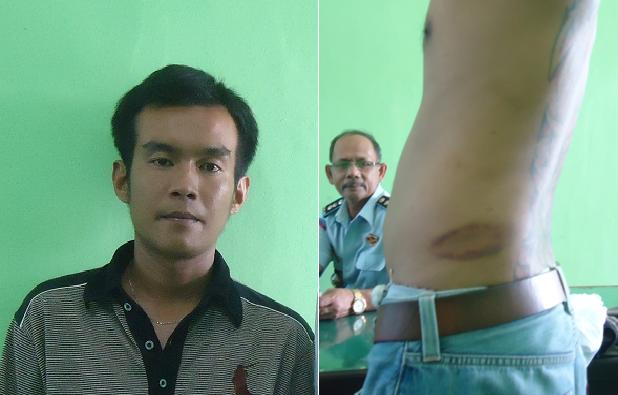 According to the information obtained from LBH Padang, a 28-year-old inmate named Riko Yeyandra, was receiving the visit of a friend on 8 September 2013 at Class IIB Solok Correctional Facility (Lapas Solok) where he was being detained. Only a few minutes after he started talking to his friend, Riko was asked to come to another room where two prison guards, Dedi Bahari and Masri Siswanto, were waiting for him. The two prison guards kicked Riko in his left waist so forcefully that it was bruised, hit him on his head and electrocuted him in different parts of his body, including his hands. Riko asked the two prison guards what he had done wrong, to which the latter responded, ‘if you are not pleased (about this) then just report us to the Head of the Correctional Facility’. (Photo: Riko Yeyandra was kicked, beaten up and electrocuted. He is suffering from bruises and injuries in different parts of his body. Courtesy of LBH Padang)

After torturing Riko, the two prison guards sent Riko back to the room where his friend was waiting. Using the camera of her phone, the friend managed to take several pictures of Riko who was bruised on different parts of his body. She later informed Riko’s family and uploaded the pictures she took on the social media website Facebook. It has been reported that the friend received a phone call afterwards from a staff of the Correctional Facility who asked her to delete the pictures from Facebook as they are considered to be ‘defamatory’ to the institution.

On 11 September 2013, Riko reported the abuse he had suffered to Matrizal, the Correctional Facility’s Interim Head of Serenity and Order. The next day, Matrizal met Riko with two prison guards who admitted their wrongdoings and apologised for the abuse. On 13 September 2013, Riko was visited by his family who also complained to Matrizal. Responding to such complaint, Matrizal asked the two prison guards to apologise to the family. He also promised Riko’s family that he would not protect the guards who have tortured their son.

Three days later on 16 September 2013, Riko’s family was accompanied by LBH Padang to lodge a criminal complaint to the West Sumatra Regional Police. The task of investigating the complaint was later delegated to Solok District Police.

In the afternoon of that day, a sibling and the uncle of Riko received phone calls from an inmate in Lapas Solok who asked them not to make any further fuss on the abuse Riko had experienced otherwise ‘200 inmates in Lapas Solok will be assaulted’. Other members of Riko’s family have also received text messages from other inmates to delete the pictures of Riko on Facebook as well as to withdraw their complaint to the police. LBH Padang reported that the intimidation from the other inmates was allegedly encouraged by the authorities of Lapas Solok who have threatened to deny the inmates’ right to parole if they refused to do so.

On 17 September 2013, a team from LBH Padang conducted meetings with the authorities of Lapas Solok, as well as the local offices of the Head of Ministry of Law and Human Rights and the National Human Rights Commission in West Sumatra. In these meetings, LBH Padang requested the relevant authorities to immediately transfer Riko to a safer correctional facility. As soon as the meeting with the National Human Rights Commission was concluded, Riko’s parents received a phone call from the Ministry of Law and Human Rights’ local office in West Sumatra who urged the family not to pursue the case any further. On the same day, LBH Padang also visited Riko in Lapas Solok. Riko, however, could not speak to his lawyers from LBH Padang freely as the Head of the Correctional Facility, Sofyan, was also present.

LBH Padang reported that on 21 September 2013 Riko was transferred to Sijunjung Correctional Facility (Lapas Sijunjung) which is 3-4 hours away drive from the province’s capital, Padang, or Solok, the city where the abuses took place. Such decision was heavily criticized by LBH Padang which believes it is a deliberate attempt to disrupt the ongoing legal proceedings against the two prison guards. In the previous meetings with several relevant authorities, LBH Padang has specifically recommended the transfer of Riko to Muaro Padang or Bukittinggi Correctional Facilities which are not too far from Solok. According to an official letter from Lapas Solok, the relocation to Lapas Sijunjung is only temporary until the Head of Ministry of Law and Human Rights’ local office in West Sumatra has reached a final decision.

It has been reported that on 1 October 2013 the Head of Lapas Solok, Sofyan, visited Solok District Police urging the cross examinations between the two prison guards to be postponed.

The AHRC has received a number of torture cases from different parts of Indonesia in the last few years. Some of the cases were reported to take place in West Sumatra, which include the torture of two minors in Sijunjung as well as the torture of Erik Alamsyah. The victims in both cases were tortured to death. The police officers who perpetrated the abuses in these cases were sentenced to lenient punishment. In the case of Sijunjung, for instance, Muaro Sijunjung District Court sentenced the four police officers to 18 months to three years of imprisonment without acknowledging that the officers were responsible for the death of the two minors.

Torture is yet to be criminalised in Indonesia despite the country’s ratification to the UN Convention against Torture and other Cruel, Inhuman, or Degrading Treatment or Punishment in 1998. The Convention does not only call for the criminalisation of torture but also the punishment of the abuse that the failure to effectively investigate torture complaints is considered to be a violation to the right not to be torture, as indicated by Articles 12-13 of the Convention.

SUGGESTED ACTION:
Please write to the authorities listed below urging them to ensure the security of Riko Yeyandra and his family is guaranteed. Please also urge them to make sure that the ongoing criminal investigation on the torture allegation is carried out effectively and independently, and that the two prison guards are adequately punished. It is important to urge the relevant authorities to ensure that Riko and his family are granted with adequate compensation.

INDONESIA: A tortured inmate and his family in West Sumatra are under threat for seeking justice

I am writing to voice my deep concern regarding the torture of Riko Yeyandra, a 28 year old inmate detained in Class IIB Solok Correctional Facility in West Sumatra. I have received credible information from Padang Legal Aid Institution (LBH Padang) that on 8 September 2013, Riko was physically assaulted by two prison guards named Dedi Bahari and Masri Siswanto. It has been reported that the two prison guards kicked, beat up and electrocuted Riko in different parts of his body causing injuries. I have been informed that the pictures of Riko and the bruises on his body have been uploaded on Facebook by a friend of his who happened to be visiting him on the day of Riko was tortured.

I have learned that the family of Riko along with their lawyers from LBH Padang have submitted complaints to relevant state institutions, including West Sumatra Regional Police as well as the local office of the Ministry of Law and Human Rights in West Sumatra. I regret to learn that, instead of adequate and effective follow ups, the complaints have led to threats and intimidation against Riko and his family. I was informed, for instance, that a friend who has uploaded Riko’s pictures on Facebook has been contacted by a staff of Solok Correctional Facility who asked her to take down the pictures as they are considered to be ‘defamatory’. Apart from that, LBH Padang has reported other forms of intimidation received by Riko’s family as follows:

In addition to the intimidation experienced by Riko and his family, I have been informed that the authorities have attempted to hinder the criminal investigation against the two prison guards who tortured Riko. I have learned that on 21 September 2013, Riko was relocated to Sijunjung Correctional Facility. Whereas the relocation of Riko is necessary to ensure his safety, I regret that the correctional facility in which Riko is currently being detained is located way too far from Padang, the capital city of West Sumatra, or Solok, the city in which the abuses took place. The 3-4 hour drive distance has made it more difficult for Riko’s lawyers and his family to visit him.

The attempts to hinder the criminal investigation against the two prison guards who tortured Riko can also be concluded from the visit of Sofyan, the Head of Class IIB Solok Correctional Facility to Solok District Police Station on 1 October 2013 in order to urge the police to postpone the cross examinations of the two prison guards.

I am aware that Indonesia is a state party to the UN Convention against Torture and Other Cruel, Inhuman or Degrading Treatment or Punishment (UN CAT). I am saddened to learn that the Convention has been violated in many ways in this case. I take notice that it is not only torture was practiced in this case, but also it is actively supported by different state officials. Given the responses given by the local office of the Ministry of Law and Human Rights in West Sumatra as well as the authorities of Class IIB Solok Correctional Facility, I believe that such accusation is not baseless.

I am calling you to take all the necessary measures within your authority to ensure that the ongoing criminal investigation on the torture allegation in this case to be carried out independently and effectively. The investigation should not be narrowed down to only to bring the two prison guards who tortured Riko to justice, but also extends to state officials who have intimidated the Riko and his family as well as those who attempted to hinder the criminal investigation. I wish to emphasise that the failure to do so is a violation to Indonesia’s international human rights obligation to punish torture as stipulated under the UN CAT.

I am also calling you to ensure the safety of Riko and his family and to provide them with adequate compensation for all the loss they have suffered.

I look forward for your positive and swift action in this matter.

« SRI LANKA: An Appeal for the Early Publication of the Inquiry Reports on the Welikada and Vavuniya Prison Riots

SRI LANKA: In Ganeshan Nimalaruban’s case the de facto CJ holds that inquiry into a prison death will encourage prisoners to riot »