The Asian Human Rights Commission (AHRC) writes to inform you that the five men, whom the police arbitrarily arrested in San Fernando, Pampanga, had been tortured while in police custody. One of the victims, who revealed his ordeal in an interview, said the police suffocated him, severely assaulted him, burnt his skin with lit cigarette and threatened to harm his family.

CASE NARRATIVE: (According to the testimony of Lenin Salas, one of the torture victims)

On August 3, 2010, at 9:30pm Lenin Salas, Jerry Simbulan, Daniel Joseph Navarro and Rodwin Tala were arrested by elements of San Fernando City Police and the Provincial Public Safety Office under Superintendent (Supt) Madzgani Mukaram in Villa Barcelona Subdivision Barangay Sindalan, of the same city over their allege involvement with the Marxist Leninist Party of the Philippines (MLPP-RHB), an illegal armed group.

On August 5, one of the victims–Lenin Salas, was interviewed while in detention. In his account of the incident, he said that while he and another companion were at the house of a friend, Donald, in the same subdivision, the security guard of the subdivision approached them. They were asked who they were looking for. When he told him the name of the person they were looking for, the security had called on his other companions who had also come close to them.

While Lenin was speaking to the security guards, he noticed a policewoman, who was talking to someone on her mobile phone, exiting from one of the houses close to where they were. After few minutes, another three policemen, whom he knew later as Senior Police Officer (SPO4) Hernando Sarmiento, Police Officer (PO3) Arnold Barrion at Police Officer (PO1) Edward Bengbeng, arrived in a police patrol car. The three are all attached to the Sindalan Police Station.

During this time, three of Lenin’s companions, who were inside the car they were riding, were asked to alight from their vehicle. According to Lenin, the policemen holding them had also called for police reinforcements from the Provincial Public Safety Office (formerly Regional Mobile Group – RMG) under the command of Supt. Madzgani Mukaram.

When the group of Supt. Madzgani Mukaram arrived, Lenin and his four companions, Jerry Simbulan, Daniel Joseph Navarro, Rodwin Tala and Jose Llones Gomez were already lying faced to the ground. Supt. Mukaram, according to Lenin, started assaulting and kicking him after coming close to him. His companions were also assaulted.

Lenin said that he and his four other companions were taken to separate vehicles. Although his movement had already been restrained as he was already inside the police car, he was continuously assaulted and beaten with a stick. All of them were taken to the Provincial Police Office (PPO). Inside the police headquarters, all of them were blind folded and had suffered various forms of tortured.

Inside the headquarters, Lenin said that the police assaulted him and beat him with a gun, burnt his body and his neck with lit cigarettes, applied dry suffocation on him by covering his face with cellophane, he was also kicked in the genitals. While he was blindfolded, the policemen had on purpose let him hear the squeezing and clicking sound of a revolver beside his ear. They were also deprived of food from the time of their arrest until August 4 in the afternoon. 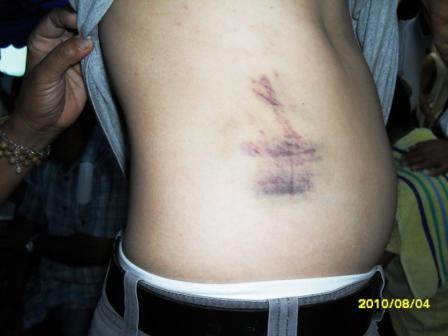 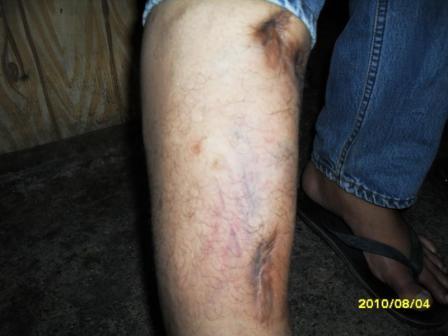 Lenin dared Supt. Mukaram saying: “Fine, kill us all, you already got hold of our family but this is what you are still doing to us?” This was after Supt. Mukaram made threats of harming Lenin’s family if he refused to cooperate with the police. Supt. Mukaram nevertheless carried on threatening them that more of the victims’ companions would disappear and that he had already asked his men to work on it.

When Lenin asked Supt. Mukaram about respecting their rights, he told him: “There are no human rights for us. We will kill each of your contacts in the media and other groups and we just bury them”. Lenin also added that the Supt. Mukaram had also had enough with his sister, Donna Salas Lopez, but did not elaborate for what reasons. Supt. Mukaram told Lenin that to kill his sister would not take long; and that even if he decides to visit the wake of his sister he could not do so because they will make sure he could not get out of jail.

It was only on August 4, at 2pm that the torture of the victims ended after they were all taken to the Provincial Prosecutor’s Office (PPO) in San Fernando, Pampanga Province where they were laid with charges for Illegal Possession of Firearms, Ammunitions and Explosives.

SUGGESTED ACTION:
Please write letters to the authorities listed below requesting them to investigate the victims’ allegations of torture over breach of the Anti-Torture Act of 2009. The police official and others involved in arbitrarily arresting, torturing, detaining and threatening the victims should also be subjected to a credible investigation.

The AHRC has also written letters to the Special Rapporteurs on torture and other cruel, inhuman or degrading treatment or punishment.

« PAKISTAN: A senior journalist was abducted, tortured and kept incommunicado by the intelligence agencies

SRI LANKA: The fatal night that changed the phantom democracy into a complete dictatorship  »