The Asian Human Rights Commission (AHRC) has received updated information regarding student activists who have been arrested in Thailand. According to Thai Lawyers for Human Rights (TLHR), only one day before the referendum, the Thai authorities arrested two pro-democracy activists in Chaiyaphum province, northeastern Thailand, for distributing anti-constitution flyers.

The Provincial Court of Phu Khiao ordered the remand in custody of two student activists for distributing vote-no leaflets in Phu Khiao market, Chaiyaphum, claiming a grave offence had been committed. One of the students ‘Pai’, a core member of the Northeastern New Democracy Movement (NDM) activist group, has refused to bail himself and is on hunger strike now. The other student, Palm, has been bailed out. 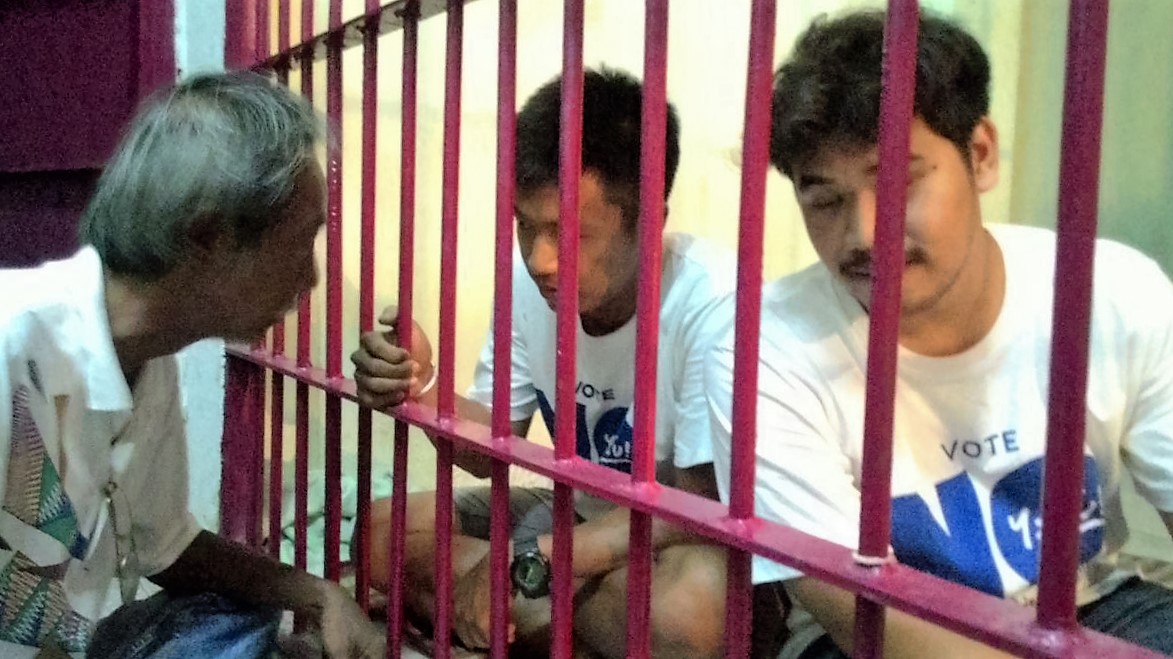 On 8 August 2016, at 12:20 p.m., in the pretrial hearing room of the Provincial Court of Phu Khiao, police officials from the Phu Khiao Police Station, Chaiyaphum province, had filed a request for remand in custody of Mr. Jatupat Boonphatthararaksa, aka “Pai”, a student of Khon Kaen University and a member of the New Democracy Movement (NDM) and Mr. Wasin Prommanee, aka “Palm”, a student of Suranari University. The two suspects were arrested while distributing leaflets relating to the referendum in a market in Phu Khiao municipality in the late afternoon of 6 August 2016. They were initially held in custody at the Phu Khiao Police Station, and refused to bail themselves.

According to the police’s motion of pre-trial request, it was described that the arrest was made on 6 August 2016 at around 17:00, after police from the Phu Khiao Police Station, police investigators, and administrative officials of the Phu Khiao District had been informed that some individuals were distributing leaflets urging people to reject the Draft Constitution on Satharana Road, Ratbamrung, Moo 1, Tambon Phak Pang, Phu Khiao District, Chaiyaphum province. At the crime scene, they found the alleged offender no. 1 and the alleged offender no.2 distributing the leaflets and other documents on the road. The officials identified themselves and then asked to conduct the search which had led them to the discovery and seizure of incriminating evidence including (1) 128 copies of the vote-no leaflets, (2) 16 copies of the statement by the Nitirat Group, and (3) one copy of a booklet explaining the reasons against the Draft Constitution. The alleged offenders no.1 and 2 were then arrested with the evidence and both had denied the charges.

According to the inquiry officials, the alleged offenders were accused of committing an offence against the Constitutional Referendum Act’s Section 61 (1) and Section 61 paragraph 2, punishable by not more than ten years of imprisonment, a fine of 200,000 Baht and against the Announcement of the Council for Democratic Reform under Constitutional Monarchy (CDRM) no. 25 punishable by not more than six months of imprisonment or a fine of not more than 1,000 baht or both.

The inquiry officials claimed the investigation was not done and they needed more time to examine four more witnesses and to wait for the criminal background check of the suspects, so the remand in custody should not be granted. In addition, it was indicated in the remand request that since the offences carry a high penalty rate, there is a fear of flight and the tempering with evidence or the commission of other harmful acts. The alleged offender no. 1 (Jatupat) also had a pending arrest warrant by the Muang Khon Kaen Police Station for his previous violation of the Head of the NCPO Order, and should the Court grant him a temporary release, the police should be notified.

Both Jatupat and Wasin pleaded against the remand, claiming the information from the four witnesses had no major bearing on the investigation and the background check could have been done by the officials without having them remanded. Also, they have no reason to flee since they both need to go to school. As to the outstanding case at the Muang Khon Kaen Police Station as claimed by the inquiry officials, they explained that the case has not been indicted and it is a politically motivated case as well.

Based on the remand request of the inquiry officials, the Court has found the two alleged offenders had committed a grave offence carrying not more than three years of imprisonment and therefore granted the remand in custody as requested for 12 days from 8-19 August 2016.

After the remand was granted, Wasin asked to apply for bail, while Jatupat refused to do so. The bail bond worth 150,000 baht was placed with the Court as sureties to have Wasin released. Meanwhile, Mr. Wiboon Boonphatthararaksa, father of Jatupat and attorney for both Jatupat and Wasin, revealed that prior to his arriving at the Court this morning, the police had further interrogated the two suspects and pressed more charges against them for refusing to have their fingerprints taken. They refused to have their fingerprints taken claiming they had done nothing wrong. Both also had refused to bail themselves while in police custody and had started a hunger strike since 10:00 a.m. on August 7. Jatupat asked Wasin to bail himself out in order to resume his study, while he himself insisted on not applying for bail and would continue to be on hunger strike while in custody at the prison. He wants to affirm his innocence and wants to test the integrity of the law enforcement process and the justice process.

The offence against the Constitutional Referendum Act’s Section 61(1) relates to an act to cause disturbance to the referendum voting and against Section 61, paragraph 2 having transmitted a text, or an image, or sound through the print media, or radio, or television, or electronic media, or other channels, which are inconsistent with the truth or are violent, aggressive, rude, inciting or threatening and aimed at preventing a voter from casting a ballot or vote in any direction shall be considered as disrupting the referendum.

The same documents had previously landed the NDM activists in jail in two other occasions already, including the distribution of the documents at Kan Keha Bang Pli Community, Samut Prakan, and the search of a pickup truck in Ban Pong District, Ratchaburi. Cases have been reported against other students for organizing the activity “speak for freedom, the Constitution and the E-san people?” in Khon Kaen. The NDM members have all denied the charges and insisted that their documents are neither distorted nor rude.

The following are the names of the arrested activists:
1. Mr. Jatupat Boonphatthararaksa, 25 years, currently detained at the District Prison of Phu Khiao
2. Mr.Wasin Prommanee, 20 years, on temporary release with conditions imposed by the Phu Khiao Provincial Court

And, the following are the details of the charges:

Anyone who publishes text, images or sound, through either newspaper, radio, television, electronic media or other channels, that is either untruthful, harsh, offensive, rude, inciting or threatening, with the intention that voters will either not exercise their right to vote, or vote in a certain way, or not vote, shall be considered as a person causing confusion to affect orderliness of voting.

Any person commits the act to cause confusion to affect orderliness of voting shall be
punished with imprisonment of not exceeding ten years and a fine of up to 200,000 Baht.
The Court may order to revoke his/her right to vote of not exceeding five years.
If the offences are committed by a group of five persons or more, each person shall be punished with imprisonment of one to ten years, a fine from 20,000 to 200,000 baht and a10-year revocation of voting right by court.

2. THE ANNOUNCEMENT OF THE COUNCIL FOR DEMOCRATIC REFORM (CDR) NO. 25 ON THE PROCEDURE IN THE CRIMINAL JUSTICE SYSTEM DECLAREDON 29 SEPTEMBER 2006

Any person who is accused of committing criminal offences has a duty to give fingerprints or footprints in criminal proceedings as ordered by prosecutors, judges or police investigators. Whoever violates such order shall be punished with imprisonment of not exceeding 6 months and/or fine of not exceeding 1,000 Baht for disobeying the order of the officials by refusing to give their fingerprints.

Please write letters to the authorities below, asking them to immediately withdraw the case and end any ongoing investigation into the two student activists.

Please note that the Asian Human Rights Commission is writing a separate letter to the UN Special Rapporteur on the promotion and protection of the right to freedom of opinion expression and seeking his urgent intervention into this matter.

I am writing to voice my deep concern regarding the Thai authorities’ arrest of two pro-democracy activists in Chaiyaphum province, northeastern Thailand, for distributing anti-constitution flyers. All of them are charged with violating Section 61 of the Constitutional Referendum Act B.E. 2559 (2016) and the Announcement of the Council for Democratic Reform under Constitutional Monarchy (CDRM) no. 25/2549 (2006). They are subject to the Phu Khiao jurisdiction and, if found guilty, could face up to ten years of imprisonment, a fine of 200,000 Baht, and also have their right to vote revoked by the Court.

With regards to the National Council for Peace and Order (NCPO) s’ plan, the date 7 August 2016 was scheduled for the constitutional referendum by the Thai Military government. Before the date, the New Democracy Movement (NDM), a group of student activists and other activists, formed at the first anniversary of the coup d’état in late June 2015, started their campaign to encourage people to cast their votes to reject the draft constitution as they are of the opinion that the draft is undemocratic.

In using the Order of the NCPO no.3/2015 and the Constitutional Referendum Act B.E. 2559 (2016), the authorities have restricted anti-draft groups from expressing their views. The NCPO no.3/2015’s original intent was to prosecute actions intended to undermine or destroy peace and national security while the Constitutional Referendum Act B.E. 2559 (2016)’s intent was to ensure “Free and Fair” concept in the referendum process. However, I wish to point out that, both legislations are being used to prevent the NDM and other pro-democracy groups from running campaigns from distributing anti-constitution flyers. As a result, according to a Thai lawyer for Human Rights (TLHR), as of 5 August 2016, 195 people have been prosecuted for publicly opposing the draft constitution.

In the case of Mr. Jatupat Boonphatthararaksa and Mr. Wasin Prommanee, I wish to note that they are an example of pro-democracy activists in Thailand who continue to struggle with rights to freedom of expression. After distributing leaflets to the general public, the two individuals were bought to the Phu Khiao District Police Station. Then, as the subjects of an unfair trial process, they were taken into custody and charged with violating the Constitutional Referendum Act’s Section 61 and the Announcement of the Council for Democratic Reform (CDR) No.25/2549 (2006).

1. The Commander of Royal Thai Police to immediately and unconditionally drop all charges against the two student activists who were trying to campaign for the referendum on the draft constitution;

2. The Commissioner-General of Royal Thai Police and the Attorney General of Office of Attorney General to guarantee in all circumstances the physical and psychological integrity of the two student activists and unconditionally drop all charges against them;

3. The Chairman of the National Human Rights Commission to urge the Royal Thai Police and the National Council for Peace and Order (NCPO) to take prompt action to protect the two student activists who were trying to campaign for the referendum on the draft constitution.

PHILIPPINES: Human rights defender killed in Bataan due to her resistance to open coal storage »