Home / News / INDONESIA: Impunity for military officer in Aceh who threatened to kill a journalist for reporting on illegal logging

INDONESIA: Impunity for military officer in Aceh who threatened to kill a journalist for reporting on illegal logging

The Asian Human Rights Commission (AHRC) has received information that an Aceh-based journalist was beaten and threatened by a military officer. The journalist had published an article – against the request of the officer – about illegal logging in the area, and its possible involvement with the Alapan District Police Station (Polres), and the Alapan Military Sub-District Command (Koramil). 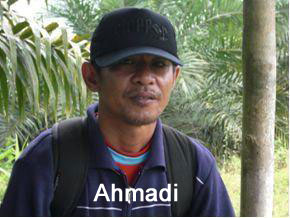 On 19 May 2010 Harian Aceh journalist Mr. Ahmadi (pictured) and News Investigasi Medan journalist Mr. Aziz met to investigate a flood that had taken place in the Alapan district some days before. During their journey they met people cutting up logs. The journalists asked the workers about the owner of the logs and were told that they belonged to the Alapan District Police Station and the Alapan Military Sub-District Command. Mr. Ahmadi and Mr. Aziz took pictures of the logs. (Photo: Mr. Ahmadi, Source: Harian Aceh)

On their return Ahmadi and Aziz tried to contact First Lieutenant (Lettu) Faisal Amin from the Simeuleu Military District Command (Kodim) to enquire further. They report that Lieutenant Amin asked them not to publish any information about the logging business. Despite this the paper Ahmadi worked for, Harian Aceh published the story on 21 May 2010.

On the day the article was published Ahmadi and Aziz were summoned to meet with Amin at 9:30am at a shooting range in a Military District Command field. The two journalists were picked up and taken to the location by Kardiar, a military officer of that command unit, yet when they arrived at the meeting point Amin asked Aziz to leave, allegedly saying that he had “no business’ with Aziz, just with Ahmadi.

According to the victim’s testimony and reports by local media, Ahmadi then asked Amin why he had been called to meet him, but instead of replying, Amin took Ahmadi’s cell phone and laptop and threw them to the ground. When Ahmadi tried to get his cell phone Amin took his gun and started to shoot at targets in the range, and allegedly shouted ‘You liar…You have humiliated me three times…. I’ve told you not to publish it but you insisted.”

He then reportedly elbowed Ahmadi to the face and threatened to kill his family if he didn’t change or retract the content of the article. We are told that Amin then released another shot at the target objects on the field and asked Ahmadi to take off his clothes, which he refused to do. When the journalist was allowed to leave the shooting field at 1pm he went to the Simeuleu District police station to file a complaint of intimidation and assault at the army command. After this he went to hospital to get a medical report, since his face was swollen and his chest was bruised.

However since then, insufficient legal action has been taken, partly due to the framework of Indonesian law, as explained below. We are told that the Head of the Public Relations section of the Iskandar Muda Military Area Command, (Kodam) Yuli Maroko has admitted that the beating was conducted by a military officer, and has said that the case is being investigated by the Meulaboh Military Police (POM).

Ahmadi reports that the Head of Military District Command 0115 Simeuleu Aceh, Wirana Prasetya Budi, apologised to him, and that the Wirana Prasetya sent a staff member from District Command 0115 Simeuleu Aceh to his house for his and his family’s protection. Yet unlike in many countries, this case cannot be tried in a civil court.

Even though Indonesian national law, specifically, Article 39 of Law No. 34/2004 regarding Indonesian National Military (PDF), prohibits military officers from conducting any commercial businesses, several incidents have shown that this practice exists. Human rights violations often occur when armed forces protect their own commercial interests that conflict with local entitlements and interests. See our appeal, Dozens are injured in police attacks during protests against alleged land grabbing UAC-171-2009 for another example, and more information.

Currently, members of the Indonesian military who commit human rights violations against civilians are not held accountable to any criminal procedure or courts. Only military internal mechanisms apply, which often give lenient punishments, if any. The government of Indonesia has been repeatedly asked to review laws to allow civilian courts to hold military criminals accountable.

This problem is one reason for the scheduled revision of the current Indonesian National Military Law. The Indonesian House of Representatives (DPR) and government were in the process of drafting a revision of the law, but since no agreement was reached between the institutions, the drafting process has been halted. The DPR continues to insist that alleged military criminals be brought before a civilian court while the Minister of Defence – on behalf of the government – holds that military officers should only be accountable to military courts, regardless of the violations that were committed.

Please send your letters to the authorities listed below to ensure that Mr. Ahmadi receives proper compensation and that the investigation against the perpetrator is conducted. Please also call for a revision to the law that does not allow military criminals to be tried in a civilian court.

INDONESIA: Impunity for military officer in Aceh who threatened to kill a journalist for reporting on illegal logging

I am writing to voice my deep concern regarding the threat and beating allegedly conducted by First Lieutenant (Lettu) Faisal Amin against Mr. Ahmadi, who works as journalist for local newspaper Harian Aceh. According to the information I have received, on May 21 2010, Mr. Ahmadi was beaten on his face and chest and threatened with death by First Lieutenant Faisal Amin, in retaliation for his publishing of an article about illegal logging. The article alleged the involvement of officers from Alapan Police Station and Alapan Military Rayon Commando (Koramil) in local logging activities.

I understand that the day before the article was published, First Lieutenant Faisal Amin asked Mr. Ahmadi not to go ahead with it. Harian Aceh published the item on May 21, 2010.

I strongly condemn the violence conducted by First Lieutenant Faisal Amin. Such an assault is prohibited under the Convention against Torture and Other Cruel, Inhuman, or Degrading Treatment or Punishment (CAT) to which Indonesia has been a signatory since 1998; it is also in direct violation of the freedom of press.

Freedom of the press is part of the freedom of expression guaranteed by Article 19 of International Covenant on Civil and Political Rights (ICCPR) of which Indonesia is signatory, and Article 28F of the 1945 Constitution. In national law, Law No. 40/1999 states that freedom of the press is “characteristic of people’s sovereignty and is a very important element of fostering democratic society.” Article 4 paragraph (1) of the law states that “freedom of press is guaranteed as citizens’ right.”

I am aware that First Lieutenant Faisal Amin is under the POM’s investigation and that this case has been followed up by the Meulaboh Military Police (POM). I was informed that Commandant of Kodim 0115 Simeuleu Aceh, Wirana Prasetya Budi, has apologised to Mr. Ahmadi for the assault by an officer, that he sent another officer to ensure the protection of Mr. Ahmadi and his family. I sincerely appreciate the goodwill of Kodim 0115 Simeuleu Aceh and their efforts to apologise to and provide protection for Mr. Ahmadi and his family.

However, I urge you to remember that due process is still vital; this case should be processed and an investigation must be conducted appropriately and transparently. It is also important to note that for the rights violation he has faced, Mr. Ahmadi deserves appropriate monetary compensation.

I also call for the revitalization of military courts, and for reform within military institutions in Indonesia so that there is accountability and transparency among officers. I am informed that under national law, specifically, Law No. 31/1997 regarding the Military Court, Indonesian military officers who commit crimes are brought before the military court rather than a civil court, even if the crime was not conducted in their official capacity. This essentially places anyone in such a uniform aside from civil law and accountability. Military officers cannot be judged impartially by their own colleagues. This is no route to justice.

I support the House of Representative’s draft on the Military Court Bill, which calls for military officers to be brought to civilian courts if they conduct crimes that are not part of their official duties.

I am looking forward for your swift action in this case.

« PAKISTAN: BBC Pakistan news is censored by the Pakistani authorities, on the instructions of the Army

NEPAL: A man remains missing after his abduction by the Young Communist League »