Home / News / PHILIPPINES: Torture of a 17-year-old boy at the Women and Children Desk at a police station

PHILIPPINES: Torture of a 17-year-old boy at the Women and Children Desk at a police station

The Asian Human Rights Commission (AHRC) writes to inform you that a 17-year-old boy was tortured on December 11, 2010 in the custody of the police. The victim, who revealed to his parents his ordeal only on February 26, 2011 due to trauma, was tortured at a police quarter and inside the Women and Children’s Desk of the police. 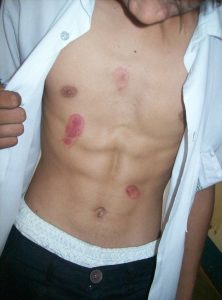 On the evening of December 10, 2010, John Paul Nerio, (17 years old at the time of incident), was arrested after he was mistakenly accused of being involved in a fight at a bar. The policemen who arrested him, are attached to the Special Weapons and Tactics (SWAT) of the Philippine National Police (PNP) in Kidapawan City, took him to their police quarter where he was tortured.

After he was tortured at that location they delivered the victim to the Women and Children’s Desk (WCD) where they reported the victim’s arrest, supposedly for violating the city’s curfew. Here, the victim was again physically assaulted and tortured in front of the policewoman recording his case and in open view of onlookers some of whom were civilians.

When interviewed by the AHRC, John Paul gave details of his ordeal in Cebuano, one of the regional languages in the country. His testimony can be heard here:

John Paul also wrote his testimony in Cebuano about his ordeal. His father, Pablito Nerio, who immediately sought assistance from local police after learning about the torture of his son also wrote in his testimony how the police ignored their complaint.

A discussion about the difficulty of torture victims and their families to have their complaints investigated promptly and adequately can also be heard here.

The AHRC has already written appeal letters to the Public Attorney’s Office (PAO) and the Commission on Human Rights (CHR) in Manila respectively requesting their immediate intervention. However, apart from referring the case to their regional offices, no substantial progress has taken place.

In her letter to a field officer, Mrs. Persida Rueda-Acosta, chief of the PAO, has endorsed the AHRC’s appeal to their lawyer, Orlando Dano in Kidapawan City. She gave him ten days from the date of the endorsement (15 March), to submit a report upon receipt of her letter.

Also, in an email receive by the AHRC from Mr. Aki Nano, a CHR staff attached to the Office of the Chairperson, following a telephone inquiry, said that: “as per our record, we did received last 15 March the fax letter of AHRC re the case of John Paul Nerio. The matter has been referred to our Field Operations Office for the appropriate action of CHR Regional Office in region 12 where the incident took place.”

While the AHRC appreciates the action taken so far by the PAO and CHR; however, it has reservations as to whether the investigation would commence promptly and that it would be able to complete their investigation in the period required by the Anti-Torture Act of 2009.

As of the writing of this Appeal when the AHRC contacted the victim’s family about the matter, none of the field staff from either the PAO or CHR, who have been tasked to investigate the complaint, have ever contacted them about their case.

SUGGESTED ACTION:
Please write letters to the concerned authorities below requesting for their intervention. Please be informed that the AHRC is also writing a separate letter to the Special Rapporteur on torture and other cruel, inhuman or degrading treatment or punishment.

Name of the victim: John Paul Nerio (he was 17 years old when the incident happened), aresident of Barangay Manongol, Kidapawan City. He is a student of the Kidapawan National High School (KNHS).
Alleged perpetrators:
1. Police Officer 1 (PO1) Mapandi
2. P02 Malaluan
Police 1 & 2 are members of the Special Weapon and Tactics (SWAT). They were theones who took the victim to the Women and Children‘s Desk (WCD) of the Kidapawan City Police Office (KCPO).
3. P02 Aileen Pacheca Jauod. She was the duty police officer at the WCD of the KCPO when the victim was assaulted in her presence.
Date and time of the incident: On December 10 evening to 11, 2010 at 3 a.m. at theheadquarters of the SWAT and at the Women and Children‘s Desk (WCD) of theKidapawan City Police Office (KCPO).

The Asian Human Rights Commission (AHRC) is writing to draw your attention to the case of John Paul Nerio of Kidapawan City, who was tortured in the custody of police officers on December 11, 2010. When the incident happened, he was 17 years-of–age. Following theincident he deliberately hid the details of his ordeal from his parents due to fear and trauma.

Details of the case

On the evening of December 10, 2010, John Paul was on his way to a bar in downtown Kidapawan City to meet a friend. There was a fight at the bar where he was supposed to see his friend which had just happened. He saw people, including those involved in thefight, running away from the bar to avoid trouble.

Upon seeing this scene, John Paul immediately hid behind a bush to avoid drawing attention to himself. He was aware that once he is seen, he would be mistakenly suspected of involvement in the fight; thus, by hiding behind the bush he could get away from being accused of involvement.

However, when about five police officers, all of them are attached to the Special Weapons and Tactics (SWAT), arrived at the scene of the fight, they had seen John Paul hiding behind the bush. They threw rocks at him for him to come out in open. They allegedly forcibly dragged him from where he was hiding towards the police car; repeatedly hit him in view of the onlookers with their guns in his chest. The policemen demanded from him to disclose the identities of who were ‘his supposed accomplices’ in the fight.

John Paul told the policemen arresting him that he was innocent. He also asked from them reasons as to why they were arresting him, what was his wrongdoing and why the need to torture him. However, the policemen ignored him. They told him that he had violated thecity’s curfew for minors, but did not elaborate further.

After taking John Paul into custody they took him to, according to what the victim himself described, as a ‘hideout or headquarter’. Here they threatened him that if he refused to cooperate with the police, they could torture and do whatever they want to him because no one will see them. They forced the boy to clean the dirty and stinky toilet at the policequarters. They threatened and intimidated him while he was in their custody before taking him to the Women and Children‘s Desk (WCD) of the Kidapawan City Police Office.

Once they arrived at the WCD, the two police officers, P01 Mapandi and P02 Malaluan, who took custody of the victim at the time of his arrest and turned him over to the WCD, had his arrest recorded ‘for violation of curfew for minors’. However, while he was at theWCD, there were unnamed policemen, who were attached to the same police station, who took turns in assaulting him in open view of the policewoman who was recording his case. The policewoman, P02 Aileen Pacheca Jauod, did nothing to stop or prevent her colleagues from assaulting the boy but rather continued to watch passively while they continued to do so.

What P02 Jauod only did was to take the boy away from the policemen assaulting him. P02 Jauod also did not put on record the victim’s allegation of torture against the arresting policemen; of what had happened to him while he was in their custody at their quarter or that the policemen had threatened and intimidated him. She also did not contact thevictim’s parents as is legally required for arrested minors. John Paul told P02 Jauod that he had been tortured and requested that he be taken to hospital to be examined and treated. However, his request was ignored.

Every time the boy requested and mentioned his need for treatment of his injuries and examination, P02 Jauod tried to change the topic of their discussion to deliberately deviate his attention to something else. As a result John Paul was never examined. What P02 Jauod did before letting John Paul go from their custody was to asked him: “kaya pa nimo? (Can you still bear the pain?). The victim had no choice but to agree.

It was not until February 26, 2011 that John Paul informed his parents about what had happened to him. The boy, following the incident, had experienced emotional and psychological trauma–like fear in the presence of policemen. He was never afforded any form of treatment and counseling. John Paul had already stopped from going to school because of fear, not only from policemen whom he would came across at anytime; but also of what they are capable of doing once his family became involved.

As of today, John Paul’s complaint has not been thoroughly investigated. The details regarding the torture that he had experienced cannot even be found in police records due to deliberate attempts to cover the matter up.

It is disappointing that the Women and Children‘s Desk of the police station, the desk that is supposedly responsible to look after the welfare of children, became instrumental in covering-up an act of torture. The behaviour of policewoman, P02 Jauod, who tolerated thetorture and assault of the victim in her presence, is not only unacceptable but also incomprehensible.

I therefore urge you to immediately afford the victim and his family the assistance, as required by section 11 of the Anti-Torture Act of 2009, in the process of having their complaint investigated and of filing a complaint. I also request your office to provide thevictim needed assistance to ensure his recovery.

« SRI LANKA: Police produced a man before court with fabricated charges after torture