INDIA: Two persons tortured in Kerala for no reason

The Asian Human Rights Commission (AHRC) has received information that the Kerala State Police has illegally arrested and tortured two persons on 11 February 2011 in Anthikadu Police Station of Thrissur district. According to the information received by the AHRC from Nervazhi, a human rights organisation based in Kerala, the police took into custody Mr. Sanal and Mr. Jenson from a place near the victims’ house. It is reported that the police tortured the victims inside the police vehicle as well as at the police station. It is however not known why the police arrested the victims. Both victims allege that they have suffered severe injuries due to torture. Of the two, Sanal is from the Scheduled Caste community and both victims are from poor families of the locality and are electricians by profession.

The following is the statement provided by the victims, detailing the incident. 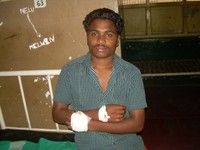 We are electricians and are from Peringotukara in Thrissur district. Sanal is from the Pulaya community which is a Scheduled Caste in Kerala. It is our practice that after we return home from work to spend time until about 9pm in a open compound near the Thruprayar main road talking with friends. This land belongs to a private individual and we used to sit here daily with friends talking and relaxing. There are also others who use the same compound for similar purposes every day.

On 11 February 2011, we, Sanal and Jenson, were talking sitting in this compound. At about 8.30pm four police officers from the nearby Anthikadu Police Station approached us. A few persons who had gathered towards the south side of the compound left the compound when they saw the police approaching them. Since we were not afraid, we continued our talk and as the police officers approached us, we stood up. The police did not attempt to stop those who left the compound, but came and held us from behind as if to prevent us from running away. We were confused and even before we could ask why the officers were holding us, a police officer who was holding me (Sanal) turned around and kicked me on my chest. I later came to know that this officer’s name is Fizal.

The officers refused to give us water or food, despite our requests. At about 1.30am, the Circle Inspector of Police, Mr. Raju came to the station. The officer opened the cell and dragged me (Sanal) out of the cell and pushed me into the office of the Sub-Inspector of Police. The officer then asked who else were with me at the time the police took us into custody. I informed him that there were none and that this was the same question the other police officers were asking us. Hearing this, the officer kicked me on my chest. Then the officer held me down with my head down and then started punching me on my back. After a while, I collapsed on the ground. I fell with my face down. The officer then kicked me on my neck several times. It was extremely painful. Then the other police officers lifted me up from the floor and one police officer held my head down by force. The Circle Inspector then elbowed me on my spine several times. The pain was so intense as if, wasps are stinging me, each time the officer elbowed me. I fell down. Then another police officer stared beating me on my foot with a police baton. Soon I fainted.

When I gained consciousness both Jenson and me were inside the police lockup. Then police officers came and asked us to jump inside the police cell keeping our hands held up. We could not comply since we were hurt severely.

On the next day morning, Police Sub-Inspector Mr. Joju came into the police station and asked me (Sanal) to come close to the cell door. Then the officer asked me to put my hands outside the cell through the rails. I complied. Then the officer held my left palm with such force that it started paining. I informed the officer that my palm is paining, as it has been injured the previous night. The Circle Inspector then came and held a pen on the wound and started poking the wound with the pen. I cried out loud with pain. The officer shouted at us and asked us to inform him who else were with us at the time we were taken into custody. I informed the officer that there was nobody with us. I said to the officer at that time that it is better for him to murder us than punishing us like this.

It started to bleed from my palm. Then the Circle Inspector held a pen each between my fingers and started squeezing my palm. I started feeling that my bones will soon crack. I cried out aloud. Then the officer held my fingers between the iron rods in the cell door and bend them with force. At that time, I cried out aloud and pleaded with the officer to murder me instead. The officer then shouted to give him the names of those whom he claimed were with us and held back my thumb by force. I once again cried out. Jenson is a witness to all this. At about 9am three of our friends, Mr. Deepak, Mr. Aji Francis and Mr. Abdul Khadar came to the police station and brought us food. The police still did not inform us what they were suspecting us for or why they were torturing us. Till 8.30pm the police kept us in the cell and did not hurt us any further. Then before 9pm, the police took us to the residence of the local Magistrate. The Magistrate released us on bail on a condition that we must report at the police station on every Monday, Wednesday and Saturday till March 26. Then we returned home.

On the next day I vomited blood and collapsed. My family hospitalised me on the same day at about 10am. I have no place in my body that does not pain. Jenson also was hospitalised since he was also hurt. The police officers who tortured us must be punished. For that there must be a proper investigation.

It is common for the local police in Kerala, India to take persons into custody on mere suspicion. Nervazhi informs the AHRC that the police might have taken the victims into custody thinking that they were either involved in a theft or planning for it. It is usual practice for the police to torture persons in order to extract information from them.

It is unfortunate that in this case when the victims were produced before the Magistrate they were not properly advised or questioned by the police as to whether they have any complaints against the police. It is mandatory under the Criminal Procedure Code, 1974 for the judicial officer to record in writing whether the persons produced before the Magistrate have any complaints against the police and should they have any, and if the complaints reveal incidents of torture, to get the persons examined by a medical officer. Often the Magistrates ignore their statutory duty to the detriment of the victims, as it has happened in this case.

SUGGESTED ACTIONS:
Please send letters to the authorities cited below expressing your concern in this case and also requiring the authorities to initiate a proper investigation in the case. The first step is to record the statement of the victims by a judicial officer. The accused police officers must be suspended from service till the investigation is over and if the investigation leads into a prosecution, the prosecution is over. The AHRC is writing a separate letter to the UN Special Rapporteur on torture and other cruel, inhuman or degrading treatment or punishment seeking an intervention in this case.

INDIA: Police officers who tortured two innocent persons in Kerala must be punished

I am writing to express my concern about the allegations of torture involving the police officers mentioned above against the victims, Sanal and Jenson at Anthikkadu Police Station, Thrissur district, Kerala state.

While it is still unknown why the police detained and tortured the victims, it is clear from the medical records that both victims have suffered injuries while in police custody. It is however unfortunate that the local Magistrate before whom the victims were produced did not record their statements or order a medical check up.

I am informed that Sanal has suffered serious injuries all over his body, his palms in particular, from the torture. I am also informed that both victims had suffered other injuries all over their body and had to be hospitalised on 13 February to receive treatment. I am concerned to know that in addition to torturing the victims, the police did not follow any of the procedures prescribed under law while arresting the victims in the case. The police have failed to inform the victims or their relatives why they were taken into custody or where they would be detained at the time of arrest.

According to the information provided to me, the police tortured the victims right at the time of arrest, then inside the police vehicle on their way to the police station and at the police station. I am informed that the police not only kicked and punched the victims, but also held articles like pens in between one of the victim’s fingers and squeezed it with force that he suffered serious injuries in his palm and started bleeding profusely from the injuries.

I therefore request you to intervene in the case and ensure the following:
1. A judicial magistrate without any further delay should record the statements of the victims;
2. If the statements reveal allegations of torture, the officers involved in the incident must be suspended from service until an investigation is undertaken into the incident;
3. The officers must be prosecuted according to the law;
4. The victims must be paid interim compensation.

« PAKISTAN: A couple is missing after their arrest by policemen – the 70-year-old father of the bride is demanding a girl from the groom’s family in compensation