The Asian Human Rights Commission (AHRC) condemns the latest imprisonment of an Internet user in Thailand for posting online supposedly offensive images to the country’s royal family. We are bringing you details of the case and urge you to protest strongly against this use of draconian laws, old and new, to attempt to stifle free expression. 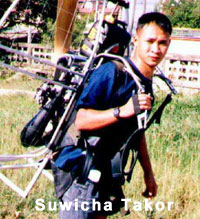 On 3 April 2009 the Criminal Court in Bangkok sentenced 34-year-old Suwicha Takor to 10 years’ imprisonment for posting images on the Internet in 2008 that were allegedly offensive to members of the royal family, including the king and the crown prince. He was convicted of lese-majesty and also with having wrongfully used a computer under a draconian computer crime law that was introduced through a military dictatorship’s legislature in 2007. He was convicted on two charges carrying 10 years’ imprisonment but the sentence was halved because he pleaded guilty.

The police arrested Suwicha on 14 January 2009 at his home area of Nakhon Phanom in the northeast of Thailand and took him by air to Bangkok. He was kept in jail since then, as the court twice refused submissions for bail.

Suwicha was working as an engineer for a multinational oil company. After he was arrested he was sacked from his job without severance pay. Aside from his three children, his wife and father had also depended upon his income for their survival.

Suwicha’s imprisonment follows many other recent cases of lese-majesty and charges brought against persons under the highly ambiguous terms of the Computer Crime Act 2007, as part of a general trend away from human rights and democratization in Thailand begun in the time of the former government of Thaksin Shinawatra that has rapidly accelerated since the army coup of 2006 and continued under the present unelected prime minister.

For further information, see recent AHRC statements on the raid of independent news outlet Prachatai and arrest of its director (AHRC-STM-051-2009, AHRC-STM-054-2009), on lese-majesty (AHRC-STM-028-2009), and a statement of the Asian Legal Resource Centre to the UN Human Rights Council on the resurrection of the internal-security state in Thailand (ALRC-CWS-10-04-2009). See also a recent column on UPI Asia on the computer crime law.

For further on human rights issues in Thailand read the 2008 country report of the AHRC.

SUGGESTED ACTION:
Please write to the following persons to protest the imprisonment of Suwicha and the use of draconian laws, including those on lese-majesty and computer use, to attempt to stifle free expression in Thailand.
Please be informed that the AHRC is writing separate letters to the UN Special Rapporteur on freedom of expression and the Southeast Asia office of the UN High Commissioner for Human Rights calling for an immediate action in this case

THAILAND: Demand for release from jail of man sentenced to ten years for lese majesty

I am writing to strongly protest the imprisonment of Suwicha Takor on charges of lese-majesty and computer crimes and to call for his immediate release and the amendment of the criminal law in Thailand so as to cease violating the freedom of expression of the country’s citizens and residents.

It has been widely reported that on 3 April 2009 the Criminal Court in Bangkok sentenced Suwicha to 10 years’ imprisonment for posting images on the Internet in 2008 that were allegedly offensive to members of the royal family. He was convicted of lese-majesty and also with having wrongfully used a computer under the provisions of law listed above. He was convicted on two charges carrying 10 years’ imprisonment but the sentence was halved because he pleaded guilty.

I am also aware that after the police arrested Suwicha on 14 January 2009 at his home area of Nakhon Phanom in the northeast of Thailand and took him by air to Bangkok, he was kept in jail as the court twice refused submissions for bail.

Thailand has become infamous in recent times for the bringing of charges of lese-majesty and charges under the Computer Crime Act 2007 against persons who have done no more than exercise their freedom of expression. Despite the current prime minister’s claims to be concerned for the freedom of expression and human rights in Thailand, the case of Suwicha is yet another example of a trend in the opposite direction. I note that another recent case of special concern is the raid on independent news service Prachatai and arrest of its director, Chiranuch Premchaiporn.

I call for the government of Thailand to take the necessary steps to see Suwicha Takor released from prison without delay. I also call for the dropping of all charges against Chiranuch Premchaiporn. Furthermore, I strongly urge the government of Thailand to demonstrate its prime minister’s stated commitment to human rights and freedom of expression to at once put forward bills to amend the Criminal Code and revoke the Computer Crime Act (which was passed by a legislature of military appointees, not elected representatives of the people of Thailand) so that no further cases of this sort occur in the future and so that the country’s human rights reputation does not continue to slide downwards.

I look forward to your intervention.

« INDIA: The government ignores deaths of forty-three children due to malnutrition in Madhya Pradesh

PAKISTAN: A person has been held in chains since 34 years in a private jail as authorities have ignored his detention »