The Asian Human Rights Commission (AHRC) has received information from the Padang Legal Aid Institute (Lembaga Bantuan Hukum (LBH) Padang) regarding the shooting, torture, and fabrication of charges of two men by the police in West Sumatra, Indonesia. Despite their injuries, the victims have been denied adequate medical treatment as of today. LBH Padang reported that the police have spread false news in the media in order to justify the shootings. 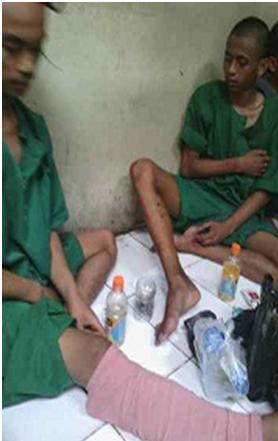 According to LBH Padang, an unidentified officer took Oki Saputra (19) to Padang Selatan Sub-District Police Station at 1.30 pm of 6 February, 2014. Oki was told that the police would like to question him on the motorcycle theft complaint lodged by his family two days earlier. Yet, upon his arrival at the police station, Oki was interrogated on a bag-snatch theft case took place in January 2014. Oki was electrocuted and beaten during the interrogation, but he insisted that he had not committed the crime. (Photo: Andi (left) and Oki (right) were shot by the police despite not posing threat or attempting to escape. Courtesy of LBH Padang)

At 3 p.m. of the same day, Oki was taken to Padang District Police Station for further interrogation. He was forced to confess to be the perpetrator of the bag-snatch and to name his accomplice. The officers beat Oki on his head and chest each time he denied his involvement in the accused crime. Under duress, Oki named one of his co-workers, Andi Mulyadi, to be his accomplice.

The police arrested Andi Mulyadi at the factory where he works in the late afternoon of the same day. His arrest was witnessed by at least 15 people. One of them told LBH Padang that Andi was arrested by four police officers in civilian clothes. None of the officers provide an explanation on the reason why Andi was arrested. Andi was taken to Padang District Police Station for interrogation. As what had happened to Oki, Andi was beaten and forced to confess to be responsible for the bag-snatch.

At 11 p.m., the police took Oki and Andi to two separate places. Oki was taken to a bridge by Taman Siswa, whereas Andi was taken to an empty building at H. Agus Salim Sport Centre. Both men were shot on their legs, despite not posing any threats or not attempting to escape. The police took Oki and Andi to a police hospital at 1 am of 7 February 2014. However, Oki was again taken to an unidentified location where he was shot at least six times in his legs. LBH Padang reported that Oki and Andi had not received adequate medical treatment for their gunshot wounds. One bullet remains in Andi’s leg as of today.

The police told the local media in Padang, such as Padang Ekspres and jaringnews.comthat the shootings were inevitable as Andi and Oki attempted to escape during the arrest. The police also told the media that Andi and Oki were the persons responsible for the bag-snatch theft took place in January 2014, contradicting the information from witnesses that both men were at work when the crime took place.

Andi and Oki are still being detained at Padang District Police Station, putting them at the risks of further reprisals.

Indonesia is a state party to the UN Convention against Torture and other Cruel, Inhuman or Degrading Treatment and Punishment (UN CAT). In spite of its ratification to the convention, torture remains widely practiced by state officials in the country, particularly by police officers. In 2010-2013, LBH Padang documented 63 cases of torture and violence in West Sumatra – one of Indonesia’s 34 provinces – alone. Amongst the 63 cases, only two of them have so far resulted in the punishment of the perpetrators.

The Indonesian constitution and several laws guarantee the right of everyone to be free from torture. The Chief of the Indonesian National Police (INP) have also issued a regulation prohibiting police officers to use torture in any circumstances. Under the Chief of the INP’s regulation No. 1 Year 2009, police officers can use firearms only to stop the action of a criminal suspect which pose imminent threats to life.

These sets of laws and rules, however, have been futile in eliminating the practice of torture in Indonesia. Torture as defined by the UN CAT is yet to be criminalised in the country and there is no effective and independent mechanism to monitor and to bring police officers to justice.

SUGGESTED ACTION:
Please write to the listed authorities below, urging them to investigate the allegation of police torture and violence as well as fabrication of charges in this case. As the victims are currently still at the police custody, please also ask the authorities to relocate them to a more safe detention facility and to provide them with adequate protection and medical treatment.

The AHRC is writing separately to the UN Working Group on Arbitrary Detention as well as the UN Special Rapporteur on Torture and Other Cruel, Inhuman or Degrading Treatment or Punishment, asking for their intervention in this matter.

I am writing to voice my deep concern regarding the case of torture and shooting against Oki Saputra and Andi Mulyadi in Padang, West Sumatra. I have received the information from LBH Padang that both men were arrested on 6 February 2014 on the allegation of their involvement in a bag-snatch theft case took place earlier in January. I am extremely concerned that the Padang police have based their investigation on the theft case without adequate evidence, but merely confession provided by Oki and Andi under torture and intimidation.

I have been informed that Oki was initially interrogated by unidentified officers of Padang Selatan Sub-District Police. During the interrogation, Oki was subjected to beatings and electrocution. However, as Oki was insisting that he has not committed the crime as accused, the police moved him to Padang District Police Station. He was further tortured and, under duress, eventually named one of his co-workers, Andi Mulyadi, to be his accomplice. Andi was arrested on the same day at the factory he works in without giving any resistance. As Oki, Andi was also beaten by officers of Padang District Police who forced him to confess to be the perpetrator of the bag-snatch theft case.

According to LBH Padang, at 11 pm of the same day, Oki and Andi were taken by the police officers to two separate locations. Whereas Oki was taken to a bridge by Taman Siswa, Andi was taken to an empty building at the area of H. Agus Salim Sport Centre. The police shot Oki and Andi in their legs, although none of them posed any threat or attempted to escape. They were taken to a police hospital at 1 am of 7 February 2014. However, Oki was later taken again to an unidentified location where he was shot at least six times in his legs. Oki and Andi had not received adequate medical treatment for their gunshot wounds that one bullet remains in Andi’s leg as of today.

I am aware that Indonesia has been a state party to the UN Convention against Torture and Other Cruel, Inhuman or Degrading Treatment or Punishment (UN CAT) since 1998. I am concerned that, despite the country’s ratification to the convention, torture remains widely practised by state officials, particularly police officers. In 2010-2013, LBH Padang documented 63 cases of torture and violence in West Sumatra – one of Indonesia’s 34 provinces – alone.

I wish to highlight that, under the UN CAT the failure to effectively and independently investigate torture allegations is a violation on the right not to be tortured. I therefore call you to ensure such investigation on this case to take place. The police officers who are responsible for torturing and shooting Oki and Andi should be criminally and adequately punished. Administrative punishment imposed on them should be only complementary to such criminal punishment.

I additionally urge you to ensure that the criminal investigation against Oki and Andi are conducted in accordance with the law and human rights standards. Due to the indication of fabrication of charges against them, I request you to ensure that the investigation of the bag-snatch theft case is transferred to the West Sumatra Regional Police. Oki and Andi who are currently detained at Padang District Police should also be transferred to the Regional Police in order to minimise the risk of them being further tortured and intimidated. I urge you to provide both men with adequate protection as well as medical treatment.

I look forward for your positive and swift response in this matter.

« PHILIPPINES: Rizal Park is not for sale.