BURMA: Father and son jailed and tortured for taking photographs of bombing

The Asian Human Rights Commission (AHRC) has been closely following the case of a father and son both of who have been imprisoned because the latter was arrested while taking photographs of a bombing in Rangoon during April 2010. The authorities have accused the two of intending to send the photographs abroad and of having contact with anti-government exiled groups. The son was tortured and has already been convicted in two cases. A legal advisor for the two accused has alleged that the father was drugged during interrogation. There are also grave concerns for the two men’s current conditions and treatment in prison. 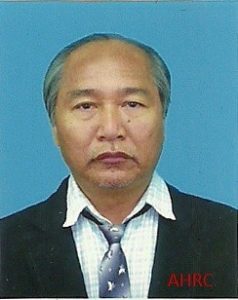 In April 2010 a series of explosions at the annual water festival in Rangoon officially killed 10 and injured 168 people. The AHRC has been closely documenting and working on the case of a young man falsely accused in connection with the bombings, Phyo Wai Aung, and details of the incident and his case are on the campaign page.

At the time of the incident, 20-year-old Sithu Zeya was present taking photographs and video of the festivities and he came to the scene of the blasts and began taking shots of the dead and wounded. Security forces on the scene stopped him and took him into custody where he was tortured over four days to confess that he had planned to send the photographs to an anti-government exile media group and that his father also was involved.
(In this Photo: U Zeya)

The methods of torture allegedly included beating on the soles of the feet, hanging upside down, forcing to squat and stand in stress positions for extended periods and denial of food. The police and immigration officials later repeatedly threatened him that if he did not cooperate in court then they would further torture him and take other actions.

The police arrested Sithu Zeya’s father, U Zeya, the following day. They also detained his mother for a period. A legal advisor for the two men has alleged that the father was drugged during interrogation; however, when the allegations were made in court, they were not put down on the official record although the court is legally required to do this. Details of the allegations are contained in a statement issued by the AHRC: AHRC-STM-011-2011 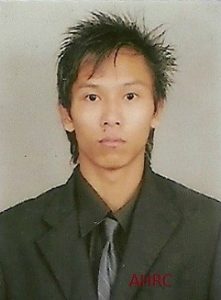 The police held the two in illegal custody, and also did not lodge charges against them in court until a month after the time limit set by law. Aside from this, they did numerous other things in violation of criminal procedure, including failing to complete or incorrectly completing numerous documents needed to proceed with the case, which the lawyer for the defendants pointed out in court. They also had no firm evidence against either of the accused with which to make the cases of contact with unlawful groups and illegal travel abroad and electronic communications.

A court has convicted Sithu Zeya in two cases already and will almost certainly do the same in the remaining charges that are being decided upon now.
(In this Photo: Sithu Zeya)

According to the latest unconfirmed news reports, Sithu Zeya also has since January 5 been held in the notorious dog kennels at the central prison, where jailors take detainees for exceptional inhuman punishment, and is being brutalized daily by wardens.

Further details of the case are in the sample letter below.

The AHRC has released many appeals in recent times speaking to the same types of evidence-less and procedurally flawed cases in the courts of Burma. All these appeals can be accessed by going to the appeals homepage and typing “Burma” or “Myanmar” into the search box: http://www.ahrchk.net/ua/.

The Asian Legal Resource Centre also recently released a special report on rule of law and human rights issues in Burma in the lead up to the Universal Periodic Review process for the country at the United Nations in Geneva. The report and annexe are available on the ALRC website at: http://www.alrc.net/doc/mainfile.php/upr/ (scroll to bottom of page).

Please write to the persons listed below to call for the release of U Zeya and his son. Please note that for the purposes of the letter Burma is referred to by its official name, Myanmar, and Rangoon as Yangon.

Please be informed that the AHRC is writing separate letters to the UN Special Rapporteurs on Myanmar, on torture, and on the independence of judges and lawyers; to the UN Working Group on Arbitrary Detention, and to the regional human rights office for Southeast Asia calling for interventions into this case.

MYANMAR: Father and son jailed and tortured for taking photographs of bombing

I am shocked to hear that both a father and son face long jail terms for no more than the son having taken photographs of the deaths and injuries caused by a series of bomb blasts and urge that they be released without delay.

The cases brought against the two men relate to events on 15 April 2010 when a series of explosions at the annual water festival in Yangon officially killed 10 and injured 168 people. At the time of the incident, Sithu Zeya was taking photographs and video of the festivities and he came to the scene of the blasts and began taking shots of the dead and wounded. Security forces on the scene stopped him at around 3.45pm and took him into custody. The police claim that after they interrogated him they learned that he had planned to send the photographs to the exiled anti-government Democratic Voice of Burma media agency and that his father also was involved in having contact with DVB. His father and mother they subsequently detained, and then charged his father with the same offences as he.

However, according to the information that I have received, there are numerous breaches of law and of basic human rights in this case, including the following:

1. The police arrested Sithu Zeya on the same day as the blasts, 15 April 2010, but they did not open the case against him until May 4, and they did not bring the case before a court until June 14. By law, the police were required to make a First Information Report and only then could they make arrests and search and seize items. Therefore, Sithu Zeya was illegally detained for 19 days. He was also wrongly detained at the Yangon Division Police HQ rather than at the township police station which had jurisdiction over the area where he was arrested, and was not charged in court within 30 days as required by section 167 of the Criminal Procedure Code (CrPC).

2. Sithu Zeya was allegedly tortured for four days while in detention and the confession forced from him was used to bring the charges against him and his father. The torture allegedly included being hit on the soles of the feet, forced to crouch and stand in stress positions for extended periods, being hanged upside down, and being denied food. The police also allegedly threatened him that if he did not confess then they would also arrest and charge his mother. After approximately a month, an immigration department official allegedly came to the prison and again Sithu Zeya was threatened that if he did not cooperate fully then he would be tortured further.

3. A legal advisor for U Zeya has alleged that he was drugged during interrogation. According to the allegations, the man experienced strange physical sensations throughout 20 days in custody for interrogation, including a lack of hunger or drowsiness, infrequent urination, and a willingness to agree with everything that the police put to him. However, when he made the allegations in court, they were not put on the official record.

4. There is no firm evidence against either of the accused with which to convict them, and the police cases were based on confessions extracted through use of torture or alleged drugging. The investigating police repeatedly admitted in court that they do not have evidence but that the facts emerged during investigation.

5. After a person has confessed before a judge the person should be sent in accordance with the Courts Manual paragraph 612(10) to a separate remand section of the prison to await trial and sentencing. However, after the confession Sithu Zeya was sent back to the Yangon Police HQ for further interrogation and torture.

Aside from the above, the police case against the accused was flawed due to the submitting of photocopied documents as evidence, which the courts should have declined to accept, and incorrectly or incompletely filled out records. Although the defence lawyer for Sithu Zeya pointed out this in court, his arguments were rejected on the ground that there was sufficient information in the basic required documentation with which to proceed.

On the basis of these findings there are more than sufficient grounds for the release of the accused and for the establishing of a special investigation into the alleged use of torture and drugs by the police in this case, as well as in other parallel and similar cases, such as the case of Phyo Wai Aung, who has been accused of involvement in the April 15 bombing.

In addition, it must be stated plainly that taking of photographs is not a crime, and that not only a young man but also his father could be imprisoned for no more than the use of a camera speaks to the extent to which the authorities in Myanmar continue to violate basic international norms of human rights in the most reprehensible, flagrant and outrageous manner. Until such cases are no longer brought against persons who have committed no offence and until all persons imprisoned for such non-existent crimes in Myanmar are released from custody, talk of political or social change in the country will remain empty of significance.

I therefore urge both on grounds of domestic law and international human rights standards that Sithu Zeya and his father be released from custody at once. I also take this opportunity to iterate calls that the International Committee of the Red Cross be allowed to resume its visits to prisons and all other detention facilities in Myanmar in accordance with its globally recognized mandate, such that the conditions of imprisonment for persons like Sithu Zeya and U Zeya may at least be monitored routinely.

In this last respect, I note with grave concern new unconfirmed reports that Sithu Zeya has been locked in the dog kennels at Insein Prison since 5 January 2011 and that a warden by the name of U Thein Myint has been daily brutalizing and abusing him. I strongly urge that steps be taken to stop immediately this cruel and inhuman treatment of prisoners in Myanmar jails, and that the ICRC be given prompt and complete access to these facilities, as set out above.

PHILIPPINES: On Gerry Ortega: “Too painfully young for a man to go” »