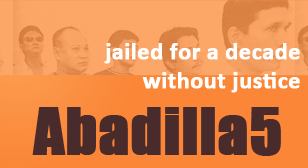 The case People v. Lumanog is about the SC’s decision affirming the conviction and sentence to life imprisonment of five torture victims: Lenido Lumanog, Augusto Santos, Cesar Fortuna, Joel and Rameses de Jesus, in September 2010. They were convicted for the murder of Rolando Abadilla, a police colonel during the Marcos regime, on June 13, 1996.

The case Lejano v. People concerns the acquittal of Freddie Webb, son of a former Philippine Senator, and six others from wealthy family background in the widely publicized Vizconde massacre case. The case is about the gang-rape and murder of a woman, her 19 and 7-year-old daughters on June 30, 1991.

The release of this paper is timely given the announcement by Leila De Lima, secretary of the Department of Justice (DoJ), of her recommendation to President Benigno Aquino III to release the “Abadilla Five” on ‘conditional pardon’. In her statement, De Lima has said ‘conditional pardon’ for them was fitting as “…to me there’s a moral certainty about the lack of reasonable doubt.”

This paper thoroughly examines the People v. Lumanog case on how arbitrarily the arrests were conducted, the illegality in collecting material and confessional evidence, particularly by way of torture; how protracted and long overdue the conclusion of this trial was, and events that preceded the SC’s decision to convict the victims.

The acquittal of the accused in Lejano v. People has already given rise to questions of legal certainty and consistency of judicial decisions of the SC. This question remains unresolved. However, what is clear in Lumanog and Lejano cases is that the former the accused were poor people with no influence in the latter they were wealthy and influential.

These two decisions gives rise to questions on enforcing the fundamental rights to due process and fair trial of any accused, rich or poor, in Philippine courts. These cases demonstrate inequality before the law and the denial of protection of poor people whom the State ought to protect.

This paper is written by Danilo Andres-Reyes, a staff member of the AHRC, who is also responsible for the organisation’s work on the Philippines. He hopes the paper can contribute to cultivating a more substantive analysis as to how fundamental rights are denied systematically by the judicial system expected to safeguard them.

Mr. Reyes would like to thank Professor Simon Young, Associate Professor & Director of the Centre for Comparative and Public Law (CCPL) at the Faculty of Law, University of Hong Kong, for his permission and encouragement to publish this paper, and his kind remark that: “It is a very good paper on a timely topic”.

SRI LANKA: The government treats the law as the enemy  »