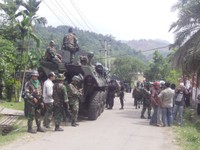 (Hong Kong, Jayapura, October 19, 2011) About 100 TNI soldiers and several members of the mobile brigade of the police (BRIMOB) are reported to have approached closer to the location where the Third Papuan People’s Congress in Jayapura, Papua is currently being held. The organisers fear that the mass violence frequently perpetrated by the armed forces and police may be repeated in this event.

Some journalists are reported to have been blocked from accessing the area and reporting on the event.

The West Papua National Committee called for this Third Papuan People’s Congress and one of the aims of the Congress is to select a new leadership.

“This heavy and disproportional deployment of force is a threat to the security of a peaceful gathering of indigenous Papuan people,” said Wong Kai Shing, Executive Director of the Asian Human Rights Commission. He went on to say, “It is the duty of the Indonesian authorities to protect their right to freedom of expression and assembly and to refrain from causing any intimidations or making threats.”

Thousands of indigenous Papuans joined a march in Jayapura/Abepura to inaugurate the event earlier this week. An estimated 4000 persons are reported to currently being attending the event on its third day. However, several expected participants have either left the location or decided not to attend following the heavy and intimidating show of force by the army and police. About 2200 members of the security forces were reported to have been mobilised in the wider Jayapura area.

“For more than 50 years now, the Papuan people have not had the space to talk about their identity. As a democratic country, Indonesia should ensure public space to discuss diversity. Threats and intimidations should have no space in a country that has overcome authoritarian rule,” said Markus Haluk, a civil society leader.

Organisers fear that an intensification of the unspoken threat of action by the security forces may escalate the situation and result in many persons being injured or even killed by the ensuing violence.

SRI LANKA: A man is illegally arrested, tortured and laid with fabricated charges by the Udugama Police »