(Hong Kong, December 10, 2014) The family of Renante Gamara, a labour leader who was tortured and detained over fabricated charges, has informed the Asian Human Rights Commission (AHRC) that the court will decide on Renante’s appeal to dismiss that charges against him tomorrow, December 11.

In her email to AHRC, Nicolette Gamara, daughter of Renante, explains that the Regional Trial Court (RTC), Branch 266, Taguig City, is expected to release its Resolution on her father’s “Motion to Dismiss Case and Quash Warrant of Arrest.”  The court hearing will be at 8 a.m. at the Taguig Hall of Justice (in front of Camp Bagong Diwa). 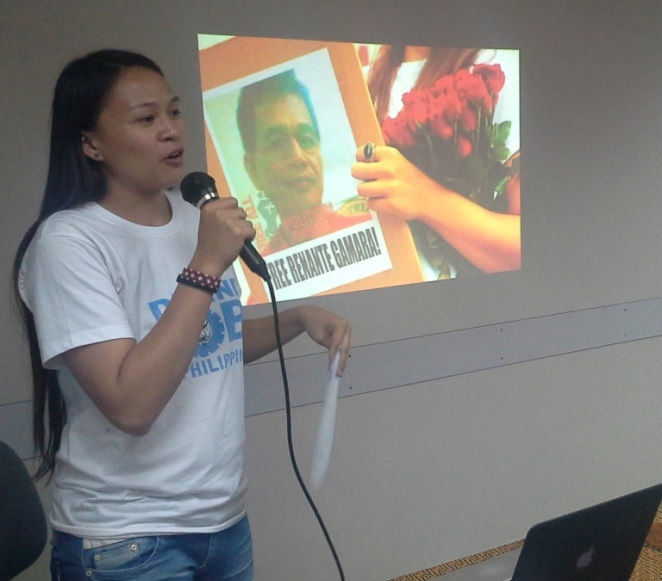 Renante was arrested on April 3, 2012, at the parking lot in Star Mall, Las Pinas City, Metro Manila. After his arrest, he was taken to the Crime Investigation and Detection Group (CIDG), of the Philippine National Police, Camp Crame, Quezon City. He was charged with kidnapping with murder. In absence of his legal counsel, Renante was interrogated by intelligence officers attached to the Intelligence Service for the Armed Forces of the Philippines (ISAFP). Renante remained in jail for nearly three years.

Renante’s wife, Amelita Gamara, also a labour leader, was among a group previously charged with a fabricated murder on a separate occasion. The court dismissed the case against her and her colleagues.

Arbitrary arrest, detention, and prosecution of human rights and political activists on fabricated charges, is commonplace in the country.

Apart from tomorrow’s hearing, on December 4, the families of those in jail mark the International Day in Solidarity of Political Prisoners, by holding a protest at the Department of Justice (DoJ) headquarters, in Manila City. The families and relatives of the detainees were demanding for the release of their loved ones, and dropping trumped up charges filed against them.

Nicolette, who also heads their network, Tambuli ng Mamamayan Network against Political Persecution, wants the public and the government to pay attention, by drawing the experiences of her parents.

“As the day marked the start of the Human Rights Week, political prisoners incarcerated in different jails and detention centres all over the country joined the nation in reminding the government of its neglect and disregard of human rights,” Nicolette, head of the Free Renante Gamara – Free All Political Prisoners Campaign.