Home / News / BANGLADESH: Petition to the Consulate General of Bangladesh in Hong Kong on the serious attack and attempted blinding of human rights defender and journalist Mr. FMA Razzak in Bangladesh

BANGLADESH: Petition to the Consulate General of Bangladesh in Hong Kong on the serious attack and attempted blinding of human rights defender and journalist Mr. FMA Razzak in Bangladesh 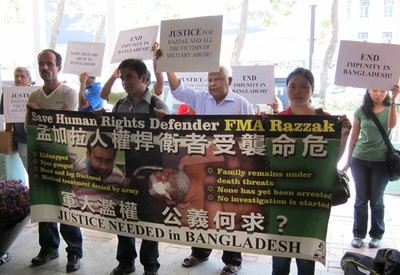 The petition is concerned about the attack against a human rights defender and journalist Mr. FMA Razzak in Paikgachha of Khulna District in Bangladesh on 29 April 2011. According to the information received by the AHRC, on 29 April 2011 a group of men, allegedly acting on the orders of Major Mustafizur Rahman Bokul, attacked Mr. Razzak and his brother, causing them severe injuries. The men, led by the younger brother of Major Mustafizur Rahman Bokul, allegedly tried to blind Mr. Razzak by pushing their fingers and objects into his eye sockets, until they bled. However, members of FMA Razzak’s family led the police to the scene of the beatings. The two victims of the attack were brought to hospital.

Currently, Mr. Razzak is getting treatment at a hospital, where due to the high publicity of this case, the Minister for Health and Family Welfare, Dr. AFM Rahul Haque, visited him on 3 May. Meanwhile, Mr, Razzak is still in a critical condition. He suffered fractures in his arms and legs. His eyes are so severely injured that he may lose his eyesight. The lives of his family members remain at risk.

The latest development is that local police arrested four people after Razzak’s family lodged a complaint. However, the key perpetrators are still free, especially Major Mustafizur Rahman Bokul who is still serving in his army post.

The representatives of the aforementioned groups delivered an open letter to the consulate and had a brief meeting with the Consul General, His Excellency Mr. Ashud Ahmed. In the open letter, they urge the Government of Bangladesh to take up the following matters as a matter of top priority:

1. That Mr. FMA Razzak obtain the best medical care available, at the expense of the state, until he has achieved full recovery or the best possible recovery.

2. That Major Mustafizur Rahman Bokul be suspended from the Bangladesh Army immediately, pending a full investigation into this case.

3. That there be a genuine criminal investigation resulting in the arrest and prosecution of all alleged perpetrators.

4. That Mr. FMA Razzak and his family be given full protection, housing and other needs throughout the course of this investigation and subsequent trial, and receive full redress and guarantees of security for the future.

“On the 150th anniversary of the birth of Rabindrantha Tagore it is shameful to have had such a brutal attack in Bangladesh. This attack shows the gravity of the problem of human rights abuses committed by the members of the security forces. The Government of Bangladesh must take a determined intervention to conduct genuine and full criminal investigation to hold the perpetrators accountable in a court of law. The Government of Bangladesh should use this case as an opportunity to take a stand against human rights abusers in the security forces.” Basil Fernando, director of policy and programmes at the AHRC, said.

The full details of the case can be found in the following links: