(Hong Kong, June 20, 2012) On June 26, to commemorate the United Nations’ International Day in support of victims of torture, the Asian Human Rights Commission (AHRC) and Centre for Comparative and Public Law (CCPL) at the University of Hong Kong are jointly organizing a series of public events to raise awareness about torture, and support victims of state-sanctioned violence.

The first event is a public lecture by Indian psychologist Dr. Rajat Mitra. He will share his knowledge of behavioural science evidence, drawing from over 20 years of work that he has done in support of victims of torture. Dr. Mitra has extensive experience with the Indian criminal justice system, particularly in prisons and with the police. 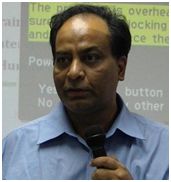 “Behavioural Science Evidence and the Courts: Providing Support to Victims of Torture in the Courtroom and Beyond”
June 21 (Thursday), 2012, 7pm- 8:30pm
Theatre 1, Meng Wah Complex
The University of Hong Kong

About the speaker and his topic: http://www.humanrights.asia/issues/torture/international-day-against-torture/2012-06-26/20120621HKU-Mitra.jpg

On June 25, there will be a media briefing and discussion with local and international journalists. Four people will speak at this event; three former journalists and the widow of a murdered journalist. They will discuss the importance of the prevention of torture to promote freedom of expression and public opinion in Asia. 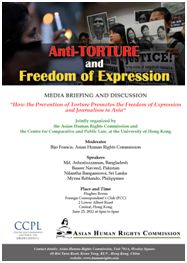 The speakers are Md. Ashrafuzzaman, Bangladesh; Nilantha Ilangamuwa, Sri Lanka; and Baseer Naveed, Pakistan. These journalists have been actively involved in advocating for the prevention of torture so as to promote free expression in their respective countries.

The fourth speaker is Myrna Reblando, the widow of Alejandro “Bong” Reblando, one of the journalists murdered in the 2009 Maguindanao massacre. She will share her experience on the impact of extrajudicial killing, forced disappearance and torture, particularly targeting journalists, on the freedom of expression in the Philippines.

Since seating is limited, those who are interested in attending any of these events are encouraged to contact Erin Donelson (erin.donelson@ahrc.asia) to confirm your attendance.

About the speakers and their topics:
http://www.humanrights.asia/issues/torture/international-day-against-torture/2012-06-26/2012eventspeakers.pdf

On June 26th, there will be a two-panel discussion. The first panel will discuss the prevention of torture in Asian countries, particularly south and south-east Asia. The second panel will discuss issues facing torture claimants and refugees in Hong Kong.

“In the World of the Survivor: Prevention of Torture in Asia; Torture claimants & refugees in Hong Kong”
June 26 (Tuesday), 2012, 2pm – 5pm
Room 201, 2/F Main Building
The University of Hong Kong

SRI LANKA: The Human Rights Action Plan will be like the Presidential Task Force for Dengue Prevention  »