(Hong Kong, June 3, 2014) The Asian Human Rights Commission on Tuesday launched a new webpage in response to the military coup in Thailand of May 22.

The webpage contains links to the Hong Kong-based regional human rights organisation’s commentary and appeals concerning the coup, in English and Thai, as well documents related to the coup and links to external sites. 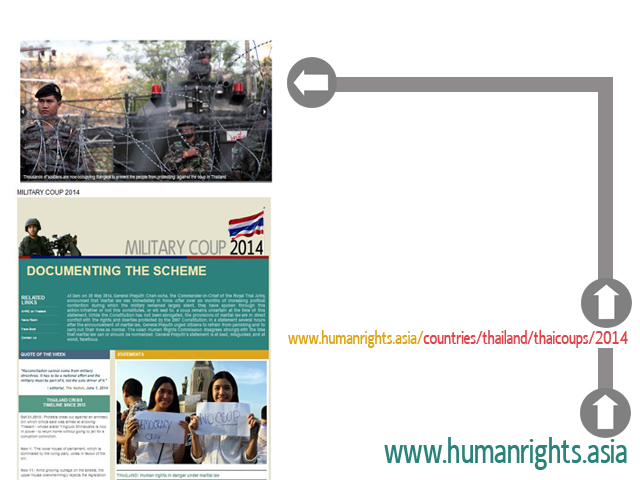 The webpage address is http://www.humanrights.asia/countries/thailand/thaicoups/2014

The AHRC executive director, Bijo Francis, said that the group condemned the coup in the strongest possible terms.

“This military takeover is a massive setback for human rights in Thailand, a manoeuvre that is aimed at pulling the country back to a human rights stone age, when the military could do literally anything in the name of protecting national security,” Francis said on the launch of the page.

“The AHRC will speak strongly, loudly and consistently against this military takeover and its ramifications, as it did in 2006,” he remarked.

During the last military coup in Thailand, during 2006, the AHRC was one of a small number of groups who recognised the implications of the takeover, and issued repeated warnings about its consequences. A collection of statements in response to that coup can be found here: http://thailand.ahrchk.net/docs/AHRC_Thailand_Coup_2006.pdf

Whereas the coup leaders in 2006 succeeded in engaging in a propaganda event whereby they cast themselves as vanquishers of an evil government, their troops complete with smiling faces, flowers and yellow ribbons, their successors in 2014 have abandoned such pretences.

The stream of announcements and actions following the coup has targeted people in civil society whom the military think will be critical of them. People called to report themselves include journalists, human rights defenders, and academics.

“We especially condemn the blatant threats made to human rights defenders and civil society in Thailand by this new military government,” Francis said.

“Quite obviously they are not going against people who threats to public safety or national security but people whom they consider to be their enemies,” he observed.

“We urge members of human rights groups and civil society organisations around the world to show their support through public actions, fund raising, and where necessary, assistance for people who have been forced to leave Thailand temporarily because of the coup,” Francis concluded.

The coup leader, army chief General Prayuth Chan-ocha, has recently said that it would be at least a year before he is willing to hand power back to a civilian government, a situation that the AHRC director described as “intolerable and completely unacceptable”.