(Hong Kong, 4 December, 2015) “The surviving, present day youth in Northern Sri Lanka face a grim future. Society is just recovering from three decades of devastating civil war. In the current post war context, the future of the community depends on rebuilding broken social structures in which youth can play a crucial role”, writes Dr. Daya Somasundaram, a well-known Sri Lankan scholar on Psychiatry in the cover story of Torture: Asian and Global Perspectives. 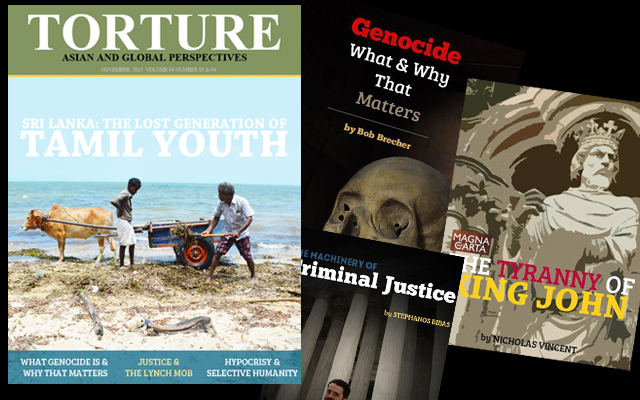 He continues, “to understand the predicament of today’s youth, it is necessary to understand their past, current psychosocial context and the educational system. There is a popular caricature of male youth, particularly among critical elders, that they hang around street corners, smoking, drinking and harassing females.”

In his latest essay, Dr. Daya Somasundaram analyses the impact of past war trauma, present psychosocial context, education and the globalisation of post-war society on the Tamil youth of Northern Sri Lanka. The full text of the essay will be available in the latest issue of the magazine.

The forthcoming issue also contains a contribution by Stephanos Bibas, Professor of law and criminology at the University of Pennsylvania Law School, and a leading scholar of criminal procedure with expertise in criminal charging, plea bargaining and sentencing. He is the author of The Machinery of Criminal Justice.

Meanwhile, writing on Genocide, Bob Brecher, Professor of Moral Philosophy at the University of Brighton, and Director of its Centre for Applied Philosophy, Politics & Ethics notes that, “Genocide is a paradigm case of denying our fundamental equality as people: my identity is fine; yours is impermissible. People like me are real people; people like you are cockroaches, lice. You must die on account of who you are. As with torture and with rape, so with genocide. They are the worst things we do to one another. ”

On the subject of the Magna Carta at 800 years, one of dominant minds on the issue, Professor Nicholas Vincent of the University of East Anglia, unearths fascinating historical insight behind the Great Charter:

“What was wrong with John? For a start, there was his name. He was born the youngest of Henry II and Eleanor of Aquitaine’s many children, on Christmas Eve 1166 or 1167. The uncertainty here itself demonstrates quite how low John stood in the family pecking order. His four elder brothers William, Henry, Richard and Geoffrey had all been named after previous kings of England or dukes of Normandy. John was a cuckoo in this particular nest, named for no apparent reason save perhaps for the proximity of his birthday to the feast of St John the Evangelist (27 December), and as a male counterpart to his elder sister Joan, born a year or two before him.”

The issue also contains an article encouraging the reform of Myanmar’s legal system from within by Basil Fernando, Director Policy and Programmes of the AHRC and ALRC, as well as the work of Therese Rytter, Director of Legal Affairs & Advocacy at the Danish Institute Against Torture ( DIGNITY).

Tisaranee Gunasekara, Ron Jacobs, Binoy Kampmark, Ahlam Chemlali and Javeria Younes contribute their regular columns. Torture: Asian and Global Perspectives is a bi-monthly magazine which focuses on torture and its related issues globally. Writers interested in having their thoughts and research on this subject published, may submit their articles for consideration to torturemag@ahrc.asia