Home / News / WORLD: The Lost Cause – the latest issue of Torture magazine is now available

WORLD: The Lost Cause – the latest issue of Torture magazine is now available 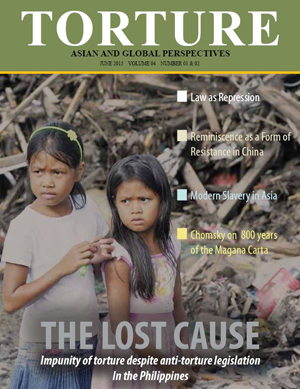 ( Hong Kong, August 28, 2015) Carlos Isagani T. Zarate concerns himself with impunity for torture in the Philippines despite anti-torture legislation. The Member of the Philippine House of Representatives from Bayan Muna Partylist observes that, “The Philippine government, run by the elite classes desperate to protect their hold on power, are anxious to allow their war dogs to use any method necessary to maintain the status quo. In order to instil fear among the people, to prevent dissent and uprising, the ruling elites will accept the military’s use of torture.”

Meanwhile, Marjorie Cohn asserts, “there is absolutely no justification for subjecting any human being to torture. It is just plain wrong.”

In an interview with Torture: Asian and Global Perspectives, the professor of law at the Thomas Jefferson School of Law, San Diego California, continued:

“Torture and cruel treatment of individual prisoners can be challenged in the criminal justice system. But a much broader strategy is necessary to end torture once and for all. There must be a national consensus that torture is wrong, illegal, and counter-productive, and must never be used under any circumstances.”

JOURNALISM & HUMAN RIGHTS : PROTECTING YOURS AND OTHERS’ RIGHTS

A NATION FOR OUR CHILDREN

Chomsky on 800 years of the Magna Carta

THE TOXIC LEGACY OF THE MAGNA CARTA AT 800 YEARS

PROHIBITION ON MOURNING: REMINISCENCE AS A FORM OF RESISTANCE

DEATH AND THE BLOGGER(S)

THROUGH A GLASS DARKLY : TARIQ AZIZ AND IRAQ’S TRAGEDY

THE FLOATING CEMETERY: UNWANTED AND ABANDONED AT SEA

THE MURDERER AS HERO

The new issue of Torture: Asian and Global Perspectives is now available at www.torturemag.org